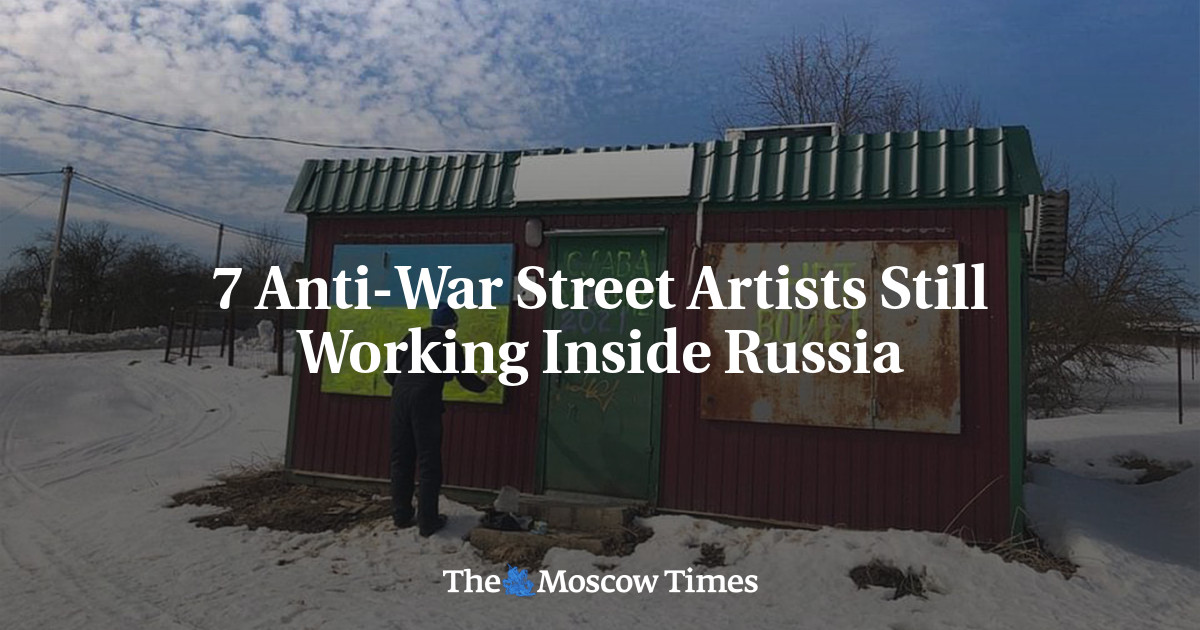 From the very first day of the invasion of Ukraine, anti-war art spilled onto the streets and squares of Russian cities. And, despite detentions and fines, they continued to protest Russian militarism for 10 months.

The Moscow Times selected seven of the most persuasive anti-war artists and spoke to some of them about their work and their lives.

The St. Petersburg experimental art group Yav (“reality”) was founded by Anastasia Vladychkina. “The motto of my life is ‘what doesn’t kill me doesn’t make me stronger’,” she said.

Before February, members of Yav painted their murals on walls which many people could see, but after the war started, they started painting on abandoned buildings or fences — so there would be less chance of a fine.

One of their most recent works is called “A Window onto Europe” and was painted in an industrial district. This famous phrase was first used by Venetian poet Francesco Algarotti while traveling in Russia. Later, the poet Alexander Pushkin used it in his poem “The Bronze Horseman”. Today St. Petersburg is still often called Russia’s “window to Europe,” but in Yav’s work the window to the West is covered with concrete bricks spattered with blood.

The anonymous underground artist Coin began painting a series of terrifying creatures when opposition leader Alexei Navalny was arrested in 2021. Since then, Koin has published devastating portraits of Russia’s politicians and elites on social media as grotesque vampires and monsters.

Although not strictly speaking a “street” artist, his work is widely available online, especially on social networks.

“I stopped painting some time ago because I didn’t want to work on this horrible theme anymore, I didn’t want anything to do with dirty politics… But after February 24th I started again, and now I just can’t stop not . I was depressed and disappointed by the war and what people thought about it. I was disappointed in people. I don’t really know how to live with that. Maybe it sounds selfish, but I make art because it helps me. I release the toxic emotions that poison me – anger, rage, fear, disgust. I know that my work helps other people with that too,” Koin told The Moscow Times.

Yelena Osipova wash called “the conscience of St. Petersburg.” The 77-year-old pensioner has been protesting against Putin’s regime for two decades. Although she has been fined and arrested many times, she will not stop – even in wartime.

On the May 1 holiday, she took her latest work to the city’s main street, Nevsky Prospekt. Her painting had the words “international solidarity”, “no war” and “21st century: wars are killing humanity” on it.

Journalists Yelena Lukyanova and Alexei Dushutin of the independent media office Novaya Gazeta took her down and was standing next to her when the police arrived. The journalists were sent to the police station, the police officers took Osipova home – and the painting was confiscated.

Perm street artist Fffw create provocative street art about life in Russia. But sometimes the provocation is not provocative at all. On December 24, he was detained while working on a new piece of street art called “See you…” written in different languages, including Ukrainian.

Ffchw’s favorite piece is called “Only rain should fall from the sky.”

“All my artworks are done from the bottom of my heart, and I don’t regret anything,” he told The Moscow Times.

“After February 24, I had to find a new language for my statements. My art is divided into ‘before’ and ‘after’. Now it is also accompanied by many emotions such as guilt and fear about the horrific and catastrophic events that are taking place. I am sure that art can change lives, but will it be able to change the regime? I do not know.”

Vladimir Ovchinnikov85, is a famous figure in Borovsk, a small town of 10,000 people not far from Moscow.

Ovchinnikov was fined 35,000 rubles ($475) earlier this year for a drawing of a little girl wearing the colors of the Ukrainian flag with three bombs falling on one of the buildings in his town. Under her image, he wrote: “STOP.”

The mural was painted over, but later Ovchinnikov painted a new piece in the same place – the word “bezumie” (“madness”) in Russian with the Latin letter Z – the Kremlin symbol of his “special military operation.”

The works of one of the most famous Russian street artists, Misha Marker, almost as soon as they hit the streets of St. Petersburg appeared, painted over. But that doesn’t stop him. Before the war, his work was displayed in many galleries and museums, including the Russian Museum. Marker hides his face in public so no one knows what he looks like — or his age.

In recent works, he uses five snowflake-like stars as a substitute for the Russian word for “war” (the word is banned under Russian law and people are supposed to use the phrase “special military operation” instead).

Like many other Russian street artists, Zoom does not reveal his real name or appearance and speaks to his public through social media and graffiti.

His works used to appear on the streets of Moscow, but now he works mostly in St.

His recent painting “Turnip” is a reference to the famous Russian folk tale “The giant turnip.” In this story, a grandfather plants a turnip, which grows so large that he cannot pull it up himself. He asks his wife, but even together they can’t pick it up. Then their granddaughter and pets are recruited to help too, until they finally pull the turnip out of the ground.

Zoom painted his version of the story with a nuclear explosion and skeletons on Ulitsa Khersona, named after the Ukrainian city occupied by Russian forces for 8 months this year.

“I first showed this work at a solo show a few years ago, but its street version is more relevant now than ever. People see that this is not a joke,” Zoom told The Moscow Times.

“We live in traumatic but very interesting times. My personal challenge is to create works that unite people and prevent them from dehumanizing others. If that’s not what art is for, then what is it for?”

New year, fresh house: tips and tricks to get your year off to a clean start | Entertainment/Life