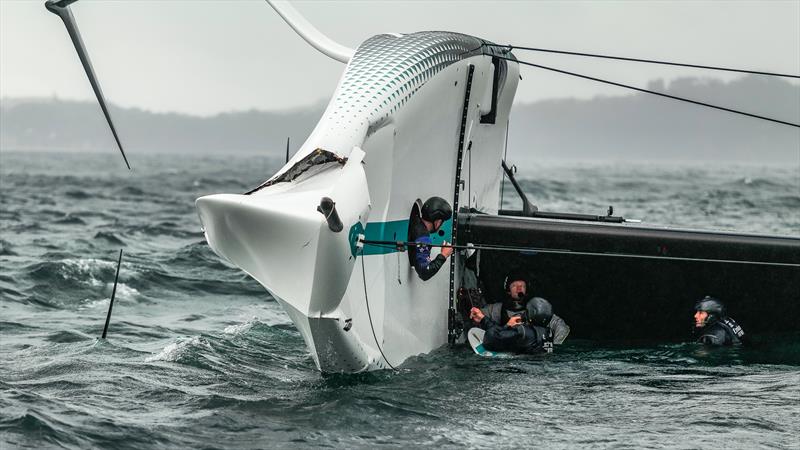 Emirates Team New Zealand has announced the design and construction changes that will be incorporated into existing and future AC40 buildings.

The changes were developed as a result of the catastrophic structural failure that occurred after the violent nose dive of the team’s LEQ12 on Tuesday. The test yacht had been taken out of AC40 One Design mode a few days earlier, and with the addition of a new test wing blade, was classified as a test or prototype AC75 (LEQ12) at the time of the incident.

The LEQ12 buried its bows during a very steep, sudden and violent nosedive while testing in waves on Auckland’s Hauraki Gulf, resulting in damage to the forward sections of the hull and deck structure. While the team was on the water recovering the yacht and returning to the dock, the team’s engineers immediately began reviewing onboard data to identify the root cause of the problem.

“The first things we look at in this type of dynamic event are the accelerations and rotation rates coming from yacht’s inertial measurement unit (IMU),” explains Jamie Timms, Emirates Team New Zealand Structural Engineer. “These readings allow us to derive the magnitude of the hydrodynamic loads on the hull structure, which we can then feed into our structural simulations to estimate the stress state and structural safety margins. We also use the data to run our fluid dynamics simulations of high velocity hull impacts.”

“During the 36th America’s Cup we captured and cataloged the dynamics of every major event across the three yachts we sailed in that campaign and we enveloped them, with additional margin, to define the load cases for the AC40. About the first 18 days from when we sailed the AC40 we saw some events that caused major impacts.This was consistent with our design cargo boxes and the hull structure performed as expected.However, this latest event experienced accelerations that were far beyond was than our previous records.”

“The figures above compare the longitudinal and lateral decelerations of the AC40 crash with the largest event seen by Te Rehutai, the team’s AC75 from the last America’s Cup.

“Not only did we see longitudinal decelerations 70% higher than the previous worst case, but this was coupled with a simultaneous lateral loading of similar magnitude – the yacht came to a complete stop and yawed 90 degrees in just over a second .We believe it was this combined load condition that led to an initial failure of the foredeck sandwich panel.The damage we saw in the hull and partial detachment of the bow structure is likely a result of the compromised deck panel, rather than a root cause.”

With this new data in hand, the team’s engineers designed an in-house structural upgrade package that will be rolled into all current and future AC40 yachts.

“During the development of this class we have seen the yachts become increasingly dynamic as the performance of the yacht and the skills of the sailors grow. As with any high performance vessel there is a constant balance between reducing mass and ensuring of reliability and safety, and as our understanding of the class grows, we are evolving our approach to maintain that balance. This additional structure will restore full structural margins for the upgraded load cases and allow sailors to safely and confidently push the performance limits of the class to move. .”

The internal structure upgrade package will be built by McConaghy’s, which builds the fleet of AC40s.

“The good news is that there will be no change to the delivery schedule for the remaining AC40s currently being built and the bow upgrade package will soon be shipped from the McConaghy yard for retro-fitting to the three AC40s already delivered.”

The Pagani Huayra’s Breathtaking Interior Is An Absolute...