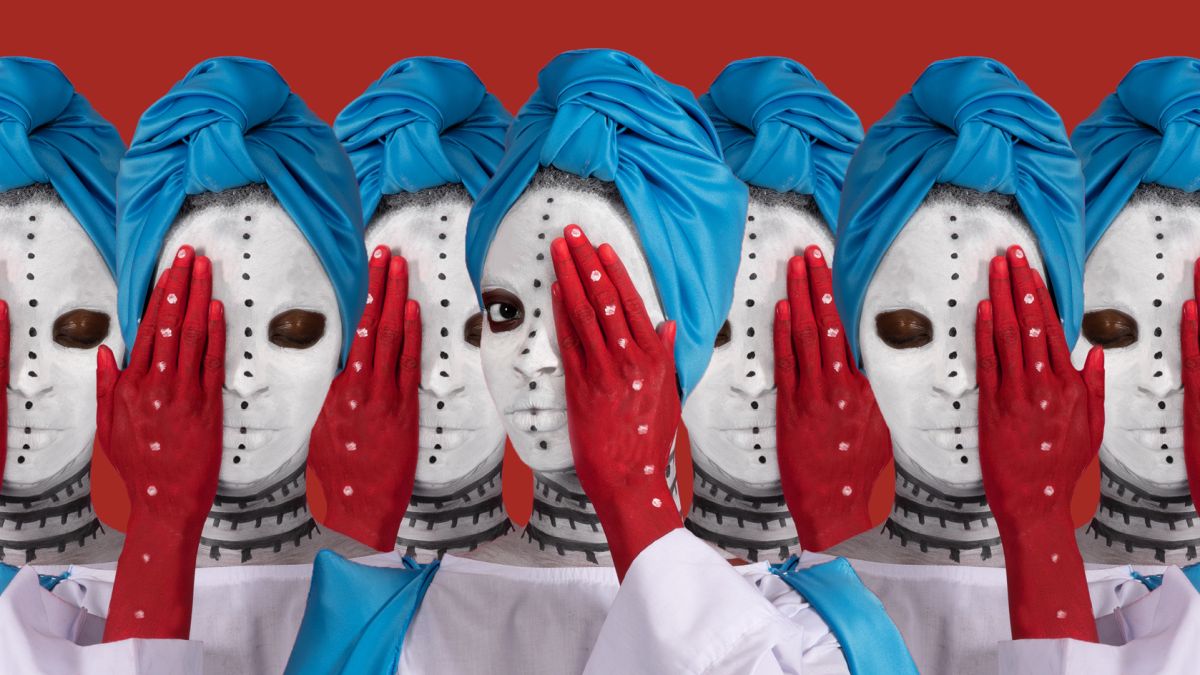 Aïda Muluneh has been turning the global perception of Africa on its head for a long time. The Ethiopian photographer’s instantly identifiable visual language is a striking mix of surrealism and sharp, vivid references to Ethiopian culture and the lives of women. Through graphic, shadowless planes and deft deployment of Photoshop, her primary color-saturated works weave a complex web of domesticity and politics, fact and fantasy, subtle symbolism and poignant candor.

Muluneh’s first show at Dubai’s Efie Gallery highlights her ability to harness art as a tool for change. Titled ‘The Art of Advocacy’, the show spotlights works from award-winning series such as Water Life 2018, (commissioned by WaterAid and shot in the salt flats of Dallol, one of the driest, hottest and most inhospitable places on earth), addressing the impact of water deprivation on women’s liberation, health, sanitation and education, and The Path of Glory (2020), commissioned by the Nobel Peace Prize exhibition that examines how food and hunger are used as weapons in war. “I purposefully chose works that respond to themes of human rights, environment, conflict and health as they are still common global issues,” Muluneh tells Wallpaper*.

Each project, the artist explains, ‘is related to encounters that I have experienced in my personal life and also in my professional career as a photojournalist. After working closely with various communities for many years, the artistic interpretations of unspoken realities manifested in the images presented,’ she says. ‘The work aims to raise questions, to provoke curiosity and to suggest a different visual aesthetic as it relates to the presentation of the challenges facing Africa – something that often falls victim to the foreign gaze as it relates to visual representation in the international media.’

Next door, Muluneh will display a new work being shown for the first time, in which the artist explores a new process of hand-painting acrylic on photographs. ‘I wanted to advance my approach to photography by combining digital and analogue work as a form of mixed media,’ she explains.

For Muluneh, advocacy extends to the position of art institutions in Africa and the global South. ‘As someone who has worked across Africa, the gallery’s core values ​​of creating bridges through art is something that is needed in the UAE,’ says Muluneh, who has exhibited at the likes of MoMA and The Smithsonian. ‘The need to support African-led galleries such as Efie Gallery is part of the development of an art landscape that extends beyond Western and European institutions.’

‘Aida is able to transform natural environments into what can be considered otherworldly environments. Furthermore, as opposed to a mere background, these landscapes are presented as an active agent in Aida’s storytelling, exemplified by her WaterAid commission,’ says Kwame Mintah, co-founder of Efie Gallery, which specializes in artists from Africa origin. ‘In the works, viewers are directed to focus on the barren landscapes within which Aida positions her models and in turn the models and the environment convey the same story of the harsh reality of water scarcity.’

Through her activism, Aïda Muluneh frames Africa not as a monolithic identity, but as a broad cultural tapestry. Her figures are stoic, dignified and resolute as they look down Mulenuh’s lens, questioning the gaze the world has long been accustomed to and making them look tougher. ‘The role of art for me is to document the present and raise questions related to our humanity. Throughout history, regardless of region, artists have played an important role in preserving the changing dynamics of a community, country and region, concludes Muluneh. ‘Creativity is a tool that stimulates the imagination and provokes an audience’s subconscious to a conscious response.’

Farmhouse Style 101: Everything You Need to Know