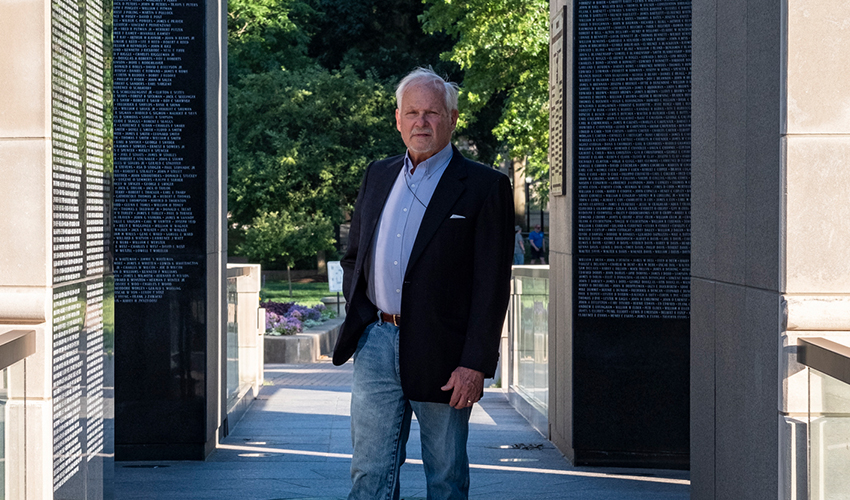 Photo by Roger May
Ohio University graduate P. Joseph “Joe” Mullins, MFA ’78, is one of more than 10,000 West Virginians who served and died in the first four wars of the 20th century, whose sacrifices are honored in the West Virginia Veterans Memorial Designed in memory of him.

As a young man, P. Joseph “Joe” Mullins, MFA ’78, volunteered for the 1960 draft, early in the Vietnam era. Serving his country would change the trajectory of his life, ultimately leading to a huge opportunity to ensure that his fellow West Virginians — those who made the greatest sacrifices — are never forgotten.

“Going to college was a pretty far-fetched idea,” the Charleston, West Virginia resident recalls entering the workforce after high school.

One winter, he found himself fired from a construction job, the house ran out of food, his mother was in the hospital, and friends who had volunteered for the draft knocked on the door, prompting Mullins to join them.

“I knew I could leave in two years, and it would be at least another month before I could be called back to work, so I decided to leave it out,” Mullins said.

He spent the next two years in the Army Infantry and was stationed in Germany during the 1962 Cuban Missile Crisis.

“We were the new kids on the block. They put us in front of East and West Germany. We didn’t even know the Cuban missile crisis was happening,” recalls Mullins. “But they sent 88 doses of morphine to our platoon, so they were expecting severe pain. … We were then sent to Berlin.”

During his service, Mullins became known for his shooting skills, which he had developed since his childhood summers hunting with his father. Of his 220-man company, he had the best marksmanship and served as machine gun squad leader.

Mullins had the skill and respect of his comrades, but he said, “he was inferior to me in every way,” and being inspected by his lieutenants made him realize something.

“He has a college degree; that’s the only reason he’s in charge. There are things you can’t do just by being a good person. You need an education,” Mullins said of the moment. “I remember the position. I remember where the sun was in the sky. At that moment, I thought I was going to get a college education. I set my sights on that.”

An aptitude test showed that a career in architecture matched Mullins’ skills so well that he enrolled at Morris Harvey College, now the University of Charleston, to study art—the closest he could find to a major in architecture . There, he met Ohio University alumnus James Gibson, MFA ’61, who taught sculpture and gave Mullins a glimpse into a field he didn’t even know existed.

While completing his undergraduate degree, he landed a job with the state planning office in West Virginia. Mullins felt that his art degree was “just enough” for the position, and he began considering an advanced degree.

He and a group from Charleston decided to join Mullins in graduate school at Ohio University for the same program his former sculpture professor Gibson was doing: the MFA in Sculpture at the Academy of Fine Arts.

“It’s something that’s within reach when you try to do other things in life,” Mullins said. “You have to reinvent yourself to a certain extent. It helps if you let other people reinvent themselves at the same time.”

In Ohio, Mullins found this sense of community.

“Ohio University had an excellent group of graduate students and a group of brilliant, fascinating people at the time,” recalls Mullins, who studied with Henry Lin, the late professor emeritus of ceramics and former dean of the Academy of Fine Arts. “It’s the only place where I feel completely accepted, comfortable and with my family.”

Mullins leaves Ohio with not only a master’s degree, but also 20 pounds lighter and debt-free — thanks to his GI benefits, scholarships and creative planning, near Zaleski State Park Build a small house and serve as a night watchman. Local worm farmers.

“It covered my housing costs, so I was able to get through the OU and never borrowed a penny,” he said.

He returned to West Virginia as a sculptor, went on to serve as executive director of the Parkersburg Arts Center, and opened his own art studio in Charleston.

In 1987, Mullins was given a once-in-a-lifetime opportunity and the opportunity to serve his country through sculpture. Mullins’ design — about 180 submitted designs — was selected for the West Virginia Veterans Memorial, a nearly $4 million tribute to the more than 10,000 West Virginians who served and died in the four wars 20 years agoth century.

The two-story oval memorial was built on the grounds of the West Virginia State Capitol and is surrounded by a reflecting pool. The names of the dead are engraved on the black granite of the interior walls. Four 7’2″ bronze statues – sculpted by Mullins – in alcoves located on the outer walls commemorate each conflict and branch of the armed forces: Infantry of World War I, World War II sailors, Korean War pilots and Vietnam War Marines.

Mullins, who is committed to building a “world-class monument,” conducted extensive research while working on the project, talking to veterans, reading books, and even traveling to Vietnam.

The memorial broke ground in 1990, and the last of the four bronze statues was installed in 1999. Mullins points out that the job incorporates a mix of skills — from masons and cement finishers to trenchers — and even some Ohio State college connections.

“They poured in the purest bronze…I think the bronze portion of the memorial is an all-OU event, which makes a lot of sense,” Mullins said.

Just as work on the West Virginia Veterans Memorial was complete, Mullins was called upon again—this time on a bronze statue to honor the state’s female veterans. He completed the work in 2003, but disagreements over the statue’s costume and location delayed its installation until 2010.

Now largely retired, Mullins looks back on his career – a journey he describes as “fame over wealth”.

“Oh, my greatest job!” quipped Mullins, referring to “Mortar Man,” a 4-inch by 4-inch-by-4-inch piece he quietly created with extra concrete while working on a restoration project in downtown Charleston. 2″ sculpture. Tucked away on a ledge between two buildings, the “Mortar Man” sat there years before no one noticed him. Today, the “Mortar Man” is one of the top ten attractions in the city.

But just a few miles away is the masterpiece that Mullins will forever be remembered for.

“Every single person named on the Veterans Memorial was the most important person in someone’s life and was taken away during the prime of their life,” Mullins said, who heard when family reached out to him The stories of many of the fallen ensure that their loved ones are included in the memorial. “I think they deserve something to show that there is a nation and a nation that appreciates their service and that their sacrifice and upholding the oath they took to be recognized – to defend the Constitution from all enemies at home and abroad. Without the Constitution, America Not America.”