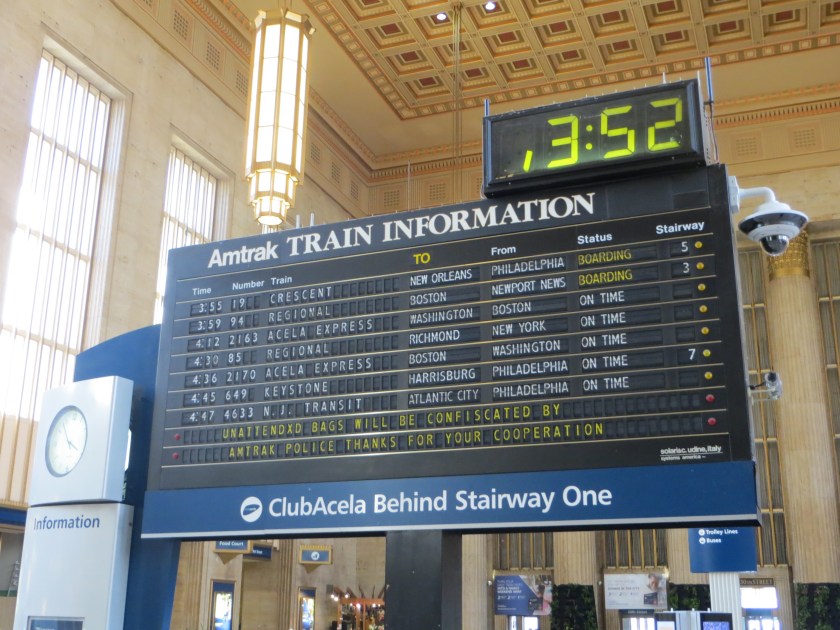 Eight years after news broke that the iconic split-flap departure sign at 30th Street Station would be taken down, and nearly four years after it was actually dismantled, officials have confirmed they are bringing it back to Philadelphia’s Amtrak hub.

The downside for fans of the classic Solari screen: it’s only returning as part of the decor, not a functional wayfinding device.

That’s been the plan since 2019, when an Amtrak spokesman told Billy Penn that a requirement to include the Italian-made flipboard at the historic station was made part of the RFP for its $400 million renovation.

Discussion of the flippy board’s fate began in 2016, and was recently reignited by Brendan McPhillips, who served as campaign manager for Sen.-elect John Fetterman and is rumored to be working on a Philadelphia mayoral campaign next.

After McPhillips tweeted a lament that the old-fashioned sign had been replaced with a digital version — as is common among travelers who have grown accustomed to and fallen in love with the split flap’s soft flutter as it’s updated with new course information, so otherwise than the flash of ubiquitous digital screens—he called from the office of U.S. Rep. Brendan Boyle heard.

“Our beloved click-clack sign will return to 30th St upon completion of the remodeling,” McPhillips posted.

However, plans for its return have not changed, Amtrak spokeswoman Beth Toll told The Inquirer. “As part of the ongoing master development at Gray 30th Street Station, Amtrak continues to work with our developer partner to [S]olari board into the station as a design element (not as a functional train information board) for all to enjoy,” the newspaper reported Toll as saying last week.

The flipboard was replaced as part of Amtrak’s system-wide effort to bring its departure displays into compliance with ADA regulations.

No hearing-impaired or visually impaired passengers were served accessible by the Solari board, advocates and officials said. Because it was not integrated with 30th Street’s public address system, some updates that were indicated visually were not delivered via audio. And the font used on the flip letters was difficult to see from a distance unless you had perfect vision.

Rep. Boyle was instrumental in trying to save the flippy board from the beginning.

“Accessibility is crucial,” the lawmaker said three years ago. “However, at 30th Street Station there is a tremendous opportunity to achieve these goals in a manner that also maintains the iconic character of the Solari sign – which thousands of passengers have spoken in support of. I remain committed to continuing my advocacy with Amtrak to reach such a resolution.”

The sign was manufactured by Solari di Udine, of Udine, Italy, and was installed at 30th Street in the 1970s. At the time it was one of dozens if not hundreds around the world.

Over the past two decades, technological advances and ADA advocacy have meant that split-flap boards have been relegated to curiosities. Local firm Oat Foundry creates custom versions for corporate clients — fast-casual restaurant Honeygrow, for example, installed one, as did the Shakespeare & Co. bookstore on Walnut Street.

30th Street Station was a holdout. The Metro North transit system replaced its network by 2014, and New York Penn Station got rid of its Solari sign in 2016.

Since being taken down in January 2019, Philly’s flip-flop has been behind glass at the Railroad Museum of Pennsylvania in Strasburg, Pa. Amtrak’s renovation is expected to be completed in 2025.