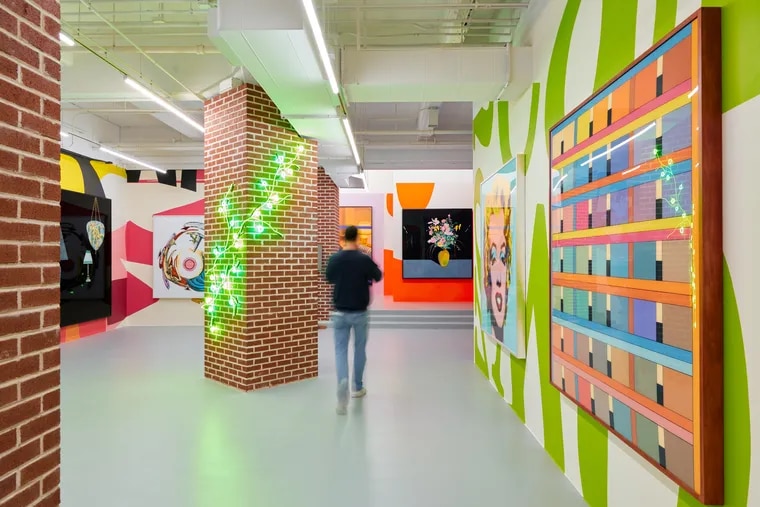 Where is Alex Da Corte?

Friday, January 13. It’s the opening night of his new show, “The Street,” at the Rosenwald-Wolf Gallery at the University of the Arts, and there’s no sign of the Camden-born conceptual artist.

It’s packed. Only an A-lister could attract 100 people to an art gallery. Da Corte has had a solo show at the Metropolitan Museum of Art, exhibited work at the Whitney and Venice Biennales, and is currently having a 20-year retrospective in Copenhagen.

I was warned that Da Corte might be hard to find tonight as he often appears in public in disguise or in costume.

Many characters wander through these walls. I see men with flowing hair and curly moustaches, leather jackets and gold chains, vintage sweaters and wire-rimmed glasses. So which one of you is Alex Da Corte?

To further confuse things, most of the guests face each other, rather than the artwork on the walls. “No one looks at paintings anymore,” says painter Sasha Budaev, who is talking to two friends. All three had their backs turned The Last House on the leftA 33-foot-long, pitch-black painting of lamps, chandeliers and a ceiling fan.

Tonight’s disguise turns out to be deceptively simple. Da Corte is one of the few people who wears a face mask.

When you manage to spot him, the next question can be just as difficult: When is Alex Da Corte?

“The Street,” like his previous work, samples from many decades of high art, pop culture and personal memory. Da Corte soaks up visual references from movies, museums, music and magazines. Disney and Donna Summer matter as much as Raphael and Rubens. Here, derivative is not a bad word but a guiding spirit. Pick up, cut and paste, throw out, move on.

The show nods to Pop Art from the start. On the wall behind the desk is a floor-to-ceiling mural of the Wonderbrood logo. A few steps later, we see Marilyn Monroe inside a black, six-foot-tall frame, an image clearly lifted from Andy Warhol. Warhol also lifted the image, tracing it from a publicity photograph and printing it in combinations of bright paint and black ink.

Da Corte made his copy, Mirror Marilyn, with acrylics and wax pastels, and rather than printing them, he painted them directly on the glass of the frame. This is a technique known as reverse-glass painting; every picture hanging in the show was done this way. No canvas, no panel, no paper – just paint on Plexiglas sheets.

As we take a conceptual step into “The Street,” we are immersed in Da Corte’s memories, footnotes, and creative tools. Vultures of Snow White. Old fashioned patterns that feel like grandma’s house. Album covers and paperback mystery book covers. The gallery is buzzing because everyone sees something in each piece, even though we all see different things.

Intimacy and autobiography distinguish Da Corte from his Pop Art ancestors; those known for impersonal, detached irony. “I’m attached,” Da Corte said over the phone a few days after the opening. “This is a love letter to Philadelphia, and also to the school that took me in and showed me so much of what I know today.”

Da Corte studied printmaking at the University of the Arts in the early 2000s. The show’s curator, Sid Sachs, was his art history professor.

In the 150 years we call Modern Art, the “high” (painting, sculpture) always borrowed from the “low” (mass culture), cut it into pieces, glued it back together, blew it all up. For Da Corte, this process always seems to come with the tape still visible, his source material is never hidden, but always the subject. The inspiration for “The Street,” he says, came Sesame street, comics, book covers and album art. But also Langston Hughes, some old-school French and German animators, and Philadelphia architects Robert Venturi and Denise Scott Brown.

I call the word nostalgia – because how could you not? — and he pushes back. “I never see it as nostalgia,” he says. “Wherever you go, you are, but you leave a trail behind. These traces never leave us, and we never forget. We are constantly re-understanding and adopting new things in an old way.”

It’s been 60 years since Warhol screenprinted Monroe and a century since Marcel Duchamp overturned a urinal. Will contemporary art be forever trapped in this kitschy loop of reference, self-reference and self-reference?

If you’re lucky enough to track down Da Corte, he reminds you that the past, no matter how murky or clichéd, can help you see the present. “I dig where I stand,” he says, describing his connection to UArts, to Philadelphia, to everything that came before. “My life is the way it is because of what you see on ‘The Street’, and I’m not afraid of that. I am very grateful for that.”

“The Street” is on view through March 10 at the Rosenwald-Wolf Gallery at 333 S. Broad St. Da Corte will host an artist talk February 1 on the University of the Arts campus. His video work will be screened at Lightbox Film Center on February 7. https://www.uarts.edu/gallery/alex-da-corte-street

Getting the shot: A photographer’s perspective on Wes Moore’s inauguration