Analysis: Banksyland and the spread of the immersive art experience 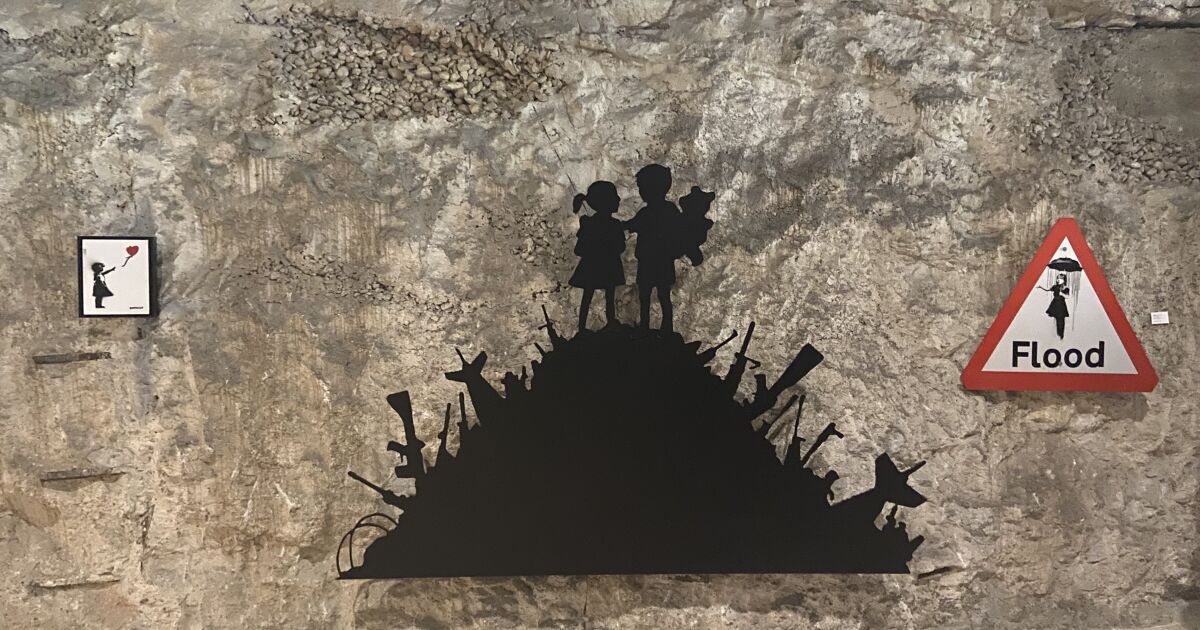 Anyone with a social media account has probably seen the ad.

“Dip into the world of Banksy,” reads one ad.

“Banksyland” is a nationally touring exhibition exploring the anonymous artist’s work, produced by the Portland-based corporation One Thousand Ways. It promises a riveting examination of “the world’s most notorious and elusive artist” via “80 pieces and installations.” Prices for a one-hour tour range from $22 for students to $59 for a “VIP experience.”

Look a little closer, and it’s revealed that “Banksyland” was unauthorized by the famous British street artist, known for his iconic graffiti murals that appear seemingly overnight. In fact, it is not even the first unauthorized immersive art exhibition dedicated to Banksy to tour the US, a trend the artist himself denounced.

“Nope. Banksy has NOTHING to do with any of the current or recent exhibitions and they are nothing like a genuine Banksy show,” reads a statement on the artist’s Pest Control website. “They might be crap, so please don’t come to us for a refund.”

There are certainly important moral, ethical and even legal questions at stake here: Is it right to take an artist’s work without permission or consent, however good, and display it to paying customers? Can an artist or their representatives, even those who are deceased or, in the case of Banksy, anonymous, legally do anything about these types of exhibitions? And, perhaps more interestingly, given the ubiquity of these types of immersive touring exhibitions, should the public even care whether an exhibition is authorized by the subject or their representatives?

The rise of the ‘comprehensive’ art experience

One of the most well-attended art exhibitions of last year was “Immersive Van Gogh.” The internationally touring exhibition is one of many immersive exhibitions dedicated to the iconic Dutch painter Vincent van Gogh. Depending on which of the van Gogh experiences someone attended, patrons are treated to larger-than-life projections, virtual reality experiences and, in one case, the opportunity to practice yoga under the immersion.

Art purists may find something subjectively off-putting about the exhibits, which contain none of the original art and charge up to $60 per ticket, but they are legally above board. According to an article in MarketWatch published earlier this year, the producers of “Immersive Van Gogh” deducted nearly $250 million from the 4.5 million tickets sold. The success of these exhibitions is indicative of a larger trend: to create immersive, social media-friendly art installations that promise an “experience” rather than, say, a leisurely visit to an art museum. Another iconic artist, Frida Kahlo, has also been the subject of immersive exhibitions. Unlike van Gogh, whose work is not licensed by any particular company or estate and is part of the public domain, Kahlo’s name is overseen by the Panama-based Frida Kahlo Corporation.

But “Banksyland,” which opens Dec. 9 in San Diego, is unlike any immersive exhibit ever staged in a number of ways. First, it is the most prominent exhibition of its type that focuses on an artist who is still a living, working artist. Second, and most worryingly, while “Banksyland” is not the first unauthorized exhibition dedicated to the artist, the organizers are doing so despite the fact that Banksy does own trademarks and copyrights to much of his work.

“As [Banksy] wanted to sue for copyright, it sounds like he would have a legitimate claim,” says Amy Adler from her home in New York City. The Emily Kempin Professor of Law at New York University School of Law is one of the leading legal scholars on copyright and trademarks in the visual arts world.

Adler maintains that it’s important to distinguish the differences between copyright, trademark and fair use when it comes to an exhibit like “Banksyland.” Although all three fall under the legal umbrella regarding intellectual property, it is the concept of fair use, as Adler explains, that may be most relevant when it comes to a legal defense of an exhibit like “Banksyland.”

“Fair use is just a defense where the main idea is that: ‘I had a new meaning, message or purpose in the way I used your work and I did not use it to compete in the market, ‘ ” explains Adler.

Branding can also be relevant in the conversation about immersive exhibitions, as it deals with a company’s brand or, in this case, the brand of an artist.

“Trademarks really exist to protect the consumer from confusion about the source and copyright extends to any work that meets the definition created by the author,” says Adler. “Ultimately, it exists for the benefit of the public, to stimulate creativity.”

Copyright is often more relevant in the visual arts world because it is used to protect the people who create any kind of intellectual work – like visual art, a book, and even things like software coding.

“Copyright doesn’t make sense when applied to the art market because the way you make money in the art market is almost always by selling an authentic, original piece. There is very little value in copies,” Adler continues. This is the core thesis of her 2018 legal article, “Why Art Doesn’t Need a Copyright.”

“My contention is ultimately that there is this norm of authenticity in the art market that does all the work,” Adler continues. “It creates the value and sorts the worthless copies from the valuable originals, and that it makes copyright law’s assumptions about how that market works wrong and irrelevant.”

However, Adler admits that this is a difficult argument to make when it comes to an artist like Banksy.

“The problem with my theory as it applies to Banksy may be that the Banksy market just doesn’t function like fine art markets,” says Adler. “There may be a lot of value in reproductions and posters. I wouldn’t be surprised by that, and I don’t know how much of it goes to Banksy, as opposed to people taking advantage of the fact that Banksy is invisible.”

While art purists may be tempted to reject the use of an artist’s work, or even versions of that work, without the artist’s permission or trying to compensate them, there is a level of irony in the case of Banksy for a few reasons.

First, the artist himself has bluntly claimed in the past that “copyright is for losers.” But the artist has filed a number of trademark lawsuits and lawsuits over the years, most recently with a company, Full Color Black, that used his graffiti murals on greeting cards.

Second, in the case of an artist like Banksy, who presents himself as something of an anti-establishment provocateur, there is something to lose by fighting back against those who simply want to show his work, even if it seems solely for profit ?

To ask it another way, Banksy has cultivated an anarchic brand in which the rules don’t apply to him, and yet he still believes there should still be rules and laws protecting that brand?

Reviews and previews for “Banksyland” were mixed. An Austin critic for Sightlines, however, panned the exhibit, saying that it “capitalizes on Banksy’s anti-capitalist message.” Tickets for the exhibition’s Chicago stop cost as much as $50, with one local critic calling it “tone-deaf” and “an exercise in the kind of opportunistic capitalism and vague culture that Banksy’s graffiti might indicate.” A Portland publicationhowever, described it as more of a “tribute” to the artist and that the exhibition was “a really cool way to spend an afternoon.”

A case can be made for the value of these types of unauthorized displays. Yes, there may be naysayers who see the exhibition as problematic and their logic is sound. But given that tickets to the San Diego run of “Banksyland” are nearly sold out, it’s safe to assume that most people just want to see some cool art (even if it’s not real), more learn about an artist they admire and get a cool selfie for Instagram or the like.

Yes, there is a fine line between exploitation and celebration, but those who love the work of Frida Kahlo, Vincent van Gogh and Banksy can’t just go out to a museum to see all their work together in one place. And in the case of the latter, it’s not even something he’d likely be interested in offering. So, while the organizers of these types of exhibitions make hundreds of thousands of dollars from these exhibitions, it is not unreasonable to conclude that presenting the works as a whole is something of a public service, however morally dishonest.

Ithra’s show brings football and art together in NFT exhibition