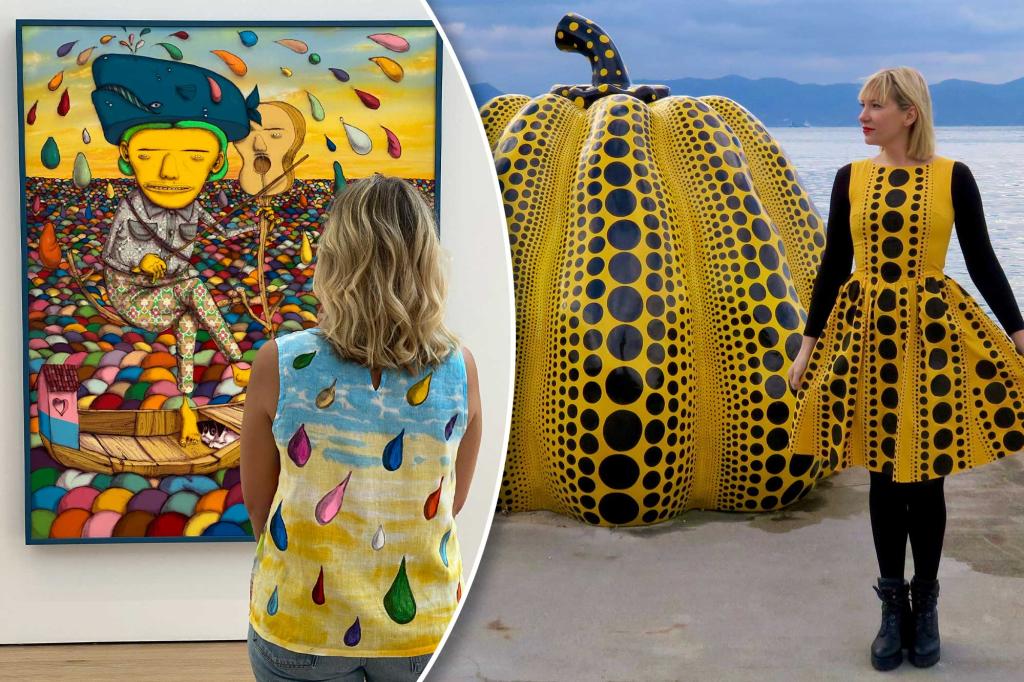 Imitation may be the sincerest form of flattery, but it can also be a bleeding edge.

Adkins, who also works at Twitter, painstakingly hand-paints the dresses, skirts and jumpsuits from her Brooklyn apartment.

“I’ve always loved clothes and consistently spent a lot of time putting my outfits together, so it felt natural to say, ‘Well, I love art and I love clothes, so why not the two don’t combine?'” the 36-year-old said. -old, who graduated from William & Mary with a BFA in art history and art.

She combined her two loves by starting with an old white dress and an image of one of Jackson Pollock’s large-scale splash paintings.

“He laid canvas on the ground and splashed paint on it. I thought it was something I could do, so I tried it,” Adkins said. “The dress came out great! After that, the floodgates just opened and I couldn’t stop.”

It was in 2010, when she launched Artfully Awear, a sustainable clothing line featuring art-inspired one-of-a-kind pieces. Since then, she has hand-painted hundreds of garments, mostly for herself and friends, and sometimes in collaboration with artists.

“I also do commissions,” she said. “Usually the client chooses a work of art that is meaningful to them. Sometimes we talk about it together, which would be inspiring for them, and sometimes they already have an idea of ​​what they want.”

One of Adkins’ most beloved artist-inspired creations is a skirt she created at the request of the Guggenheim Museum in 2019. The art institution presented a museum-wide takeover featuring the works of Swedish artist Hilma af Klint, known for her colorful abstract paintings. Adkins spent weeks creating the piece, an orange number with Klint-esque shapes, and paired it with a white turtleneck and boots for a photo shoot at the museum before the exhibit opened to the public.

“Hilma af Klint was connected to spirituality. I did a lot of research and found a skirt that she would probably have worn in her lifetime, and I painted it inspired by one of her pieces that was hanging in the exhibition.” Adkins said, “It was surreal to be surrounded by her art when no one else was around.”

Both she and the Guggenheim posted the photos from the shoot on their respective social channels. It introduced many art fanatics to Adkins’ work, who now has more than 26,000 followers on Instagram.

“I don’t know what my job would be like without social media. My community online is such a big part of what I do,” Adkins said. “It’s not just about posting a photo to get a lot of likes. It’s about sharing inspiration and hopefully inspiring others.”