Art Acevedo takes over as chief of the Aurora Police Department 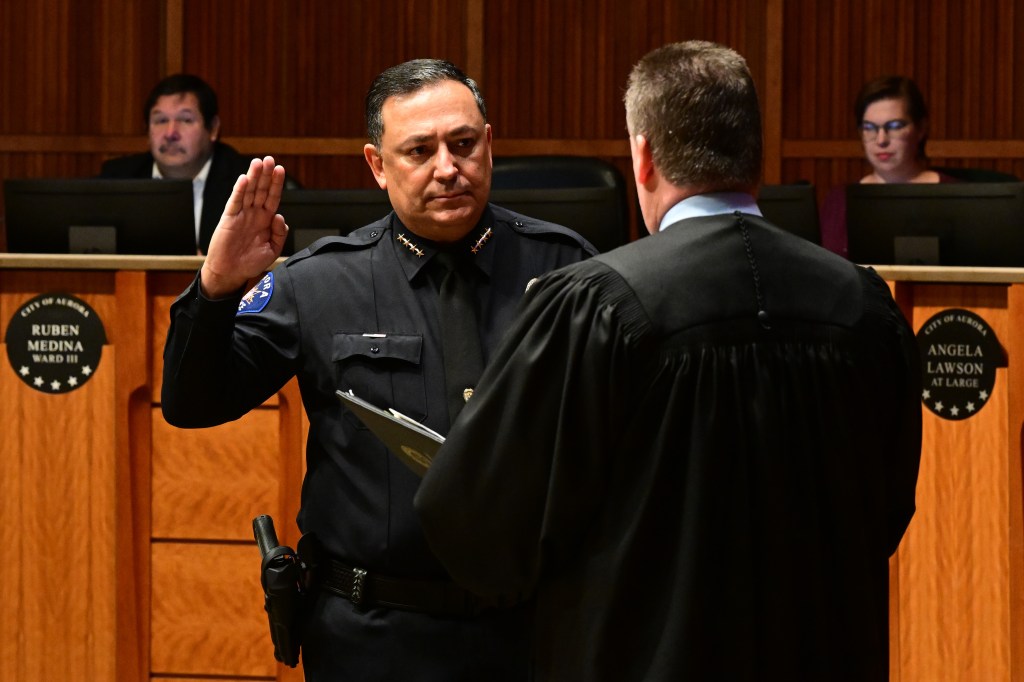 Aurora’s new interim police chief, Art Acevedo, was about to speak to the District 2 night shift officers during their roll call on his first day on the job when his phone lit up.

It was Shaquille O’Neal trying to Facetime him. They are friends from Acevedo’s time in Los Angeles.

“I was actually blushing,” Acevedo said. “I told them it wasn’t a setup.”

The Aurora Police Department’s new interim chief comes with a national profile, famous friends, cable television news appearances and more than a decade of experience as a leader of major departments in Houston and Miami. Acevedo is known for being outspoken and not shy of the spotlight. He has been called the “Tom Brady of police chiefs”, “the chameleon of police chiefs” and “the best politician in the state of Texas”.

“I’ll always say what’s on my mind,” Acevedo said. “You will never have to try to guess what I think about an issue.”

In previous cities, Acevedo has the National Rifle Association, judges, U.S. Sen. Ted Cruz and political candidates. He was fired after six months as Miami’s police chief due to conflict between him and city leadership, which he is now suing.

Acevedo is the third person to lead the Aurora Police Department in three years. He is tasked with tackling a department struggling with rising crime, trying to implement a consent decree, dealing with the fallout from the controversial firing of the last permanent chief, and trying to rebuild community trust after a series of high-profile misconduct cases.

Acevedo said he is ready for the challenge. He plans to be in the community and in a police cruiser to build relationships. He is leading from the beginning, he said.

The Aurora Police Department is significantly smaller than the two most recent departments he led. The agency is authorized to have up to 744 officers — but was down about 50 earlier this month — while Miami employed about 1,100 officers and Houston employs more than 5,000. The Houston Police Department’s $989 million budget is slightly less than the $1.1 billion budget for the entire city of Aurora.

Several Aurora city leaders are excited to have an outsider leading the department. Some have expressed interest in Acevedo staying on permanently.

“When I first heard he was going to be interim chief, I was amazed because I knew of him as a very high-level police chief,” said council member Dustin Zvonek.

Acevedo spent his first week as chief shaking hands and meeting the officers he now leads. He worked from 6am to midnight his first day on the job.

He got into trouble with the staff tasked with showing him around because he was always late.

“I have a hard time passing someone without saying hello,” he said.

His first priority as interim chief is to take an “operational pause” to create a list of every project underway in the department, figure out where each one stands and create a tracking process.

“So much has been thrown at this organization at once … we’re an organization that’s talent-rich but resource-challenged in terms of people — and that’s our No. 1 asset,” he said. “We’re going to get organized and then we’re going to move forward.”

According to his contract, Acevedo will be paid $249,990 a year for his work along with a housing allowance. The contract does not state an end date.

He wants to hear from police personnel about what changes are needed in the agency. He also hopes to do better education about the attorney general’s consent decree requiring changes in the department. Many officers don’t seem to understand what the consent decree is and that it presents an opportunity, he said.

“I want our officers to understand that this is a tremendous opportunity,” he said. “By entering into this agreement, this is the city saying, ‘We can do certain things better.’ Now this will force the city to put their money where their mouth is.”

Acevedo, an immigrant from Cuba, began his law enforcement career in 1986 as a patrol officer in Los Angeles with the California Highway Patrol.

He rose through the ranks in the agency and was considered a candidate to become the commissioner until he was caught up in scandal when a woman with whom he allegedly had an affair sued him for what he believed showed her nude photos to other officers. Acevedo denied the allegations and successfully sued the Highway Patrol alleging retaliation.

In 2007 he became chief of police in Austin, Texas and in 2016 he became top cop in Houston. As chief in Houston, he dealt with rising crime and controversy from a botched drug bust in 2019 that left two innocent homeowners dead.

Acevedo gained national attention when a video went viral of him speaking at a protest following the killing of George Floyd. After the protests, Houston’s mayor formed a task force to study policing in the city and propose changes.

Larry Payne, chairman of the mayor’s task force on policing reform, said Acevedo gave the task force any information it needed and supported the effort. Acevedo was a warm and outgoing principal with a clear vision of what he wanted to accomplish, Payne said.

“He’s always looking at things from all angles,” Payne said. “I found him to be very direct and honest in our conversations. He would say something and I would challenge him, and he would push back. But we could always reach a compromise.”

The task force released its findings in September 2020, although some activists questioned why Acevedo did not enact reforms sooner.

Acevedo left Houston to become chief of the Miami Police Department in April 2021. He held that position for six months before being fired by city management in October 2021.

In a letter, the city manager said Acevedo lost the trust of department officers, failed to log vacation time, failed to immediately report damage to his vehicle and used foul language while arguing with a protester, among other things. In January, Acevedo sued the city in federal court, claiming he was fired for speaking out about corruption.

Acevedo became a CNN commentator in December 2021, but gave up the contract when he took his position in Aurora.

The Aurora Police Department came on Acevedo’s radar when he was president of the Major Cities Chiefs Association. He said he was impressed by a presentation given by then-Aurora Police Chief Dan Oates about the department’s response to the 2012 theater shooting.

“It showed a department that was quick on its feet and that was not risk-averse – we don’t want to be reckless, we want to be risk-appropriate,” he said.

Other cities larger than Aurora have called Acevedo to see if he would be interested in leading their department, he said. But he was impressed by Aurora city leadership’s commitment to the department.

Mostly he just wanted to be a cop again.

“If it’s successful, it’s a win-win for both sides,” Councilman Curtis Gardner said.

The city has struggled to recruit and hire a permanent chief to succeed Vanessa Wilson, who was fired in April. City management resumed the search in October after two of the three finalists withdrew their applications and the remaining candidate did not have the support of the City Council to be confirmed for the position.

Acevedo’s fluency in Spanish will help him reach the city’s largest immigrant community, Councilman Juan Marcano said. Acevedo also understood that the police were a reactionary force and had only limited ability to prevent crime, Marcano said.

One of the challenges Acevedo will face will be navigating a divided department and a divided City Council, Marcano said.

All board members who spoke to The Denver Post said having an outsider come in to lead the department — even in the short term — is a good choice.

“I feel we are heading in the right direction. I feel like we’re ready for a fresh start,” said Councilwoman Danielle Jurinsky.

“It will be refreshing,” Zvonek said.

The Story Of Lionel Messi And A ‘Lucky’ Red Ribbon