Artist Aïda Muluneh: ‘We were at the mercy of foreign photographers’ 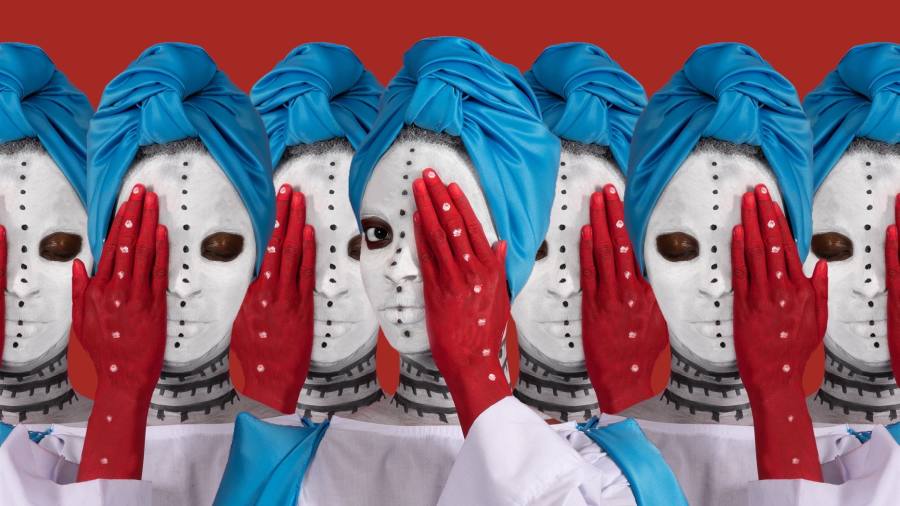 On the streets of Addis Ababa in Ethiopia, Aïda Muluneh’s photographs are popular among local businesses: printed from the Internet and placed in windows as temporary advertisements for everything from hair salons to tour operators. “I think it’s hilarious — they could have picked a photo of Beyoncé, but they chose to take my weird work because they saw something in it,” says the Ethiopian-born artist and entrepreneur, who is on Zoom from Abidjan, Ivory Coast, speak up. “I usually call them and tell them not to do it again – but that’s when you know you’ve reached people, when you’ve made an impact as an artist – when the work goes to every corner.”

It’s easy to see the street appeal of Muluneh’s art. The stark geometries of her choreographed scenes of female figures whose skin is painted in block colors are indebted to the bold graphic style of 20th century West African studio photography, but with a surrealist twist. They also incorporate Ethiopian symbols, ancient African traditions such as body painting, landscapes and personal stories from her own family.

In her latest solo exhibition at Efie Gallery in Dubai, The art of advocacy, there are striking images from her 2018 commission for NGO WaterAid, shot on the salt flats of Dallol in Ethiopia, famous for its hydrothermal springs; the barren background contrasts with majestic female figures inspired by women Muluneh saw carrying water.

Other works in Muluneh’s signature shades of canary yellow, pillar box red and electric blue reflect concerns about conflict, disease and famine, but in a totally different language to the images of Africa – depictions of starving bodies and land destroyed by violence and nature – she was exposed to growing up abroad. “We were at the mercy of foreign photographers,” she says.

Muluneh and her mother left Ethiopia in 1979 for Yemen, then Cyprus and finally Canada in search of “a better place to live.” I understood the power of the image very well – but the image that the system pushed out there did not correspond to the version of Ethiopia that I knew. Many of us [Africans] felt a sense of urgency – not just to show the peach side of Africa, but to create balance.”

The art of advocacy explores how Muluneh, 48, uses photography to raise awareness about issues that affect many African people today – from drought to tropical diseases – but with dignity and imagination. “Photography, regardless of where you come from or your economic status, is an integral part of our society,” she says. “The image is the strongest thing, it’s not politicians talking to people.”

Her early forays into photography were first encouraged by her grandfather, who was in Ethiopian Emperor Haile Selassie’s air force, as well as a painter and poet. After graduating from Howard University in Washington, DC in 2000, Muluneh worked as a photojournalist at the Washington Post, but ended up feeling restricted. “I believe in photojournalism, and I’m still learning it — but it got to a point where it wasn’t enough for what I wanted to say.” She quit her job and returned to Addis Ababa in 2007. “I felt passionate about reshaping how the world sees us, and more importantly, how we see ourselves. We don’t just sit here and wait for people to save us.”

Creating her own work is only part of Muluneh’s project. She has played an important role in the local photo festival and biennale scene, which includes Bamako Encounters in Mali and Lagos Photo in Nigeria; it stimulated the continent’s art scene, in the absence of institutions and government support. Muluneh was the founder of East Africa’s first international photography event, Addis Foto Fest (AFF), which was launched in 2010. She says she has seen an increase in the number of African photographers since the first edition of AFF, that only five from the continent out of 34 participants; in the 2018 edition there were 36 out of 152. The festival will return in 2024.

Muluneh attributes the increase in interest in photography she has seen on the continent to social media, which has given a new generation “access to an international community to be able to discover things without the gatekeepers keeping them locked up”. Her response was to create an AFF spin-off, Africa Foto Fair, which launched in December 2022 in Abidjan, where she moved in 2019. This is the first international event dedicated to photography in the Ivory Coast, she says, and the first fair to expand to a second African country.

The participating international photographers showcase various approaches to photography, but with a focus on those who visualize social justice, from award-winning Ethiopian documentary photographer Mulugeta Ayene to conceptual photographic artist Meseret Argaw to Pablo Albarenga, known for his work on indigenous land rights in Latin. America.

As part of the business model of the exchange, Muluneh also opened a high-quality printing facility – the first of its kind in Côte d’Ivoire. All editions sold at the fair will be printed at the Africa Print House, Abidjan, and her ambition is that all the printing for African photographers will one day be done on the continent.

In July 2023, Tate Modern will stage its largest ever survey photography exhibition of the African continent, A world in common. Muluneh is among the artists included. “These collective shows at international institutions are important, but it’s even more interesting to be included in shows that have nothing to do with race, nationality or ethnicity – when we don’t just have to show where we come from.”

Capturing the rallying spirit of her work, Muluneh will unveil an installation with Public Art Fund in March, taking over 330 bus shelters in New York, Boston and Abidjan simultaneously with a series of 12 new images inspired by Ethiopian writer Tsegaye Gabre -Medhin’s poem “This is where I am”, which paints a bloody yet hopeful picture of Ethiopia in the first months of the civil war that began in 1974 – the year Muluneh was born.

“You have to confront people with the work — what’s the point of art if you’re not able to go outside the comfort zone of your own community or environment? I think that’s the power of photography.”

‘The Art of Advocacy’, until 23 February, efiegallery.com