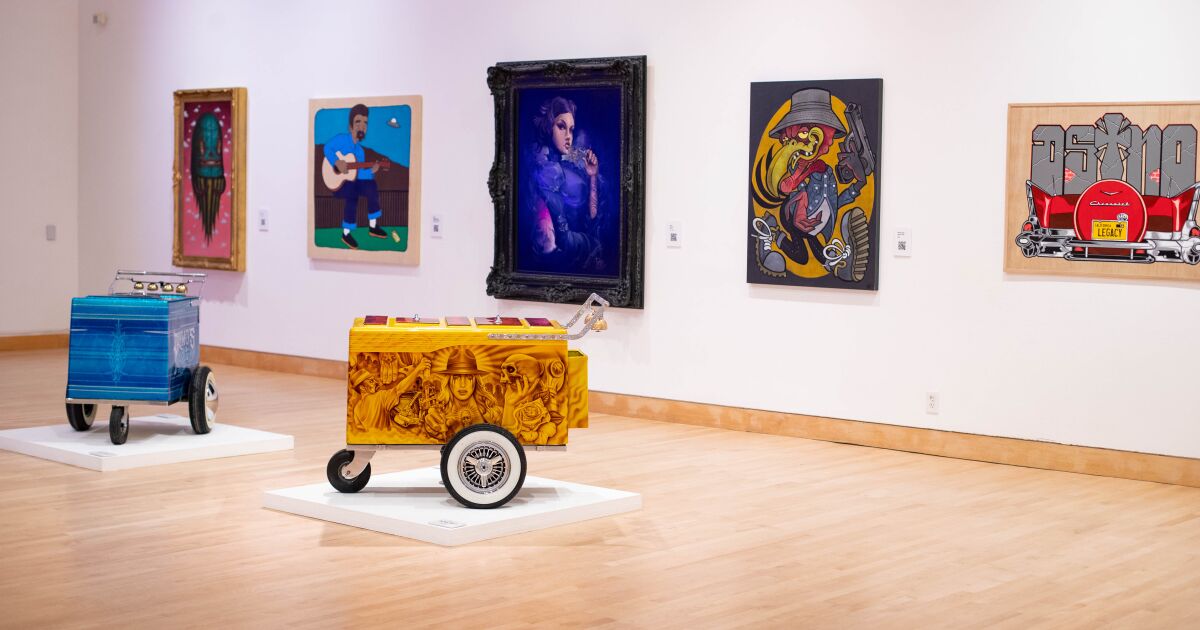 Good morning, and welcome to the UT Art & Culture Newsletter.

I am David L. Coddon, and here’s your guide to everything essential in San Diego’s arts and culture this week.

If you missed “Street Legacy: SoCal Style Masters” this past summer at the California Center for the Arts, Escondido, no worries. That unforgettable display of Chicano culture street art, graffiti, lowriders and more is documented in “The Street’s Legacy,” A YouTube film by Point Loma Nazarene University alumnus Hunter Scheidt.

What was intended to be a three- to five-minute video replay of the event turned into Scheidt’s 20-minute documentary. It includes not only works displayed in the exhibition, but behind-the-scenes footage in the gallery, interviews with some of the street artists represented, and insights from the show’s two curators, Bobby Ruiz, a local legend in this cultural arts scene, and G. James Daichendt, vice provost for undergraduate studies at PLNU.

The making of “The Street’s Legacy” required, says Scheidt, about 40 hours of filming and planning in collaboration with Ruiz, Daichendt and the CCA art gallery.

For Scheidt, who makes films and videos for architectural firms, the street art exhibition doc became a passion project.

“Having spent the last few years filming architecture for work,” he said, “I’ve learned how important it is to get the ‘why’. People like insight into why artists do what they do.

“I hope people (who watch the film) have the same experience I have with the culture. It’s a deep-rooted family that will do anything to help each other.”

The atmosphere of the CCA show was inspiring for Scheidt.

“Many shows or exhibitions are for the privileged with a set of guidelines: Don’t spill your drink. Don’t talk too loud. Do not touch the art. Don’t bring the kids. ‘Street Legacy’ was a show where they said to bring anyone and everyone and let them see our culture.

See it again in Scheidt’s “The Street’s Legacy,” then seek it out throughout San Diego County, where Chicano art and culture thrive.

If you missed as I saw “A Charlie Brown Christmas” this holiday season, join the club. There has not been a network TV broadcast of the classic “Peanuts” because its broadcast rights belong to Apple TV+.

But through Christmas Day, Apple TV+ is offering free access to non-subscribers to stream “A Charlie Brown Christmas.” Will you be encouraged to subscribe? Natural. ‘Tis the season for fields, Charlie Brown. Yet the enduring charm of this 1965 animated film, including the wonderful jazz score by Vince Guaraldi, trumps any cynicism.

Maybe I’m just a shameless Royals Watcher, but I couldn’t resist Netflix’s “Harry and Meghan,” the six-part documentary series about the controversial Duke and Duchess of Sussex.

Granted, there aren’t as many startling revelations about the couple and their broken relationship with “The Institution”, as Harry calls the palace hierarchy, and there is a certain amount of victimhood assumed by the pair. To me, though, Prince Harry and Meghan Markle come across as real people, the kind you can invite over for drinks or dinner and have genuine conversations with.

However, the abuse Meghan has been subjected to by the British tabloid press should not be underestimated. It was relentless and sometimes shocking. We hope that Harry, Meghan and their children have, as the Brits say, a “Merry Christmas” and a peaceful one.

U2 fans will call me a Grinch for saying this, but I’ve always found the Irish band to be tough and often preachy. That doesn’t mean Bono, Adam Clayton, The Edge and Larry Mullen Jr. is not talented. It also does not mean that they do not have a merit Kennedy Center Honors.

The longtime Dublin band is among those who earlier this month received the John F. Kennedy Center for the Performing Arts’ Artistic Achievement Honors in an event held at the Kennedy Center Opera House in Washington, DC (The others: Gladys Knight , Amy Grant, Cuban-born composer/conductor Tania Leon and actor George Clooney.) The 45th Kennedy Center Honors program airs Wednesday night at 8 on CBS (KFMB-TV).

The creative and artistic staff at the Museum of Contemporary Art San Diego have the opportunity to share with the public the works of art they have produced themselves.

The MCASD Staff Exhibition is a community exhibition of works by museum employees now on view in the Axline Court in La Jolla. This show runs until January 8th.

While you’re there, check out the exhibit “Alexis Smith: The American Way,” which will close on January 29.

READ MORE: Alexis Smith and how she ‘represents the power and potential of self-actualization inherent in the American way’

In the past year, San Diego theaters fully reopened, though it’s been a rocky recovery, with the closing of the 46-year-old San Diego Repertory Theatre, a handful of unexpected show cancellations and COVID outbreaks that have scuttled weeks of shows across the country. Many theaters offered feel-good comedies and musicals to lift the spirits of pandemic-weary residents. But the shows that resonated most with me most directly dealt with pressing national issues: a disturbing rise in anti-Semitism, a rise in hate speech on Twitter, and mass murders of Black and LGBTQ Americans.

Jeremy McQueen, the man behind the dance collective Black Iris Project, wanted to bring his work back to his hometown, but it wasn’t easy.

READ MORE: A San Diego-bred choreographer just wants to come home. It shouldn’t be that hard.

“Classic Holiday Movies”: Enjoy a trio of holiday classics this Saturday on UCSD-TV featuring guardian angels in many forms – from squirrels, to ghosts, to friendly (and sometimes not-so-friendly) spirits. The evening begins with Jimmy Durante and a squirrel named Rupert saving the day in “A Christmas Wish.” Next, three benevolent ghosts help a young couple find lasting love in “Beyond Christmas.” And finally, no holiday movie marathon would be complete without Dickens’ classic tale of everyone’s beloved curmudgeon, “Scrooge.” To watch UCSD-TV classic movies, tune into your local cable station every Saturday from 4:00 PM to midnight and check our website for movie times at ucsd.tv/movies.

“Informed Consent, Genomics Data and Health”: New technologies, shifting demographics and changing societal expectations point to the need for people from all walks of life to be part of fact-based discussions about the checks and balances in place when it comes to human research. Anthony Magit, MD, MPH, shares the importance of institutional review boards (IRBs), oversight and consent when conducting research with human subjects. He is joined by Pratheesh Sathyan, Ph.D., and George Hightower, MD, for a wide-ranging discussion of clinical trials, HIPAA, research design, consumer genetic testing and more.

Here are some of the best things to do in San Diego County this weekend, including theater, concerts, holiday events, “The Nutcracker” and more.

Coddon is a freelance writer.