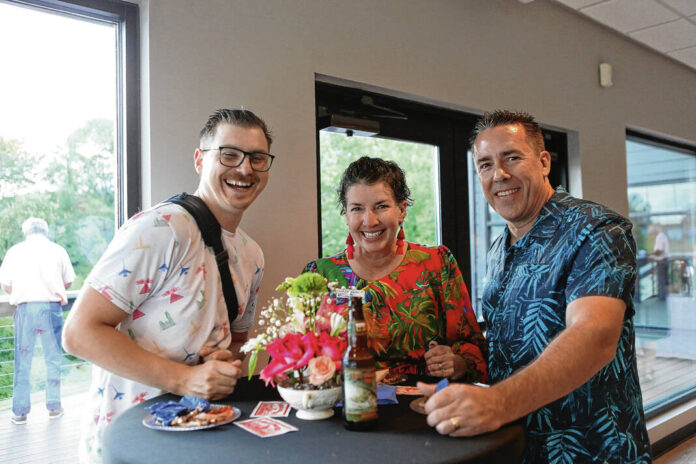 The theme of “Future Focus” was so sharp at Saturday’s annual Uncommon Cause arts fundraiser that a record gross total of $227,300 will also advance the present time for the nonprofit Columbus Area Arts Council.

Brooke Hawkins, the arts council’s interim executive director, said she was impressed with the community-wide support among a crowd of 250 people at Harrison Lake Country Club.

“The space was full and alive,” Hawkins said.

The event featured food from chefs Dan and Amber Gruden, live music from local pop-rock cover band Flat Earth, an art shop featuring unique creations from local artists and designers and a live auction. The top-earning auction item was a private fresh seafood and wine dinner for 10 with local chef Gethin Thomas and a boat ride on Grandview Lake. It went for $12,500.

The previous record gross total was set at $215 in 2019, according to records. Hawkins said she is unsure whether the current figure will translate to a net record after expenses are paid, as some costs have risen significantly amid the pandemic.

“We’re still in the midst of COVID-19, and we’re in the midst of a transition in leadership,” Hawkins said. “So, against all odds, the community really came together and rallied around the arts. And we are really grateful for that.

“I think it’s a good reflection of the work that the organization has done in the past and continues to do – and that people believe in the work and think it’s important.”

Part of the evening’s theme was built around building support for the current and future maintenance of the area’s public art, including pieces such as the Eos sculpture at the Mill Race Park entrance and the Henry Moore Large Arch work on the Bartholomew County Public Library Plaza.

“It was a big hit,” Hawkins said, adding that several items sold out. “People loved it – partly because it was something different.”

That “Fund a Need” segment of the event raised $68,000, which is considered a significant amount. Hawkins said a mix of agencies, including Landmark Columbus Foundation and the Columbus Indiana Architectural Archives, will work out details on cataloging all the public art and working out maintenance details that will be tracked over the years.

The store included everything from custom carry-all bags created by Alfonso Wadholm to Vans shoes featuring the Sixth Street Arts Alley design. Daniel Martinez and Lulu Loquidis created the shoes. Items not yet sold are available for purchase at the Columbus Area Visitor Center.

“We ordered a ton of extra stock,” Hawkins said. “So now it’s a cool, added bonus that all these local artists will have their work in the visitor center.”

Local artist and designer unique gifts are available at the Columbus Area Visitor Center at 506 Fifth St in downtown Columbus from the overflow inventory of the Uncommon Cause pop-up shop.