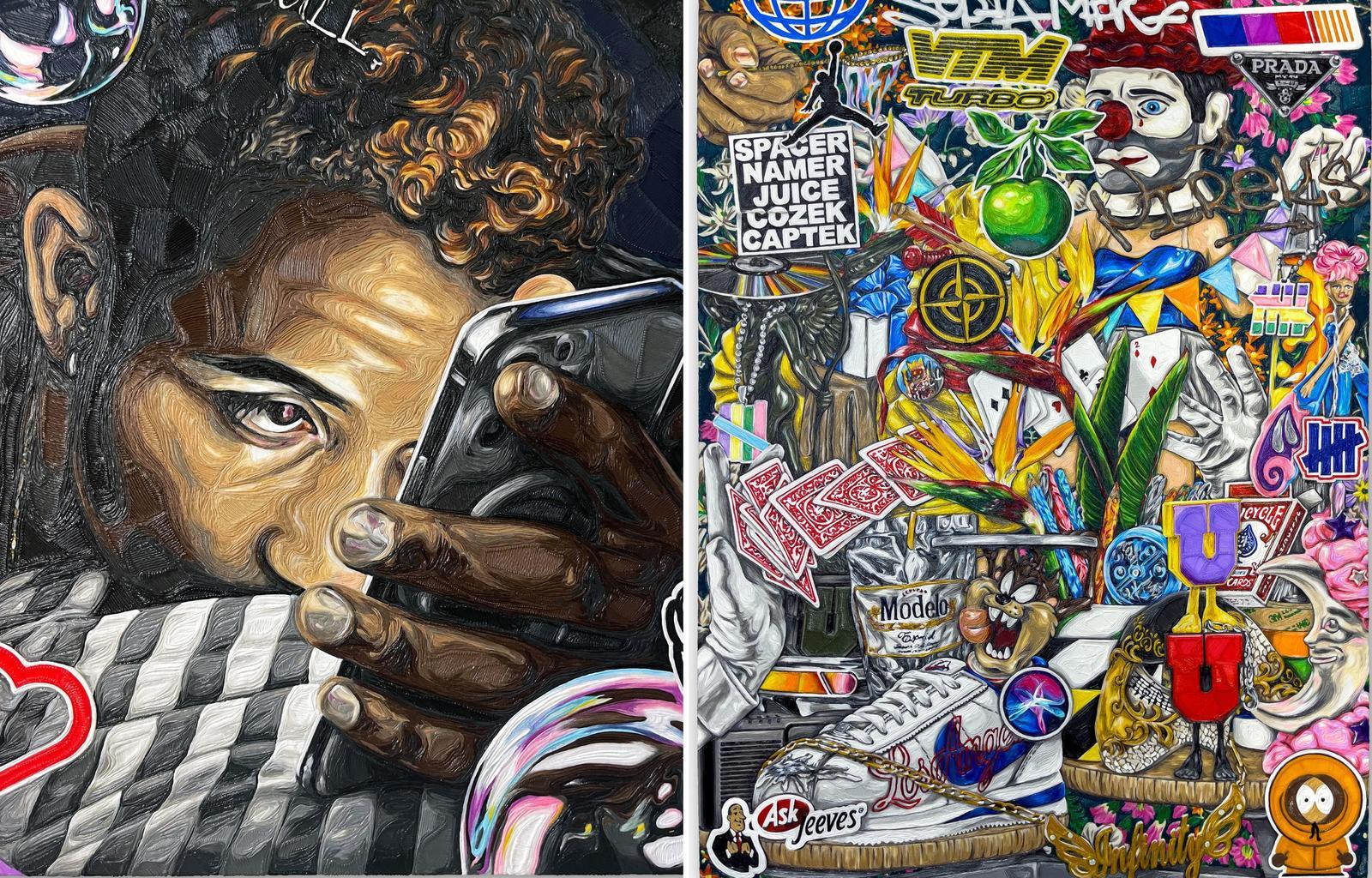 It’s also the modus operandi of White’s Energizer Bunny, the drumming, flip-flopping marketing mascot of those eponymous batteries, depicted at SAM in a painting that hung higher than the others, near the ceiling. The checkered background seems to fold in on itself and the surface of the painting bears the characteristic cracks of a phone screen that has hit the ground one too many times.

White says the bunny functions a bit like a messiah here (his family always hung a picture of Jesus up high). But the drum that beats the rabbit is not a message of sacrifice, but the gospel of capitalism, the eternal cult of “carry on”. “Unhealthy and harmful at its core — that’s what most of my work explores,” White said via email earlier this week.

The cotton candy pink bunny isn’t the only icon of capitalism, popular culture and (somewhat dated) technology to make an appearance in the show. Orange-coated Kenny van South Park staring at us from the corner of one painting, rubbing shoulders with Prada and Air Jordan logos, plus shiny CDs and gloves shuffling a deck of playing cards. (That’s just one painting.) The glowing orb of the Apple Siri icon near the bottom reinforces the feeling that we’re looking at a phone screen, a rabbit hole to who knows where.

Like the magic of a phone screen, this exciting world—a dizzying vortex of memes, images, “content” and purchases at our fingertips—exerts a thrilling pull. Standing in front of the paintings, you may find yourself wanting to decode each element like a digital-age archaeologist. That’s part of the point: Just as in Dutch Vanitas paintings (an inspiration for White), each symbol, and the interplay between them, tells a story of “time, place, journey, relationships, experience, status, wealth , society.” White said. And like Vanitas paintings, many of those stories are rooted in extractive capitalism and consumerism.

In one particularly poignant painting, White paints himself in a pose that will be familiar to those who bring their phones to bed: chin sunk into the pillow, phone in hand, face illuminated by the screen, eyes disturbingly vacant, hypnotized. The painting is a close-up, but White looks far away as he keeps scrolling, and going, and going, and going—but where?