US studio Ahmadreza Schricker Architecture North has installed a series of unique concrete roofs in Tehran’s 1920s brewery to create a contemporary museum.

Located in the city’s downtown area, the 1,700-square-meter Argo Factory is the first private museum founded in the capital of Iran since 1979.

The distillery once used to produce the beer named Argo was chosen as its central location with the aim of attracting more cultural activity into the space.

“It was very interesting to us to transform the modest industrial beer factory, which was built about 100 years ago and is part of the city’s industrial heritage, into the International Museum of Contemporary Art in the 21st century,” said the studio. I looked back.

“It has spurred the revitalization of downtown Tehran and has been cited as a catalyst for the renovation of nearby structures, and as a result of the revival of this historicly important central zone, most galleries have begun to return to the downtown area. increase.”

Fully known as the Argo Factory Museum of Contemporary Art & Cultural Center, ASA North’s goal was not just to focus on the preservation of the building, but to give it a new life. To achieve this, he undertook early conceptual work with Patrick Hobgood and his US studio, Hobgood Architects.

“Our architectural reaction to the Argo Factory was to offer a” second chance “rather than a” preservation “,” explained studio founder Ahmad Reza Schlicker.

“We gathered to consider the history of the site, the original intentions of its industrial architect, and most importantly, the exhibition space requested by the Peziman Foundation. Our goal is to consider them. Was to integrate into a locally maintained hybrid, “Schlicker told Dezeen.

Inside, the Argo Factory consists of six different galleries, in addition to a studio for the artist residency program of event spaces, libraries, offices, shops and museums.

There is also an observatory that surrounds the building’s original chimney and a bar that serves non-alcoholic draft beer in favor of the building’s previous use.

The first step in ASA North’s intervention was to support the existing building without disturbing the original brick wall. Its new foundation, made of a mixture of concrete and steel, was designed by Behrang Bani Adam to ensure that the building is earthquake resistant.

A more visible change by the studio is the addition of five concrete roofs. It replaces the original roof that was left behind from the factory.

“The structure of Argo has been abandoned for the past 57 years, during which time the roofing material was stripped and the beams were carried away by neighbors. The factory was desolate with no roof.” Schlicker explained.

These hand-cast concrete roofs feature a striped pattern designed to reflect the metal caps of nearby traditional buildings. They also appear to float on the walls of the factory.

Roof design and placement are key to maintaining the climatic conditions required in the museum’s gallery. The roof blocks heat and helps filter the light into the gallery of high ceilings below. 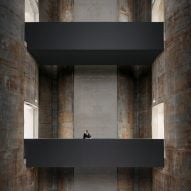 Other changes to the shell of the original building include improvements to the brick façade. It has a flemish bond pattern and is exposed in places inside.

The bricks of the original structure were recycled and reused for what the studio described as “a relentless archaeological effort,” but some had to be replaced. Another type of mortar was used to distinguish the original element from the new element.

Inside the Argo Factory is a curved concrete staircase designed without a central strut and connected to the museum lobby and the gallery above.

This staircase is one of the new elements of the curvilinearly shaped museum, as opposed to the more uniform architecture of the original industrial building.

As part of the project, ASA North also designed a layout for an exhibition named For the Sake of Calmness, along with a sister studio called ASA South.

Located in an L-shaped gallery in the basement of the Argo Factory, the show focuses on the film of the same name by Iranian photographer Newsha Tavakolian.

The ASA North design transformed a dead-end space into an “infinite symmetric space” by placing a borderless mirror at its end. This allows visitors to watch the movie directly on the screen or indirectly through mirror reflections.

Other cultural spaces in the adaptively reused building include the German MKM Cuppers Mühle Museum, built by Herzog & Domouron in a historic grain factory, and Tadao Ando on the 18th-century Stock Exchange in Paris. There is a gallery built in the building.

Unless otherwise stated, the photos are by Ahmadreza Schricker.