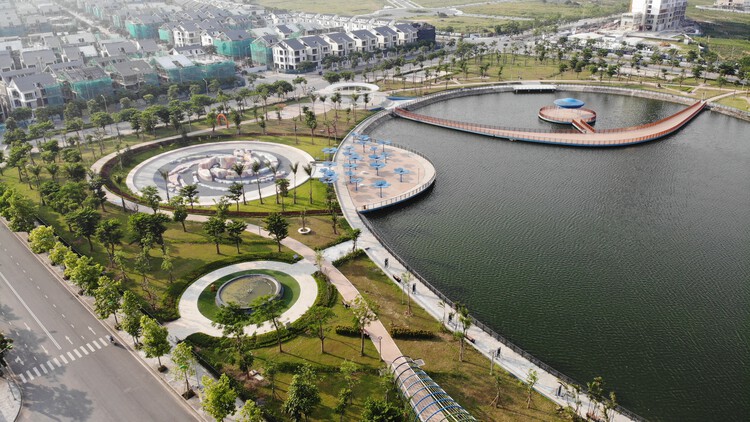 A description of the text provided by the architect. Astronomy Park is a park project in Hanoi. This project is located in a new development area in the western part of the city and is Vietnam’s first astronomical park. The construction project surrounds Lake Bach Hop Thuy, an abandoned retarding basin in downtown Duong Noi. This project will significantly improve the quality of life and public spaces in the new district of Hanoi, while at the same time boosting real estate.

The park area is 120,000m2, of which 6000m2 has the courage to see when confronting fear, a beautiful new world, evil forces of darkness, the beginning of time, the moment of creation, escaping home. The only way to know if you are or fleeing home is to embark on a journey to explore the Astronomical Park. As astronauts, we explore the new universe as we walk through astronomy and experience nine highlights of the world of astronomy through landscape architecture and the language of science and technology. Developed on the theme of astronomy, it talks about a journey to explore. The universe in the language of landscape design. Parks are places to nurture science, arouse people’s interests, discover, and study the wonders of the universe and the distant lands outside the Earth, especially the younger generation. Language is the basic geometry of circles, spheres, swirls, and the universe.

The journey to explore space in Astronomical Park is seamlessly connected by two closed routes from start to finish, with the outer route being the Milky Way. The Milky Way is a walking path in the park inspired by the winding Milky Way (also known as the Milky Way) in the sky. There are ornaments on the road that represent the constellations of the Milky Way. A variety of lighting effects and colors give the park a dramatic atmosphere at night. The park has four entrances corresponding to four squares: Big Bang Square, Zodiac Square, Solar System Square and Alien Square. The inner route is a lakeside promenade, a quieter walking route that allows pedestrians to approach the water through the piers, and the deck invades the lake. The starting point for your trip is the Big Bang Square. Inspired by the explosion of the Big Bang, the event that formed the universe today, the square is an outdoor stage (amphitheater) with the symbol of the Big Bang Tower (Big Bang Tower).

The base of the tower is small, and the higher it is, the larger the symbol of the Big Bang theory. The explosion begins at a very small point in the universe, then spreads, and constantly expands infinitely. This is the front door of the project with its iconic tower surrounded by the square of Bat Trang village, a famous local ceramic tile depicting a big bang event that hosts events such as music festivals and fairs. On your way to the moonlit bridge, you’ll pass through the garden of statues of famous scientists and astronomers such as Galileo, Stephen Hawking, and Newton, and arrive at your next destination, Zodiac Square. There is a circle representing the sky in this square. , The circle contains 12 zodiac signs of astronomy. Each star in each constellation is a fountain that creates a playground for art water during the day. And at night, the stars are the lights that create a show of light, simulating constellations and astrology.

The Milky Way Galaxy is an area that imitates the galaxy in which the universe was formed. The structure is a spiral wall system, the layout is transformed into a mysterious and magical labyrinth garden, and the meticulously decorated surface becomes various high and low walls covered with traditional ceramic tiles. increase. From there, a tunnel of time leads us to the solar system. You will pass through a portal of species representing life forms that are sprouting throughout the universe and enter the Solar System Square, the most realistic simulation of the solar system centered on the large sun that rotates around planets, including the Earth. Each planet has information signs that help children and visitors better understand the planets around the globe. Surrounded by an ascending species-like asteroid belt, the water-reaching structure serves as a marina for future water sports activities. Next to it is the Crab Nebula Restaurant, which will be built in Phase 2.

The UFO Zone is a children’s playground with a terrain structure that mimics a “space grid” with protrusions on the surface of planets such as the Moon and Mars, and depressions such as geological tectonics. Creating a sense of gravity, the game is a strange object about space and astronomy. Designed and arranged to create fun, rewarding and fun activities for children. Next to it is the ISS station, which has light meals where parents can sit and take care of their children. It is not only a regular pavilion structure, but also an integration of new technologies and materials with rooftop solar panels. Alien Square simulates the orbits of planets in the solar system.

In the center of the square is a UFO in the shape of a UFO and an alien engraving system around the square. Other interesting figurines of aliens are of great attraction to everyone, especially toddlers. Right next to it is the sportsfield and exercise equipment that will be expanded in Phase 2 of the project. The end of the trip is the black hole pit. The black hole pool is located on the surface of the lake and forms a round crater surrounded by floating floors and a marina. It is a place where you can enjoy playing in the water in the park. The black hole pool, combined with a playground, gym, exercise machine, outdoor equipment and adjacent auxiliary areas, makes it an ideal space for residents to improve their health and physical activity. It is interesting that all the trees in the park are planted side by side in the direction of the sun at an angle of 45 degrees to the master plan. The next phase, Phase 2, will build a range of items, including a museum, a lake black hole swimming pool, and a telescope system for observing the sky.

Through their lens: 15 photos captured in 2021 by Honolulu Star-Advertiser photographers