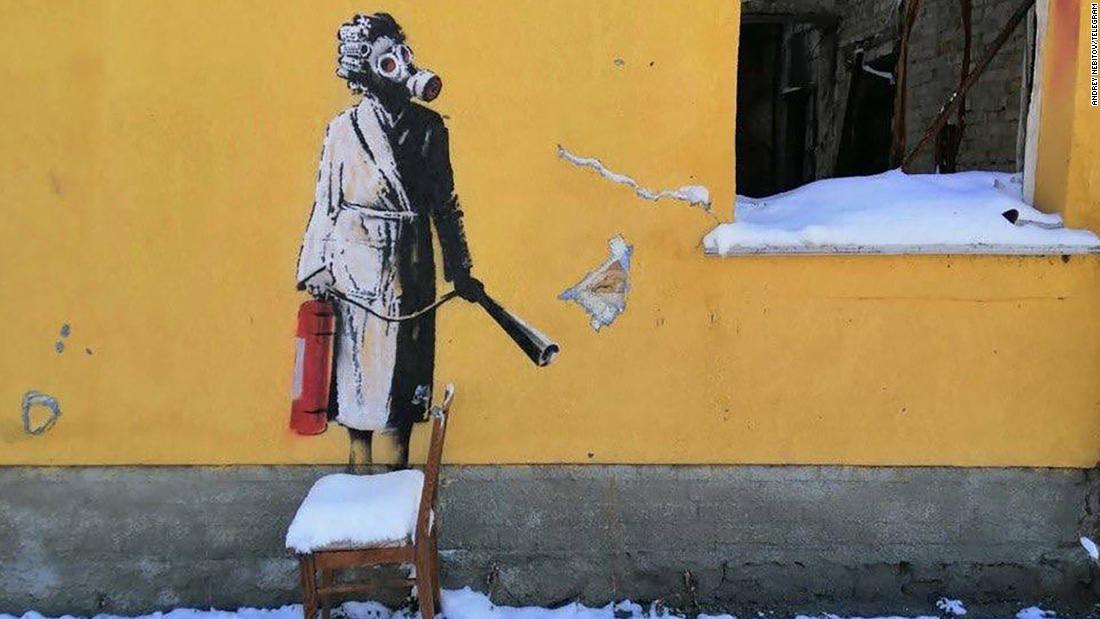 The ringleader of a group that allegedly tried to steal a Banksy mural from a wall in Ukraine could face up to 12 years in prison, the country’s interior ministry said in a statement on Monday.

The suspect, who has not been named, received a “notice of suspicion” after police detained the suspected thieves who tried to remove the artwork from a house destroyed by Russian shelling in the city of Hostomel last month .

The group successfully removed the mural from the wall before being detained. Credit: Andrey Nebitov/Telegram

The mural, which depicts a woman in a gas mask with a fire extinguisher, is one of several works completed by the British street artist in cities across Ukraine, including the capital Kyiv, following Russia’s invasion.

According to police, the group removed the mural from a wall and intended to transport it off the site on wooden planks. The suspects, who come from Kyiv and the central Ukrainian city of Cherkasy, were “detained on the spot,” the head of the Kyiv region’s military administration, Oleksii Kuleba, said at the time of their arrest in early December.

“These images are a symbol of our fight against the enemy,” Kuleba said on his Telegram channel after the arrests, adding that the mural itself was undamaged. “These are the stories about the support and solidarity of the whole civilized world with Ukraine. Let’s do everything to preserve the works of street art as a symbol of our future victory.”

Monday’s statement said the suspects were arrested “thanks to the vigilance of local residents, the police and other security forces.” The ministry also said that the subsequent investigation valued the artwork at more than 9 million hryvnias ($244,000).

In November, Banksy unveiled a mural of a female gymnast balancing on a pile of rubble on the wall of a damaged building in the liberated city of Borodianka.

The mural was taken from a building badly damaged by Russian shelling. Credit: Andrey Nebitov/Telegram

The anonymous street artist later confirmed to The Art Newspaper that he had completed a total of seven new works in Ukraine, including a mural depicting a man bathing amid the damage caused by Russian shelling in the village of Horenka.

In a video posted to Instagram, Banksy showed footage of his time in the country and concluded with a message that read: “In solidarity with the people of Ukraine.”

Los Angeles is becoming too hot to bear. Can it design its way cooler? | Los Angeles