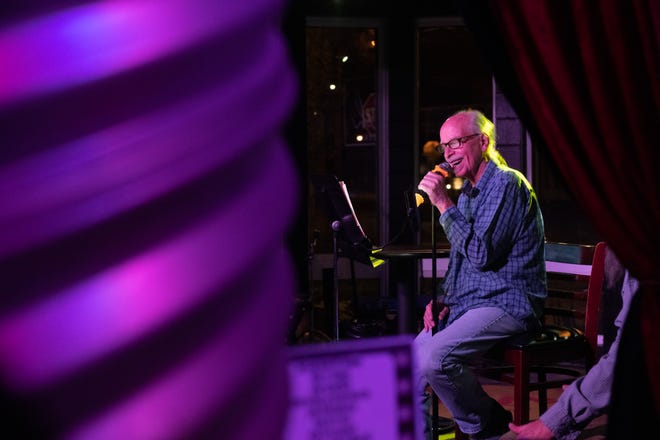 Many knew him simply as “Hoosier Bill.” Those closest to him define him by his authenticity, generosity and larger-than-life presence.

“Bill never sold out. Never even came close,” said friend and former Courier & Press photographer Bob Gwaltney. “He held on to his dream to be a poet, to be an artist. These were values ​​from which he did not change.”

However one knew him, it’s clear that Evansville’s art community may have lost its most influential force. Sovern, Indiana’s Beat Poet Laureate, suffered a severe brain injury in a car accident on July 29. After being taken off life support, he remained in hospice until his death Friday night. He was 73 years old.

“It’s going to hurt our community tremendously,” said friend Jean Kizer. “It would be extremely difficult for anyone to even try to fill his shoes. If you look at a lot of things around Haynie’s Corner and Downtown, it’s there because of him. He had a gift.”

He was the driving force behind the founding of Haynie’s Corner in the early 2000s, opened the first art gallery there and tirelessly lobbied city leaders for recognition of the area as an arts district, which eventually became a reality. But he was even more hands-on than that, Kizer said — Sovern believed that supporting the arts meant supporting the artist on a personal level.

“He always found someone a place to live, fed them, gave them a space to act,” she said. “Musicians, painters, poets… he didn’t draw any lines. If you did something creative, he was there to support you. He always saw the good in people.”

Sovern served in the US Air Force during Vietnam as an intelligence officer, interpreting aerial photographs to identify attack coordinates. He had a keen eye for detail, and when he returned to Evansville, he put his energy into getting an art degree from the University of Southern Indiana and immersed himself in the local art scene.

Aside from his poetry, he was also a documentary filmmaker, managed an art gallery, organized events, painted houses, did aerial photography and filmed the Kentucky racetrack for broadcasts, among other things.

“Evansville wasn’t really known as a super place for creative people,” Kizer said. “Bill made a space for it. He would meet all these young people and connect them. I truly believe that without him, community would not exist today as it does.”

Grace Strange stayed by Sovern’s side during his final days, remembering a promise she once made to his mother. The two met in 1992 and remained close after their romantic relationship ended. Strange joked that he was the best friend she ever had, and also the worst boyfriend she ever had.

“I don’t come too far from his bedside … I promised his mother on her deathbed that no matter what, I would always look out for him,” she said. “I am so incredibly proud to call him my friend.”

During the 1990s, Sovern and Strange held poetry readings at their Southeast Second Street apartment — Strange said she was afraid they’d be evicted one night when 105 people showed up — and co-operated a Downtown gallery called The Poet House and Art Emporium managed until 2010.

Sovern has held poetry readings at various venues around Evansville for decades, bringing in poets from across the Midwest. Most recently, his groups would meet at Bokeh Lounge on the third Tuesday of every month. A memorial lecture at Bokeh is planned for August 16.

Local life:Here’s how a Courier & Press photographer got that fantastic lightning photo

“Bill has been a wonderful mentor to dozens of young men and women,” she said. “He encourages everyone to have a voice, whether you’re a professional or just wrote it on a napkin. We used to joke that poetry was free therapy.”

In the late 90s, Sovern started a poetry performance group called Shakespeare’s Monkey, a bit of self-deprecation about the concept that enough monkeys with enough typewriters and enough time could eventually manage to turn out texts on the level of William Shakespeare. The orchestra supported poets with instrumentation and created soundscapes to complement the spoken word.

“It was a real fly-by-the-seat-of-your-pants atmosphere,” Kizer said. “It was a time when poetry as an art form was a force. People paid attention.”

Teresa Roy said she knew Sovern for about 35 years and described him as a “magnificent person.”

“I’ve heard him call us ‘Rat Flyer of Poetry’, but he was so much bigger than just that,” she said. “For me it’s all about the legacy he’s created. You always had a place with Bill.”