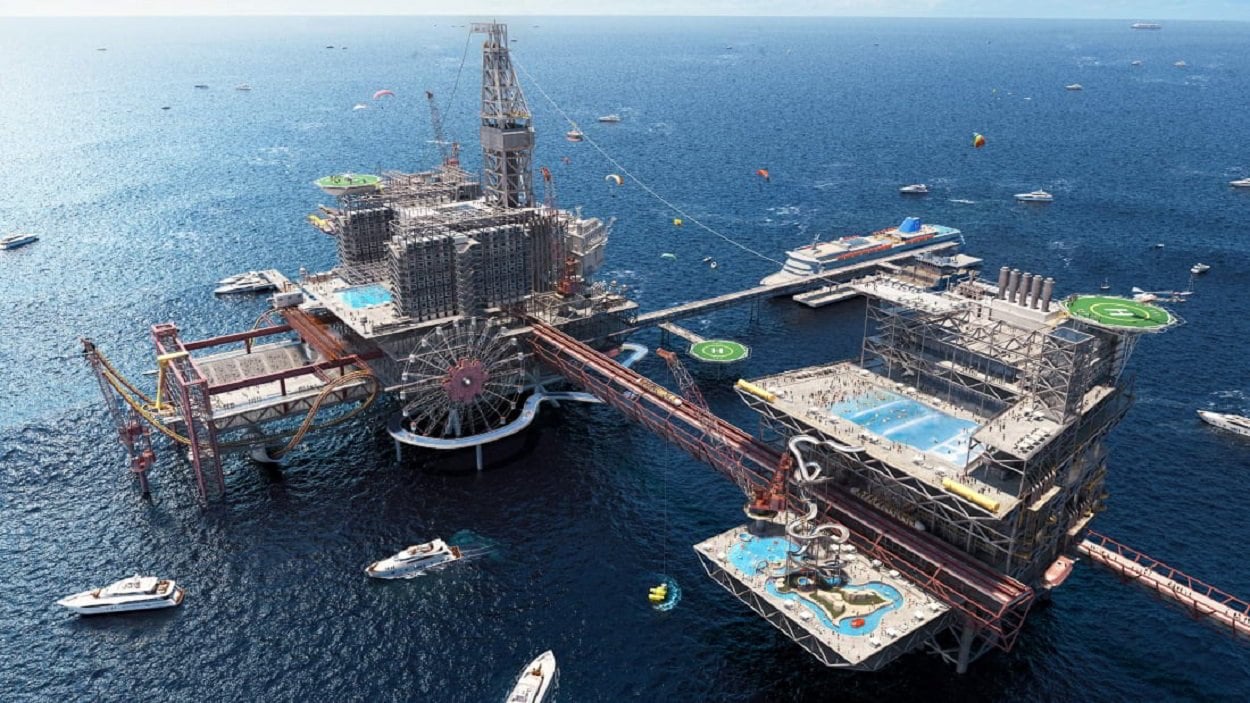 Although it is expected that a day will come when the offshore oil and gas infrastructure is retired at the end of active service life, should this be the end for these giants of the sea? This year, many eyes have been opened to the idea that these oil rigs can get a new life by being reimagined and rehabilitated into something new, like art.

At the end of its life cycle, the offshore energy infrastructure is withdrawn from use and put through a decommissioning process. This has already been done several times, but awareness of the possibility of reusing these industrial structures has been further raised by a commissioned North Sea platform, which began its transformation into a large-scale public art installation earlier this year.

This retired North Sea platform was part of a project called SEE SAMPLE, brought to life by NEWSUBSTANCE Collective. It was first announced in October 2021, when it was revealed that the town of Weston-super-Mare had been chosen as one of ten locations across the country to host this flagship, national arts and culture installation.

However, the real transformation of the 450-ton platform, which weighs the same as three blue whales or 65 African elephants, did not begin until July 2022, when it arrived at its destination to accept its new life. Transported to the Tropicana on a flatbed the size of a football field and hoisted over the seawall by crane on pre-built legs, the retired North Sea giant has been transformed into SEE MONSTER and enhanced with multiple bells and whistles including renewable energy, discussions arise about the use of such things in the future.

During the time this art installation was open to the public, visitors could “pass behind the crushing cascade of a 12 meter waterfall and under the glittering scales into the cavernous underbelly of the beast,” find “hidden routes” within the “wild garden” to discover and explore the rehabilitated structure “new approaches to a more sustainable and greener future,” as underlined by NEWSUBSTANCE.

Even though SEA MONSTER closed its doors after eight weeks of welcoming hundreds of thousands of visitors on board and returned to its decommissioning cycle, there are many such structures, either at or near the end of their service life, that could be put to use in similar projects.

“SEE MONSTER has been one of our most ambitious projects to date and what a journey it has been! A true world first in reuse and one that we hope provides a blueprint for the future,” said NEWSUBSTANCE

Offshore Energies UK (OEUK) released a report in November 2022 which outlined that decommissioning in the UK is expanding rapidly, predicting an increase in activity over the next three to four years. Based on the report, the sector is expected to continue to grow as other emerging offshore energy technologies, such as offshore wind farms, also require the service.

With more than 75 percent of total decommissioning spending estimated to be within the central North Sea – stretching from Yorkshire to the northern tip of Scotland – and the northern North Sea – covering an area north of Scotland and east of Shetland and Orkney – it certainly offers many opportunities and options for reusing this North Sea infrastructure in different ways, perhaps even more art installations similar to SEE MONSTER.

Put retired oil drillers to use

Some other countries have already come up with creative ways to use these oil rigs once they retire from active service and are no longer needed for black gold mining. One of those worthy of mention, when considering projects to reuse the old to create something new, is the Ocean Star Offshore Drilling Rig Museum and Education Center, which is dedicated to the offshore oil and gas industry. This museum is housed on a retired jack-up rig that was erected in Galveston Harbor and is located along the Strand National Historic Landmark District.

Before retirement the Ocean Star jack-up rig conducted operations in the Gulf of Mexico from 1969 to 1984 and drilled more than 200 wells during its active service life. It was bought by the Offshore Energy Center (OEC) in 1995 and opened as a museum in 1997, after renovation. It is designed to be a self-guided facility with videos, information and interactive exhibits throughout, taking most visitors about 1.5 hours to tour completely.

Another example of reusing oil rigs is Saudi Arabia’s THE RIG, which is a tourism project inspired by offshore oil rigs. It was announced by the country’s Public Investment Fund (PIF) in October 2021 and is planned to be located in the Arabian Gulf.

Spanning an area of ​​over 150,000 square meters, this “Extreme Park, a whole new playground of adventure,” as described on the project’s website, is expected to feature a number of tourist attractions, including three hotels, 11 world-class restaurants, helipads and a range of adventure activities such as extreme sports and live shows.

“Offshore platforms were created for discovery. THE RIG takes that legacy to the next level. It is the ultimate living laboratory for pioneering new thrills, extreme sports and adventure. Get on board and experience the future of adventure,” as highlighted on the official website.

There are other examples of these decommissioned rigs being given a new purpose and lease on life, such cases include movies and TV series, where these foreign structures are used to film various scenes. One such case is Amazon Prime’s new supernatural thriller, titled The Rigwhich is located on an oil rig off the Scottish coast in the North Sea.

Expected to hit the screens on January 6, 2023, this upcoming six-part thriller promises to take its viewers on a gripping adventure with a group of foreign workers working on the fictional Kinloch Bravo oil drilling in the North Sea. As their plans to return to the mainland are thwarted, the crew will be forced to confront a mysterious fog and unknown forces as “Bonds are broken, allegiances are formed and generational fault lines are exposed.”

Several movies have been made so far that make use of offshore gas or oil platforms and some of them are even based on a true story, such as Deepwater Horizon (2016). As the title suggests, it was based on the Deepwater Horizon tragedy of 2010, which killed 11 offshore workers, caused billions of dollars in damage and made lasting impacts on the environmental landscape in the Gulf of Mexico.

Some other honorable mention movie mentions include The thing below (2004); Sector 7 (2011); Norway’s Pioneer (2013); and The Rig (2010). The last one is known entirely on the oil rig as Mr. Charlie, which is recognized as the first submersible and fully transportable drilling rig in the world to drill offshore wells. It is now used as a museum and training facility in Morgan City, Louisiana, showcasing another great example of repurposing retired oil rigs.

Panoramic Vistas from Westport’s Past at library