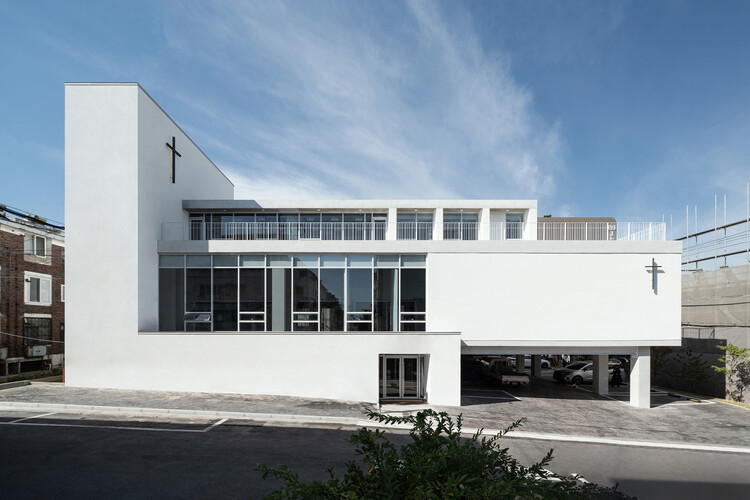 A description of the text provided by the architect. Nowadays, the church serves not only as a pure church but also as a community facility. If a church playing such an intermediate role overwhelms the surroundings with its glamorous appearance, it would be absolutely impossible to avoid friction with the surroundings. We thought that urban churches need to look simple in order to be considerate of their neighbors. Such formative simplicity in a busy downtown landscape can bring rather stronger symbolism.

Through proper opening planning of simple-shaped buildings that allow openings to open and eliminate openings to close, the windows of the church can be functionally manipulated, while at the same time the main hall, stairs, etc. Space light. Building a church with an appropriate opening plan that creates a strong symbolism in an urban area in a simple form with a limited budget and can fully demonstrate its original function is the cornerstone of the church architecture that we pursue.

The most important thing in the plan was that the new church would naturally blend in with the surrounding buildings. The land given was in a residential alley, one block inside the main street, and was densely surrounded by three- or four-story homes. Due to lack of parking space, old buildings and vehicles were parked in these narrow alleys, making the surrounding landscape more crowded. Given the condition of the land like this, the flashy church may only give a sense of coercion to the surroundings, but I thought it would be difficult to fit into the existing landscape. Our intention was to approach our neighbors with a simple shape and a spartan look so that they wouldn’t feel the pressure on the church building. We intended to create a space where people could experience the richness of space and face God.

Considering the situation of the neighboring land, we planned a three-story horizontal mass building. The space was roughly divided according to the program on each floor, and consisted of a cafe on the first floor, a church main hall on the second floor, and a cafeteria on the third floor. Each floor is not the same floor, but is designed so that each floor is pulled out of the street as it gets higher, with the aim of minimizing the coercion that the church building can give to the surrounding buildings. .. Given the spatial order required by the church, a rectangular space was desirable so that various rituals could be performed.

We designed a rectangular plane with a symmetric modular structure, adding symmetry, which is one of the characteristics of religious architecture. Therefore, the 1st and 2nd floors have auxiliary spaces symmetrically arranged around the lobby and the hall with multipurpose stairs, and the 3rd floor, which is relatively smaller than the 2nd floor, surrounds the central dining room with rooms. Cores such as vertical circulation and toilets are arranged vertically so as not to overlap with the main circulation flow centered on the multipurpose stairs, and placed at the edge of the building without following the rectangular plane flow. He also tried to clarify the identity of the church by expressing the vertical space of the staircase hall with a solid mass instead of spirea.

The proper opening plan we came up with from the land in this new discipleship church was to close the first floor and open the second and third floors. Due to the underdeveloped surroundings, I thought that both the experience of looking from the inside to the outside of the church and the experience of looking at the inside of the church from the outside were not appropriate, but rather caused a conflict. The purpose is to minimize human contact from the streets by firmly blocking the first floor and allowing people to meet each other inside the building. On the other hand, in order to brighten the dark alleys, we designed the façade of the church to be bright by opening the 2nd and 3rd floors wide and creating a bright image that changes the atmosphere of the undeveloped environment. Environment by applying white stucco.

Due to the church’s characteristic that people meet on Sundays rather than every day, it needed a circulation plan that could accommodate such a huge stream. The grand staircase in the center of the church not only solves this circulation problem, but can also be used as a staircase cafe or concert hall for uncrowded children on weekdays, and as a worship area when there is not enough prayer space. You can take advantage of it. .. The first floor, which is operated as a public hall, changes its characteristics according to the use of the multipurpose grand staircase, creating the spatial characteristics of the entire church. Therefore, although the core space of the church is the Great Chapel, the multipurpose staircase plays the most important role in the overall architectural plan.

We planned the congregation to have a religious experience in the process of moving up the stairs to the second floor towards the Great Chapel. In the lobby on the second floor, you first face a cross made of walls that stretch vertically to the ceiling, and the exposure spreads to the side. Cross and long, narrow vertical window. Through such a space design, you can see the symbolism of the church one after another from the lobby to the large chapel. In addition, the interior space on the second floor, excluding the Great Chapel, is separated from the lobby by glass and looks open, but thanks to the long descent, the majestic atmosphere of the church is maintained. This rebir gives the lobby space a territory and at the same time maximizes the sense of openness the moment you enter the Great Chapel.