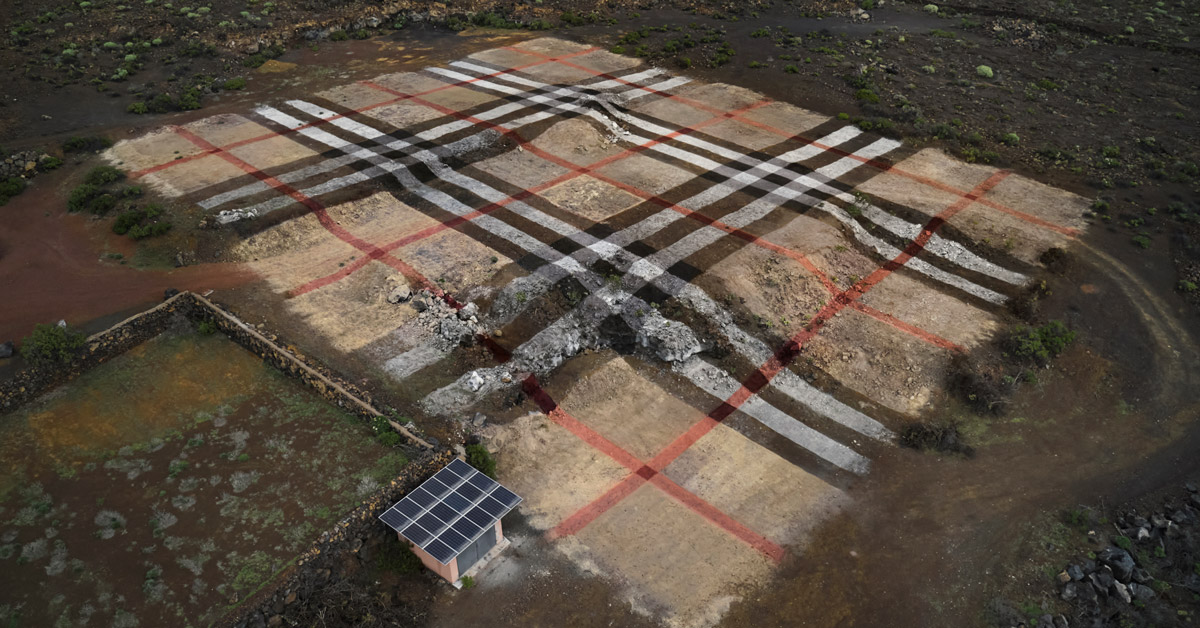 British fashion house Burberry has used milk-based paint and flowers to create a pair of temporary installations in the Canary Islands and South Africa that mimic the brand’s signature check pattern when viewed from above.

The project was designed as part of the Burberry Landscapes series, in which creatives collaborate with the brand to produce temporary site-specific landscape art.

One installation was designed in the Canary Islands, where it remained for one week last November before being swept away.

Cuban-American artist Jorge Rodriguez-Gerada used natural milk-based paint to create a large-scale version of Burberry’s signature check pattern across a volcanic terrain on the island of El Hierro – the first self-sufficient island in the world to use wind as its main source of energy, according to the brand.

“One of the things I enjoy about this paint process is that it is created from minerals,” said Rodriguez-Gerada.

“So, as you mix your colors, it’s like alchemy.”

Seen from an aerial perspective, the signature geometric stripes of beige, red, black and white were draped across the undulating landscape and mimicked the fashion house’s cashmere plaid scarf, one of Burberry’s most famous accessories introduced in the 1970s is.

The temporary illustration was removed from the site by wind, as well as the use of hand-turning and local water sources in an effort to leave no traces behind.

A meadow in Overberg, a region east of Cape Town in South Africa, formed the background for the second installation.

Early last December, Burberry commissioned local experts to plant flowers across the meadow in a similar shape to Rodriguez-Gerada’s project.

Native African daisies and honey-scented helichrysum petiolare were chosen to echo the Burberry colors and attracted birds and insects while keeping the installation intact.

Water obtained from a rainfall catchment pond fed the plants before being turned over to break down and compost back into the earth within a week.

The fashion house chose El Hierro as a nod to Elsie Burberry, who was the daughter-in-law of the brand’s founder Thomas Burberry. Elsie traveled to the Canary Islands in the early 20th century where she formed a connection with the region’s landscapes.

Western Cape was chosen as a reference to the late pilots Betty Kirby-Green and Arthur Clouston, who co-piloted a Burberry plane from London to Cape Town in 1937 and landed it near the meadow in Overberg.

Burberry creates a rainbow tartan in support of LGBT charities

“[Burberry Landscapes intends to] complement global landscapes in original ways through natural materials, while demonstrating a continued commitment to the pursuit of sustainable practices,” said the brand.

“Together, these landscapes embody Burberry’s belief that creativity opens up spaces,” it added.

Previous iterations of Burberry Landscapes have included the use of sand sculptures, drone displays and hot air balloons, and have appeared in locations such as above a Colorado reservoir.

The iconic Burberry check motif was first used as an accessory in its own right in 1967 when Paris-based buyer Jacqueline Dillemman removed the check lining from a coat and repurposed it as a luggage cover and an umbrella cover.

Founded in 1856, Burberry has created a mirrored pop-up store on South Korea’s Jeju Island to reflect its mountainous surroundings, while the brand has also designed virtual clothes for the video game Minecraft.

The images are courtesy of Burberry.

12 cozy corner ideas for your home to curl up in