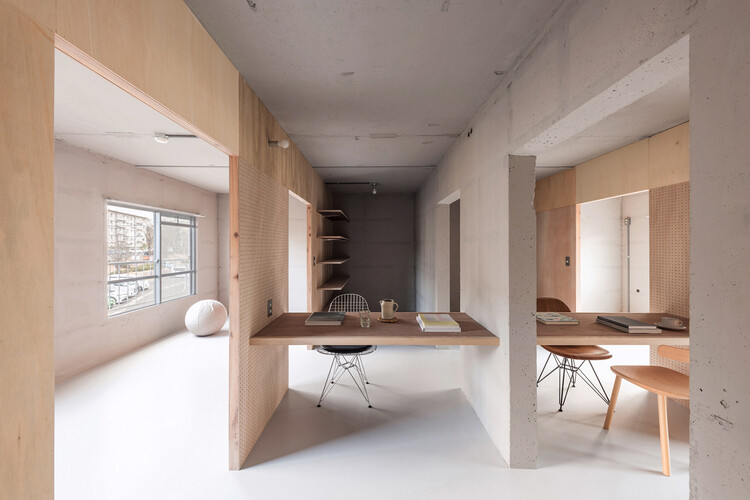 A description of the text provided by the architect. The Chayamadai housing complex is a typical example of a Japanese housing complex in the 1960s. Enough space between the adjacent building and the stairs of the residential unit ensures that natural light enters from both sides of the building and all units are well illuminated.

It was expected that the concrete frame of the central structural wall and beams would remain. In the process of renovation, I thought it would be meaningful to utilize the existing structure without going against the original spatiality. This project proposes a new way of life, considering the relationship between the reinterpretation of the existing structure and the lighting space peculiar to the apartment house.

Plans A and B leave the existing structural wall with two openings in the center and position the newly inserted wall and frame according to the openings in the old frame. By reinterpreting the existing one, we were able to realize a characteristic spatial composition that allows natural light and air to pass through.

In Plan C, a large beam was left in the center, and a frame with multiple walls and openings was inserted around it to create a soft space where light could circulate. Through these new elements, you can see the greenery of the apartment and the buildings across the street. In the presence of existing concrete frames, I wanted to create a positive spatial experience of the surrounding environment by consciously manipulating the materiality and scale of the inserted elements.

Plan A-Two new walls were inserted parallel to the existing walls, creating four separate lanes. Spatial depth is achieved by a visual linear flow and the resulting perspective of the north-south axis. I wanted to create a sense of stratification that would allow some privacy by setting multiple thresholds in succession, assuming that family relationships would change as the child grows up.

Plan B-The new wall will be inserted parallel to the existing wall and the frame will be placed perpendicular to the wall. By creating a figure eight cycle in the open plan, there is less space division and different scenes can overlap. Workspaces and study areas are located adjacent to the entrance, living room and bedroom to accommodate different lifestyles.

Plan C-This unit is a single open space that can be easily circulated through four intersecting walls with openings. The 45 m2 unit is divided into nine small parts to create different spaces. Combining areas for hobbies, socializing, reunion and relaxation encourages free use of space.