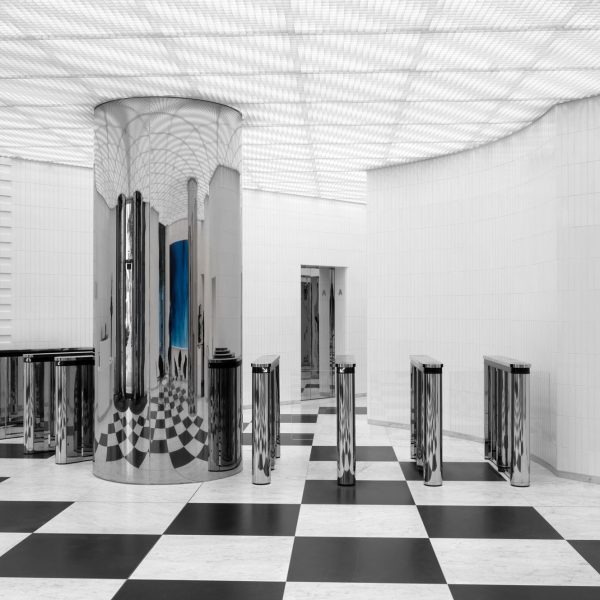 Swiss studio Christ & Gantenbein has completed its upgrade of UK House on Oxford Street, with a baroque-influenced lobby informed by the building’s history.

The refurbishment of the Grade II listed building aims to respond to the need for communicative corporate architecture. Designed to be a welcoming “place of arrival”, the new lobby combines the baroque themes of the existing building with modern elements.

“We envisioned this lobby as a place full of hospitality, with a unique blend of baroque and techno-futuristic elements,” said Christ & Gantenbein’s founding partner, Emanuel Christ.

“The result is a creative spatial identity and spacious succession of rooms that provide high-quality experiences for the tenants and visitors.”

Christ & Gantenbein’s renovation extends to the building’s conversion into an office block during the 1970s. The structure still has two of its original baroque facades, which partially inspired the design of the new lobby.

“We worked with this history to generate our vision of corporate architecture in the 21st century: bold, futuristic, open, communicative, yet steeped in history,” said the studio.

Large windows framed by bronze metal at the front of the building draw on the surrounding retail facades of Oxford Street. The foyer is accessed through a pair of revolving glass doors with chromed stainless steel frames, offering views of the mirrored columns within.

Inside the lobby, Christ & Gantenbein have placed a reception desk and a coffee point, along with an additional space that can be used for meetings. A work by artist Wolfgang Tilmans appears on the right wall of the space. 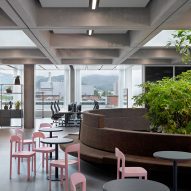 A marble floor of black and white stone spans the space and forms a checkered pattern that refers to the history of the building.

A metal grid ceiling divided into a more subtle grid echoes the checkered pattern of the floor, spanned by linear lighting elements that illuminate the foyer.

With “apse-like” ends projecting slightly into the vestibule, the walls mimic the original baroque forms of the building. The walls are covered in neutral ceramic tiles that serve as a subtle backdrop to the space.

Mirror columns reflect the patterns from the floor through the lobby, while polished chrome elements, including the elevator doors, appear throughout the space.

Beyond the lobby, the addition of new stairs and elevators connected the entrance hall to a basement space with a separate lobby for cyclists and a multi-level bike storage space. Black and white patterns on the epoxy floor mark the route to the bike shop, transitioning into a circular pattern to mark the entrance to the changing room.

Other amenities on the level include showers and lockers, along with ultra-modern studio-designed elements arranged throughout the functional space.

Architecture studio Christ & Gantenbein, founded in 1998 by Emanuel Christ and Christoph Gantenbein, has been named Architect of the Year in Dezeen Awards 2018.

Other projects recently completed by the studio include a multifunctional workspace in Germany and a museum for the chocolate brand Lindt.

The photography is by Thomas Adank.

Connecting fans to the artists with NFTs – Public Pressure – SlateCast #41