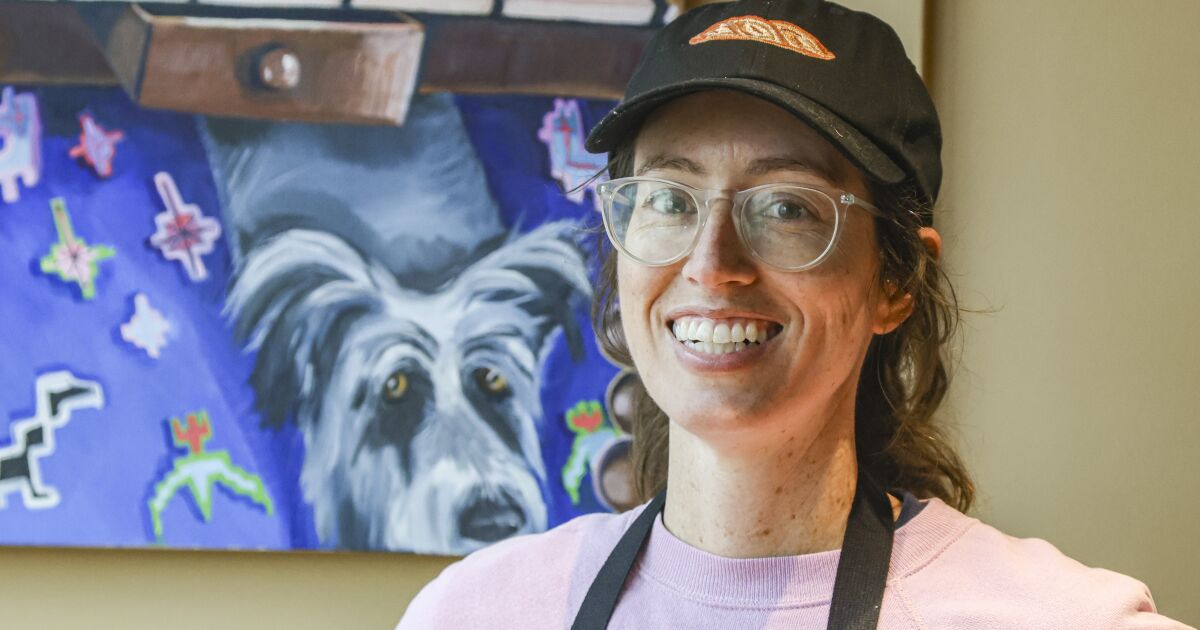 A North Park eatery created by Chelsea Coleman and her business partner, Rae Gurne, has been highlighted by Eater.com as one of the top 15 American restaurants to open in 2022.

The owners were as surprised as anyone to be selected for the elite list, putting their restaurant with its unusual name, Mabel’s Gone Fishing, on the national foodie map.

“Sean Brock is on that list — he’s one of my heroes. So it’s surreal. It’s crazy,” she says of the New York Times bestselling cookbook author and celebrity chef. Brock’s restaurant, Junie, opened last July in East Nashville.

Eater.com, owned by digital Vox Media, is a national food and restaurant review website founded in 2005 in New York.

What would her late father, National Radio Hall of Fame announcer Jerry Coleman, the longtime voice of the Padres, have said? He was known for his colorful sports commentary punctuated by head-scratching remarks known as “Colemanisms”.

“He would make fun of me for naming a restaurant after my dog ​​(Mabel),” laughs Chelsea, explaining that it would be his way of acknowledging that they had both turned their pets into minor celebrities. Jerry often mentioned his dogs on the air and sometimes brought them along to Petco Park. His dog, Gus, even attended his memorial service at the ballpark.

Chelsea hung a portrait of her father’s dog, Lola, in The Rose.

Jerry died in 2014 after a fall at the age of 89, so he was not around to witness the height of her culinary success. But she inherited his work ethic.

The restaurant and sports worlds have similarities, Chelsea notes. Both are tough and require tremendous dedication, preparation and hard work. Like a professional athlete, she has to show up day after day.

“I think he would be so pleased with how hard she’s worked and how well she’s doing,” notes Chelsea’s mother, Maggie Coleman, a longtime La Jolla resident. She describes her daughter as a determined, extremely disciplined worker who cares a lot about her employees.

Mabel’s menu is inspired by dishes that Chelsea and Gurne discovered when they explored Spain – particularly the Basque region and the Iberian Peninsula – in 2018 while researching the new restaurant concept.

The name, Mabel’s Gone Fishing, was inspired by Chelsea’s beloved dog, Mabel, who used to feature in her social media posts. She found Mabel as a puppy on the side of the road in Patagonia, Argentina, while working at a hotel restaurant near a popular hiking trail.

The fictional mermaid fantasy of Mabel is printed on the menu. The beach-loving dog is sucked into a swirling vortex where she befriends a dolphin and feasts on a variety of seafood before being dropped off on a distant unknown shore somewhere in the Mediterranean.

The story goes on to say that postcards arrive from time to time from various beach towns, always signed: “Go fishing.”

The restaurant’s nautical theme ripples through its eclectic decor that includes a dolphin-shaped toilet faucet, mermaid figurines in the bar, rustic wooden folding chairs, Mabel’s paw prints in the entrance and her image immortalized on original wall art.

The menu includes dishes with fresh oysters, mussels and other seafood, natural organic vegetables, Basque-inspired cheesecake and a selection of natural spirits and organic wines from small production wineries.

The restaurateurs call their bar a gintonería because it specializes in Spanish gin and tonics, along with cocktails, wine and other food. Their bottle shop next door, Bodega Rosette, sells wines and natural gin.

“I like to say she learned to cook in self-defense. I’m not much of a cook,” Chelsea’s mother confesses. From a young age, Chelsea often accompanied her parents on Padres road trips and was exposed to a variety of restaurants.

Chelsea, who attended the University of Virginia and pursued a culinary program in Florence, Italy, says she loved baking from an early age. “I forced my friends to have a restaurant night and cook food for the family, and they would suffer because of it,” she laughs.

Gurne brings front-of-house experience to the operation, while Coleman is co-chefs with Dan Luong (of The Rose kitchen) and Ross Garcia. Garcia’s wife, Neale Holaday, an accomplished pastry chef, runs the business partners’ Secret Sister bakery (next door to The Rose), which makes desserts for the restaurants.

“San Diego has so much potential here with our climate,” says Chelsea, noting the abundance of local organic farms.

California leads the nation in organic farm production. A 2016 University of California report singled out San Diego as the county with the most organic growers in the state.

“We have the diversity and abundance, and it’s an exciting place to be and to cook,” says Chelsea. “Some amazing restaurants have popped up in the last six years.”