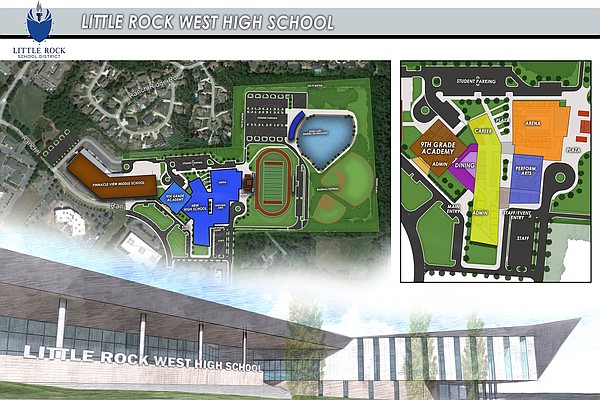 One of the decisions to be made is what to do with the dam.

The Little Rock School District’s second new high school building in a decade is in the planning stages regarding its academic programming and physical features.

The new West High School building is scheduled to open for the 2025-2026 school year on land with a small lake that is immediately east of Pinnacle View Middle School, 5619 Ranch Drive, in the northwest part of the district.

The new high school building is one of the projects being funded with the proceeds of a Nov. 2, 2021, voter-approved 12.4-mill property tax rate extension.

Other district projects that are similarly funded are the construction – which is now underway – of the new Dr. Marian G. Lacey Academy for kindergarten-through-eighth grades on Geyer Springs Road and replacing decades-old portable classrooms with permanent classrooms at historic Central High.

Preliminary plans for West High call for a three-story building with an arena and performing arts space to serve about 1,200 students, Kevin Yarberry, the district’s director of maintenance and operations, said recently. Lewis Architects, Engineers are the designers.

The land owned by the district includes a pond roughly the size of a football stadium. Some in the district have looked at the dam and see an opportunity for a wetlands studies program or for “aqua lab/marine technology” as it is labeled on preliminary construction plans.

Others who responded to an initial survey about the school warned that the dam could be a hazard and subject the district to liability in the event of accidents.

Yarberry said with a laugh that he is not currently in the aqua-lab camp.

“Do I think it would be valuable space for a field house or additional practice field or soccer field? Yes, I do,” he said.

“That’s where I see the value now without understanding what the curriculum looks like. I’m not sure how the pond would relate.”

Plans are not yet set, but the new school building will be a traditional high school that may incorporate elements of the already existing West High School of Innovation. West High School of Innovation opened in the 2019-20 school year under the direction of the Arkansas Board of Education. This was at a time when Little Rock County was operating under state control.

The School of Innovation offers flexible scheduling with on-site and online instruction centered on project-based learning. The school also has two young “career academies” — one focused on animal and plant systems and advanced professional studies, and the other an academy for digital marketing, design and logistics.

The new high school building is also to house “career academies” that are being established in high schools throughout Pulaski County to provide students with opportunities to learn core academics in the context of specific careers. Some schools are expected to have wall-to-wall academies, meaning that all students will be enrolled in them. Pocket academies are another option in which students do not have to be part of a career academy but choose that option.

The choice of vocational academies and whether they will be wall-to-wall or pocket academies are some of the decisions to be made for the new high school building.

About 82% of 511 respondents who responded to an initial district survey about the new school building indicated a preference for academic themes focused on business and finance, architecture and design, and medical and biotechnology, said Shay Loring, the district’s director of secondary education, said. Slightly less popular were academics on urban agriculture, digital design and medical systems and technology.

Within each academy there are several career “paths”. Students will choose an academy, then choose a more specific career path within the academy, and then take at least three courses within the field during the time they are in 10th through 12th grades.

Each route provides opportunities for students to shadow in different career fields, take tours and serve as work interns, said Shameka Montgomery, the district’s director of career and technical education.

Grade 9s follow a first-year seminar course that introduces them to academics and pathways.

The West High School of Innovation for grades nine through 12 is now housed in what was a multistory office building that served as the headquarters for a long-defunct company that published craft materials.

With the construction of new school space, the original office building could become home to ninth graders, Yarberry said.

“It’s a logical option to house freshmen in the original building,” Yarberry said.

The spaces for freshmen and for the older students can be separated by some shared common areas such as the school cafeteria.

Loring, the district’s director of secondary schools, said that 74% of respondents to an initial parent survey about the school plans indicated a preference for giving freshmen some separation from older students in the high school.

Melissa Gude, the Little Rock district’s chief academic officer, highlighted some of the oft-cited preferences expressed by those who responded to the survey:

• Space for the school to expand or grow.

“A lot of this is being considered,” Gude said of the preferences identified in the first October/November survey, particularly the separate space for 9th graders.

A second survey is available for community members asking about the academics and the school’s mascot. Those interested in that survey can access it by using the QR code provided on the district’s website under the “Latest District News” link to “Wester High School Community Update.”

Yarberry said he expects decisions on the West building and a guaranteed maximum price to be set for it by spring. The district used $85 million as an estimated cost for the project.