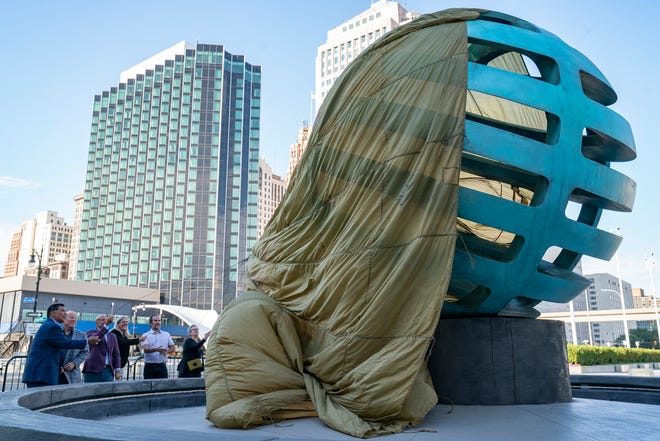 DRCFA Chair Lisa Canada said 75 artists responded to the foundation’s initial call for submissions, and Hocking was ultimately chosen for “his vision and creativity and his commitment to the arts in the city of Detroit.”

Hocking said his first meetings with the foundation began in March 2020, before the latest convention center renaming.

“Back then it was the TCF Center,” he recalls, “and even the materials we were given were in folders that still said Cobo Hall. “Things have changed so much in such a short time – within weeks the COVID lockdown happened.”

The artist drew on his love of history for inspiration in designing the sculpture, referencing the Detroit River and its shoreline just beyond the walls of Huntington Place.

“I love the history of Detroit,” he said. “I love digging through those layers of what was here before, and what it means to put something here now. We are within the original boundaries and fortifications of the city of Detroit when it was just a village, and right behind me was the Citadel. The Citadel was like the defensive core of this village… (which) led to making this piece that felt like this kind of protective, strong piece.

“It is made of bronze, which is 90% copper. My ancestors were Cornish copper miners from the UP; the buyer came down the waterway to make all the industry in Detroit. All those things come into play. I want to thank the city of Detroit. It’s been a constant inspiration throughout my life—that’s why I’m still here.”

The reveal comes as Huntington Place prepares to host the North American International Auto Show, which opens to the public on Saturday, September 17 and runs through September 25.