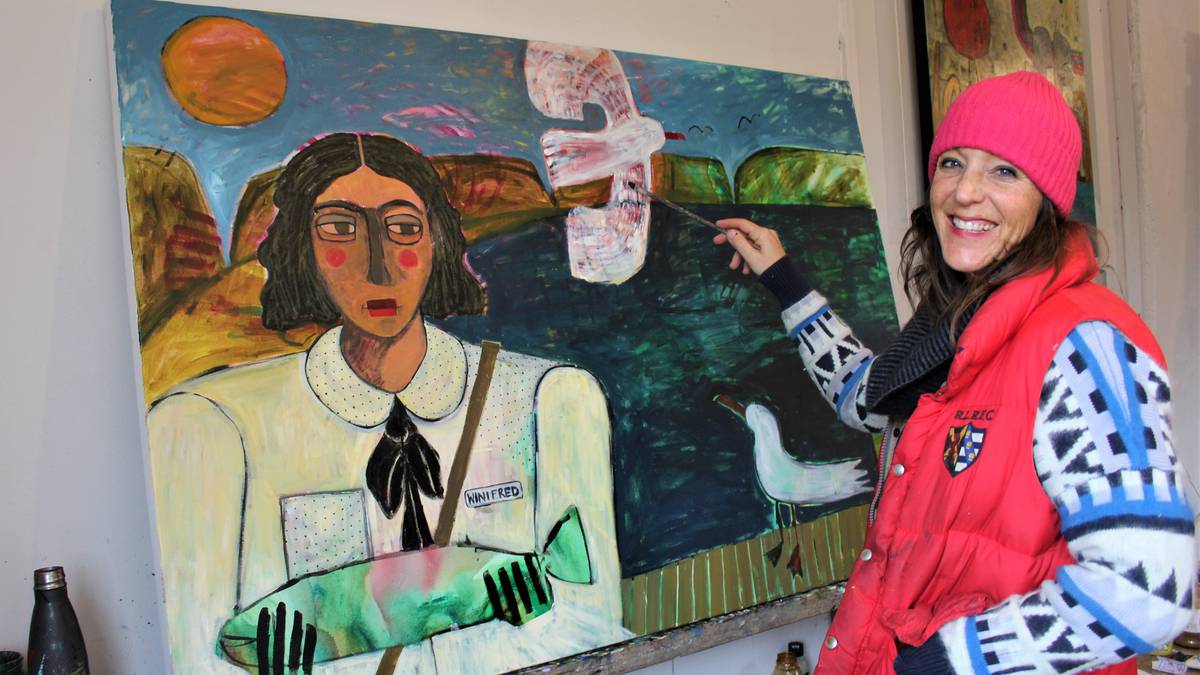 Emma works and exhibits from her studio space at Holtom’s Art Studio in Paekākāriki, using the studio to produce experimental and abstract figurative pieces while also studying at The Learning Connection in Lower Hutt.

“The day I painted Red Handed I went crazy doing all kinds of abstract stuff. I must have painted five pieces already that day,” Emma said.

“You often enter art competitions and you don’t even get made a finalist, so it was just exciting to be a finalist.

“When they read out the winner and said my name I couldn’t believe it, I didn’t think it would be me.

“I just thought it would be fun to go up and meet the other artists – it’s great to talk to people who are doing the same thing as you and learn about their practice, how they do it, how they sell it and make a living out of it and that kind of stuff.

“So winning was really cool, it was so fun. I had my mom there and she was really excited.”

Judge Reuben Patterson, one of the country’s top contemporary artists, said the experimental process Emma used to create Red Handed resulted in a work that exists as “a celebration of adversity”.

Emma’s original idea was to paint on a piece of linen she soaked in a bucket.

Placing it on top of a piece of old MDF so she wouldn’t get paint on the floor, Emma began painting a swimmer.

Placed face down, the linen absorbs an image, like the Shroud of Turin.

It collects the exploits and remains of the environment, or of the previous night, collects hair and mementos of tape and collage that refer to bodies violently surrendered to arrest and control.

When Emma pulled the linen off the MDF, the effect on the board underneath was too good to throw away.

“When I lifted the linen, it was so amazing what the paint did underneath, I only had to make a few small changes to it afterwards, straight on the plate.

“I started to paint a swimmer, but when I saw the hands turned quite red and in the air, I thought it looked like the person had been caught red-handed.

“But people put their hands in the air for so many reasons, it could be in welcome, in prayer, to be arrested, I wanted it to be ambiguous and for people to decide for themselves.”

“When I thought about it, I just wanted it to be any person, so the viewer could make up their own story.”

Emma often gives no specific gender or race in her abstract figurative pieces.

“Generally with my work I like to give people some ideas but I want to hear their own interpretations and what they think it’s about.

“Often it’s a lot cooler than I originally intended anyway.”

Emma’s winning work was chosen by judge Reuben Paterson and was announced at the 2022 National Contemporary Art Awards at Hamilton’s Waikato Museum, Te Whare Taonga O Waikato, over the weekend.

Through the National Contemporary Art Award’s traditional blind judging process (which conceals the artists’ names from the judge), Red Handed was selected from 34 finalists and more than 300 entries.

All the finalist works are now on display in a free exhibition at Waikato Museum Te Whare Taonga o Waikato until November 13.