Florian Ledoux: The icy patience of an Arctic photographer 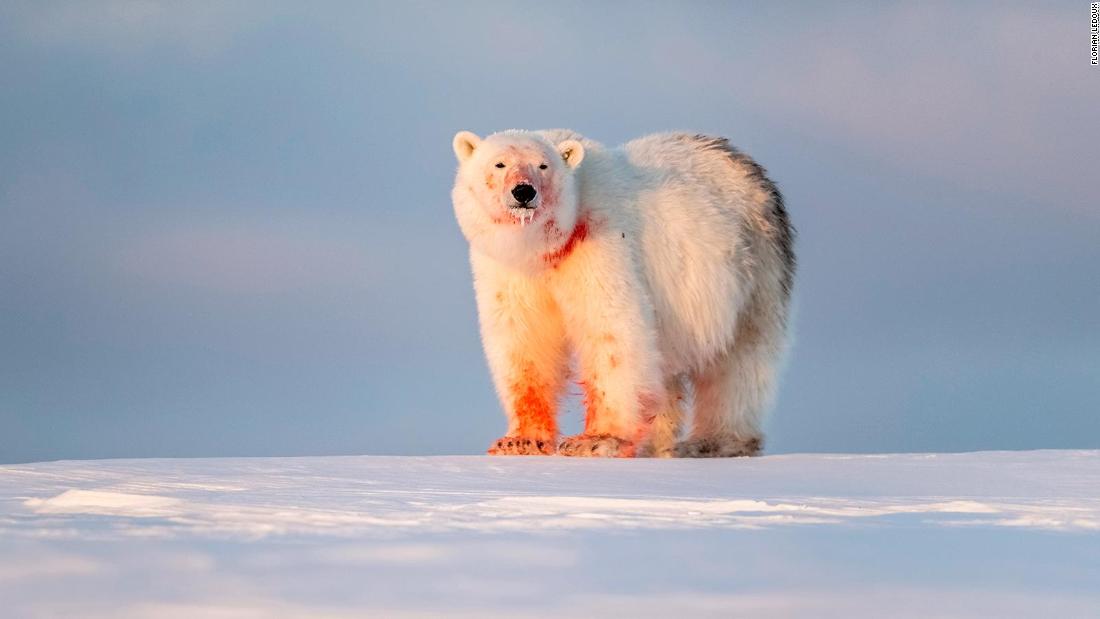 (CNN) — The polar bear was just a distant speck in a frozen white expanse. A film crew started following at a distance and gradually got closer. Suddenly, the bear picked up a scent and changed direction — the crew followed, hoping it would lead to footage of a kill. The bear stopped at a seal hole in the ice and began to wait. So is the crew.

For 12 hours they sat and waited for the bear to make a move. For 12 hours the bear lies half asleep, half awake at the edge of the hole. It was too long; the crew worked on the sea ice for 22 hours straight and had to return to camp. Cold and exhausted, they conceded defeat. Hours of waiting for little reward is not uncommon. “This is the price we pay to get unique images,” says the award-winning French photographer and filmmaker Florian Ledoux.

That’s the reality of wildlife photography — it’s always on nature’s terms. But that is also its challenge and appeal. “Every shot we get in the Arctic is a battle,” he says. “We push our limits; we feel alive doing it.”

Ledoux uses a drone to capture a new perspective. Here, a young polar bear pulls itself onto the ice.

Ledoux speaks to CNN on a video call from his home in Tromsø, northern Norway. He is wearing a red and white knitted turtleneck and at just 2pm local time the sky through the window behind him is a rich indigo in December’s polar night.

He has spent the past two winters on the Arctic sea ice, filming iconic scenes for the BBC’s nature documentary series “Frozen Planet” and the Disney film “Polar Bear”, among others. Driven by a passion to preserve nature, his extraordinary aerial photography has earned him awards such as the 2018 Siena International Photo Awards Drone Photographer of the Year and Nature TTL’s Photographer of the Year in 2020. Now he is planning for his 2023 winter expedition, which will see him depart from Longyearbyen, the world’s northernmost settlement, to spend days and nights on the sea ice.

“If we start at the end of February, we have a little light. The sun passes above the horizon around 11:00 or 12:00 and then it’s dark at 2:00 or 3:00 p.m.,” he explains. From then on, the hours of light increase rapidly. “At the beginning of April you can no longer see the stars, and by the middle of April you have the midnight sun,” he adds.

Ledoux is attracted by the enormous and endless Arctic landscape. Here he and a colleague are pictured on snowmobiles on the east coast of Svalbard during the winter.

The months when the sun is just starting to break through create the perfect palette for a photographer, says Ledoux. Every pastel shade of blue shines through and as the sun disappears, a pink belt shines on the horizon.

But capturing this Arctic twilight comes at a price. Ledoux describes how the obliterating winter conditions take their physical toll — overwhelming darkness and low vitamin D levels affect your mood, the lack of routine messes up your body clock, and you’re forever battling the bitter cold, with temperatures dropping on some days . minus 40 degrees Celsius. On those days, everything you touch with your bare hands sticks to your skin and every time you exhale, the moisture freezes on your face, he says. Despite wearing several layers of clothing, large down gloves and a neoprene face mask and ski goggles, the cold is biting through.

Yet these are the days Ledoux lives for. There was a time last winter, when the air was crisp, the sun was low, and an intense silence enveloped the sea ice. He saw steam rising from behind an iceberg and followed it with his drone and discovered a large male polar bear sleeping on the ice: “His body was warm and as he breathed, smoke came out of his mouth like a dragon. ”

Ledoux bundles up to face the elements.

Despite being out of most human contact in the wilderness, Ledoux is often at the mercy of a producer’s shot list. Disney, Netflix or the like will request a specific shot of a polar bear, such as a successful hunt or a mating scene. Ticking it off can take days or months, but the key is not to rush it.

After a bear is found, the crew will follow at a distance before gradually approaching. “We want to make sure the bear likes us,” says Ledoux, adding that the bear must feel comfortable in their presence to capture honest and unique behavior. If a bear is skittish or reacts badly to their presence, they will stop chasing it. “It’s just the way it is – if it doesn’t want to be the star, you can’t force it.”

A polar bear is photographed after feeding in Svalbard.

Over time, Ledoux believes you begin to recognize individual bears. Some look different, with the shape of their face or physical marks giving it away. Others have distinct characters; some are shy and some are curious and playful.

One of his signature photos, which took pride of place in Disney’s “Polar Bear,” shows two bears joyfully ice-skating together. Ledoux had never seen two bears having so much fun: “It was pure magic. We were so high afterwards that we forgot to eat all day or night.”

The feeling of being close to a polar bear is addictive, he says. The first time he saw one, he had goosebumps, and despite hundreds of encounters since then, that reaction hasn’t subsided. “They are so majestic and beautiful … It brings up a lot of emotions,” he adds. His aim is to convey these emotions through his images.

Ledoux watched these two polar bears for hours, playing and ice skating together.

One of Ledoux’s photos, which landed on the cover of Oceanographic Magazine and Wildlife Photographic, shows a polar bear jumping precariously between broken pieces of ice. It sends a message of fragility and reflects the threat of shrinking ice sheets. The Arctic is warming nearly four times faster than the rest of the planet, causing ice to melt and threatening the entire ecosystem that depends on it.

Even in the few years Ledoux spent exploring the Arctic, he witnessed these changes. It has rained for days in the winter months and the terrain they can work on is getting smaller as sea ice becomes less stable.

Aerial view of the Austfonna Ice Sheet melting during summer 2020, shortly after the Svalbard island group recorded its highest temperature since records began.

“It’s important to document,” he says, comparing his role to that of a war photographer, albeit at a slower pace and less threateningly dangerous. There is an urgency, and he feels a duty to record what is happening.

“Would I fly the drone just because I fly the drone? No,” he says. “The drone is a tool that allows me to capture some unique beauty and perspective of nature, to give a voice to the one who cannot speak.”