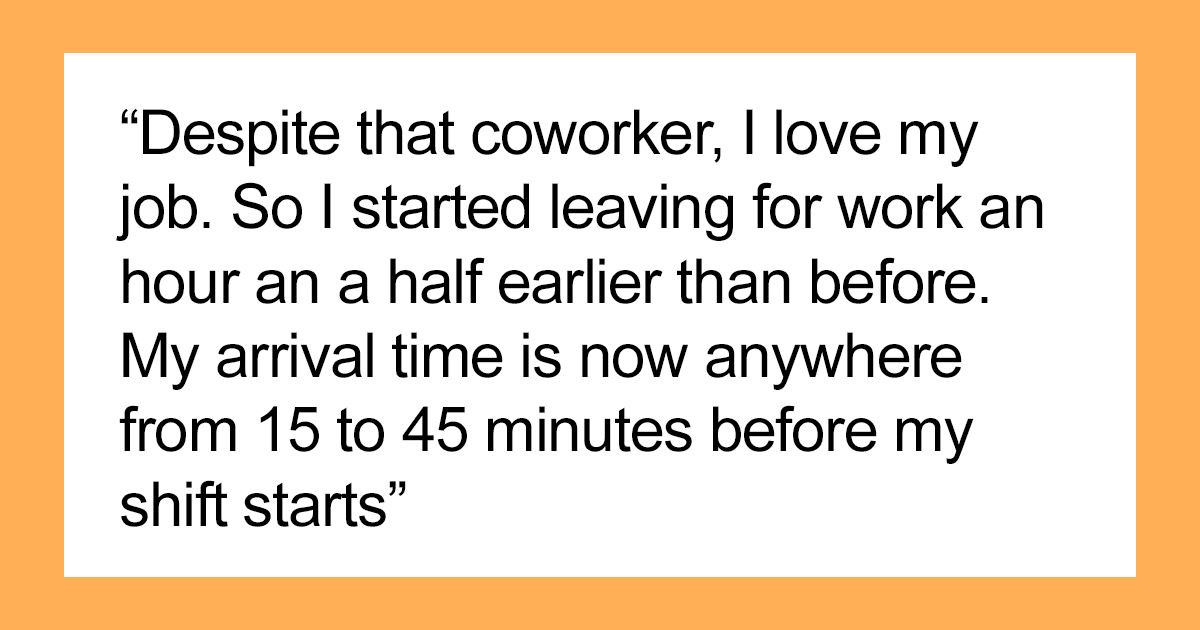 At the end of the 19th century, the great German Chancellor Otto von Bismarck said his famous phrase about people being more Catholic than the Pope. In those days the quote referred directly to the Holy See in Rome, but almost a century and a half has passed – and we use these words to name literally any person who is determined not only to perform their immediate job functions , but also constantly go beyond them.

“But a proactive employee is great!” you may say, and you wouldn’t be quite right, because proactivity is one thing, and toxic behavior in a team is quite another. It’s no wonder that when employees like this, which are found in so many companies, immediately get a little karma, their colleagues are secretly delighted, and we all love to read beautiful stories about such cases.

For example, like this story by user u/Apprehensive-Arm-614, first published in the Reddit Malicious Compliance community, which got over 24.1K upvotes and about 1.1K comments in a very short time. This story has it all – a mean colleague, their innocent victims and their just retribution. So, let’s find out together.

According to the author of the original post, they really love their jobs, but lately they are sometimes late once or twice a week. Not much – about five minutes, and not entirely through their own fault, because in the past year four bridges located directly on the way to work have undergone repairs at the same time. As a result, there were frequent traffic jams, and the Original Poster arrived at work later than necessary. 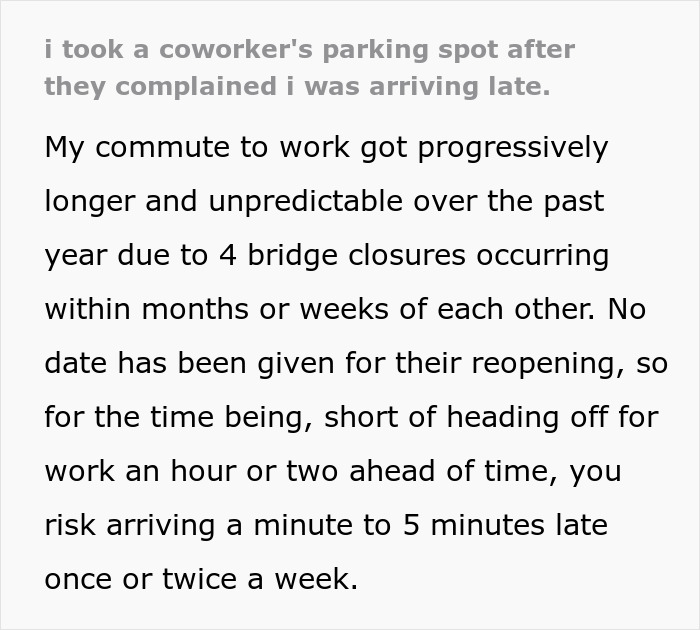 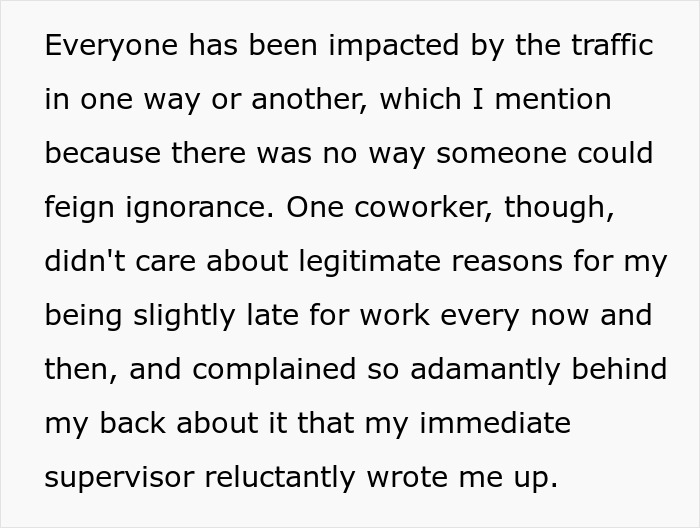 The co-worker continued to report the writer for being just a few minutes late, through no real fault of theirs

However, this is life, and no one is immune to force majeure. Yes, but unfortunately not everyone agrees with this. For example, in the company where the OP worked, there was another employee who constantly complained about coworkers to their superiors for their slightest mistakes. Overall, as the author of the report says, this colleague’s behavior was extremely toxic, even in everyday communication, and once even played a major role in a seasonal employee not being rehired the following year. 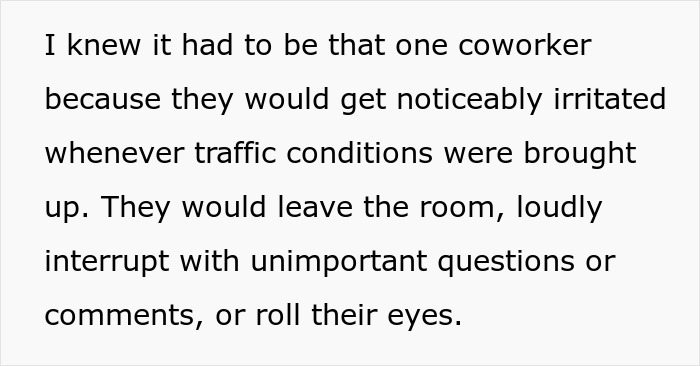 And so, the toxic worker’s new target was the OP and their tardiness. The colleague made comments to the author of the report several times, and then even started harassing the head of department with reminders about this, so finally the OP’s supervisor reluctantly wrote it up. Needless to say, the author of this story was not at all lucky to have such a colleague. And what can be done here? After all, the crook was in fact acting in full compliance with corporate rules. 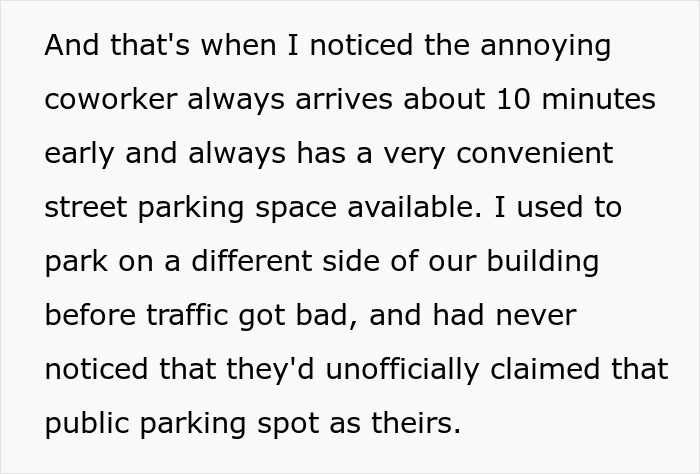 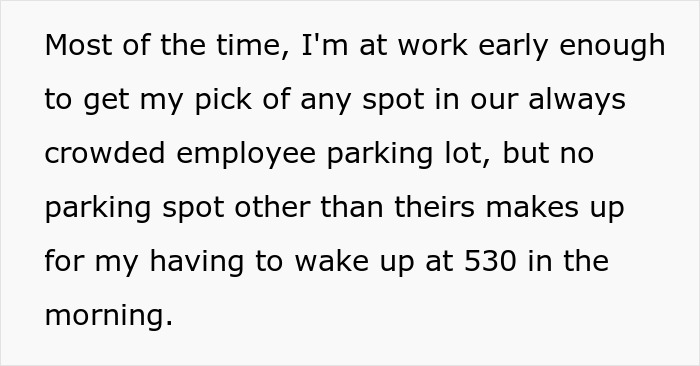 One day, the author just decided to arrive earlier than anyone – and take the snitch’s wonderful parking spot instead

However, one day an idea came to the Original Poster, and it looked absolutely beautiful. The author noticed that the cutting employee often arrives at work about ten minutes before the start of the shift and always parks their car in a very convenient place, right in front of the entrance of the building. However, this was not their dedicated spot – just at the moment they arrived, the perfect spot was always empty. Not for long… 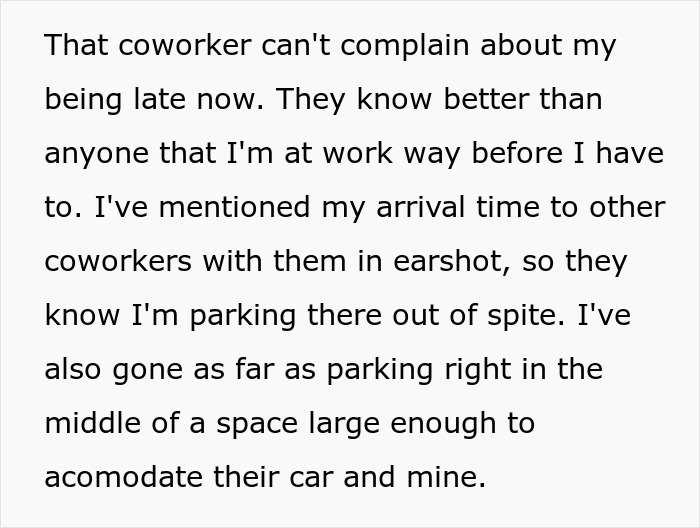 So, the author of the post decided that they would simply get up an hour or so earlier before work. Yes, it was quite difficult – but now the OP literally got to work before everyone else, sometimes even forty minutes before the start of the working day. And of course it offered a unique opportunity to be the first to choose a place to park their car. Now, please, guess which spot the original poster continually chose? 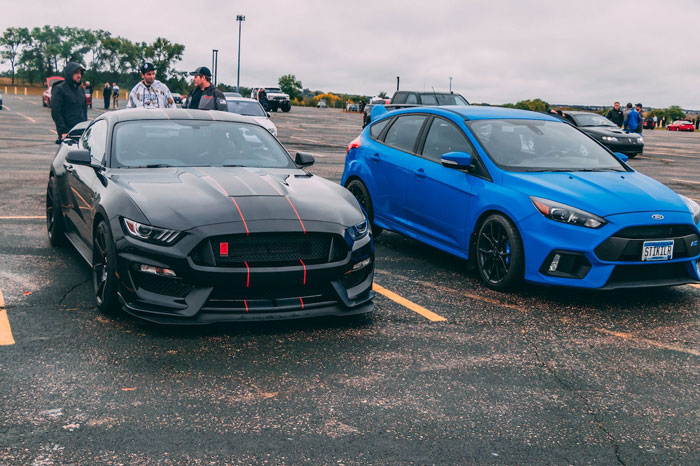 The colleague got really angry about this, but they couldn’t do anything since the author didn’t break any rules

The colleague was obviously beside himself with anger, but there was nothing they could do – after all, they were actually being paid back in their own currency. The original poster did nothing wrong, before everyone arrived at work, and the fact that the mean employee now had to search for a parking space for a long time – well, no one said that karma was a pleasant thing for everyone!

Most of the people in the comments simply praised the original poster for being so resourceful. According to commentators, there is no shame at all in the OP’s game. Someone simply went out of their way to put the author down, people online assumed, so the OP just didn’t hesitate to give the snitch a dose of their own medicine, which turned out great and fair. 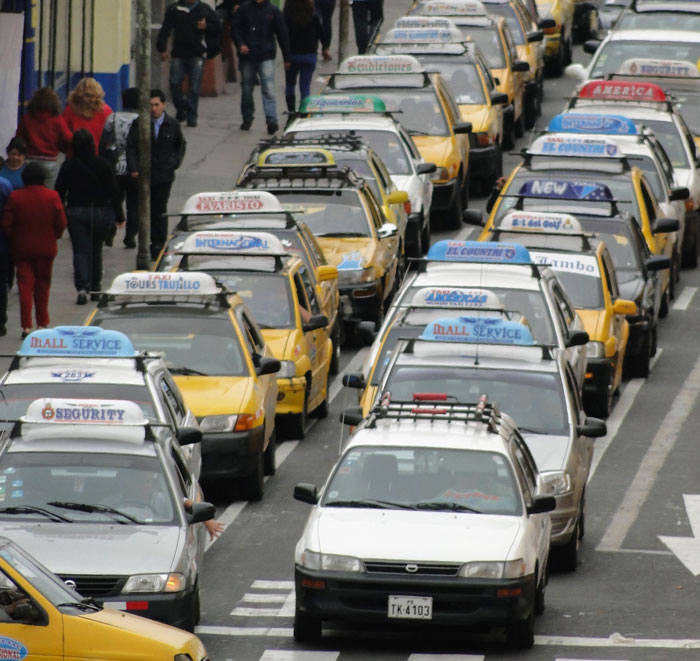 According to most of the commenters, this one is really good and not petty. Just make sure the original poster does what the puritanical moral guru so kindly escalated, people claim in the comments. “That’s awesome! Keep taking that parking spot every damn day!” another commenter stated.

For one reason or another, we are almost certain that you have also encountered this kind of employee in your own work, so please feel free to tell us how it was and how it all ended for both sides of the conflict. Well, if nothing like this has ever happened to you, please tell us what you think about this particular story.

“NFTs and Metaverse Become the Must-Have of the Global

‘She drunkenly asked me to do her a rudeness’: painting’s most baffling titles | Lynette Yiadom-Boakye