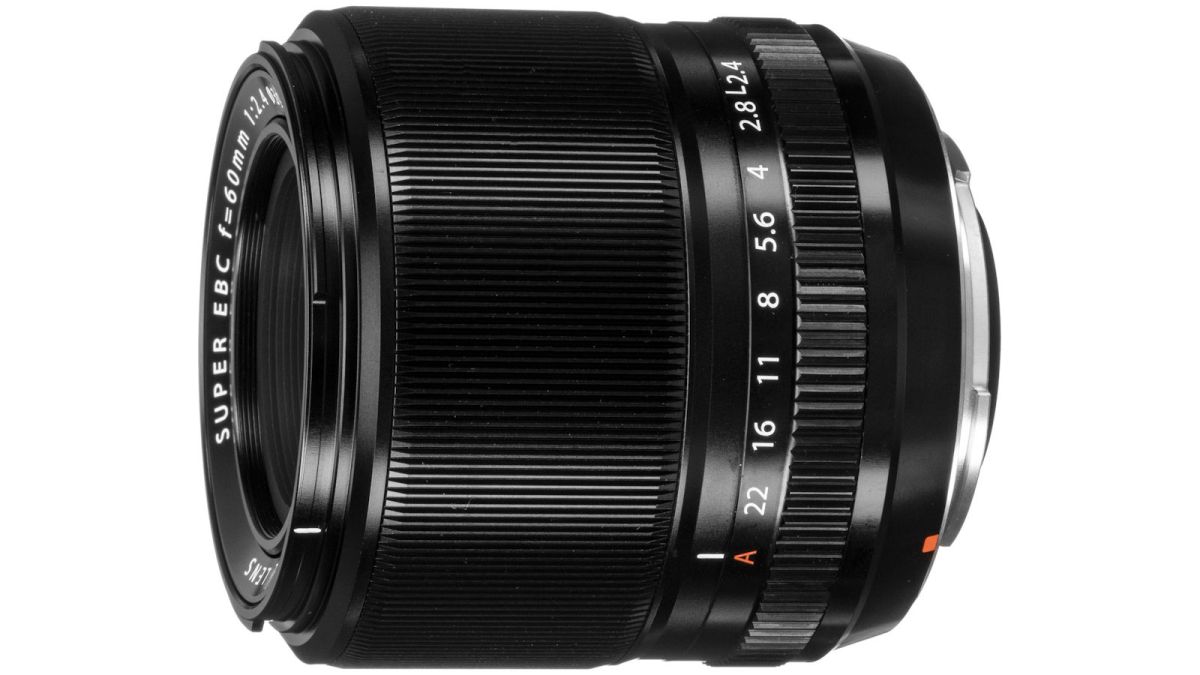 The Fujinon XF60mm f/2.4 R Macro is one of Fujifilm’s longest-running lenses for its X-mount cameras. Because of the APS-C format crop factor of 1.5x, it’s like using a 90mm lens on a full-frame camera. It also makes the modest 0.5x maximum macro magnification less of an issue, as magnification is also effectively increased to 0.75x in practical terms.

Typical of Fujinon R-series X-mount lenses, this one is well built and has a high quality feel. As an ‘R’ lens, it has an aperture control ring, giving you the option to adjust the aperture from the host camera body or on the lens itself. It works with the usual one-third f/stop click steps, but there’s no de-click option for stepless aperture control when shooting video.

The optical layout includes one aspherical element and one ED (Extra-low Dispersion) element, which aims to improve sharpness, clarity and color accuracy. Super EBC coating is also applied to reduce ghosting and flare.

As we’ve already mentioned, the maximum magnification ratio of just 0.5x is disappointing for a ‘macro’ prime, but certainly not unusual, as also featured in some of Canon’s recent ‘Macro’ primes for EOS R mirrorless cameras .

Autofocus is reasonably fast and quiet in general shooting, but there can be a noticeable slowdown when taking extreme close-ups. Again, this is far from unusual when using macro lenses. There is no autofocus range limiter switch, so the lens will likely hunt through the entire range in difficult conditions. Sharpness scores in our lab tests had a bit of a yo-yo effect through the aperture range, but, aided by in-camera firmware corrections, color fringing and distortion are non-issues

We perform a series of laboratory tests under controlled conditions, using the Imatest Master test suite. Photographs of test cards are taken over the range of apertures and zooms (where available), and then analyzed for sharpness, distortion and chromatic aberrations.

We use Imatest SFR (spatial frequency response) maps and analysis software to plot lens resolution at the center of the image frame, angles and center distances, across the range of aperture settings and, with zoom lenses, at four different focal points. The tests also measure distortion and color delineation (chromatic aberration).

Center sharpness bounced up and down in yo-yo fashion in our lab tests as we reduced the aperture in single f/stop increments from f/2.4 to f/11. There is a gradual drop from f/11 to f/22 due to diffraction. Levels of sharpness in the center area and towards the edges and corners were both very good and much more consistent throughout the aperture range.

There is virtually no color outlining anywhere in the frame from the center to the extreme edges and corners, at all apertures.

It practically behaves like a zero-distortion lens. As with color delineation, automatic in-camera corrections flatter the results, which are increasingly common in the mirrorless domain.

This dual-purpose Fujinon lens works well for portraits as well as for extreme close-ups. With an effective focal length of 90mm and a fairly fast f/2.4 aperture rating, it’s probably better for the former than the latter, as maximum macro magnification at the closest focus distance of around 10.5 inches is only 0.5x, compared to the full 1.0x of most macro prime lenses. The inner barrel also stretches as you reduce the focus distance from infinity, eating into your working distance for macro shooting.