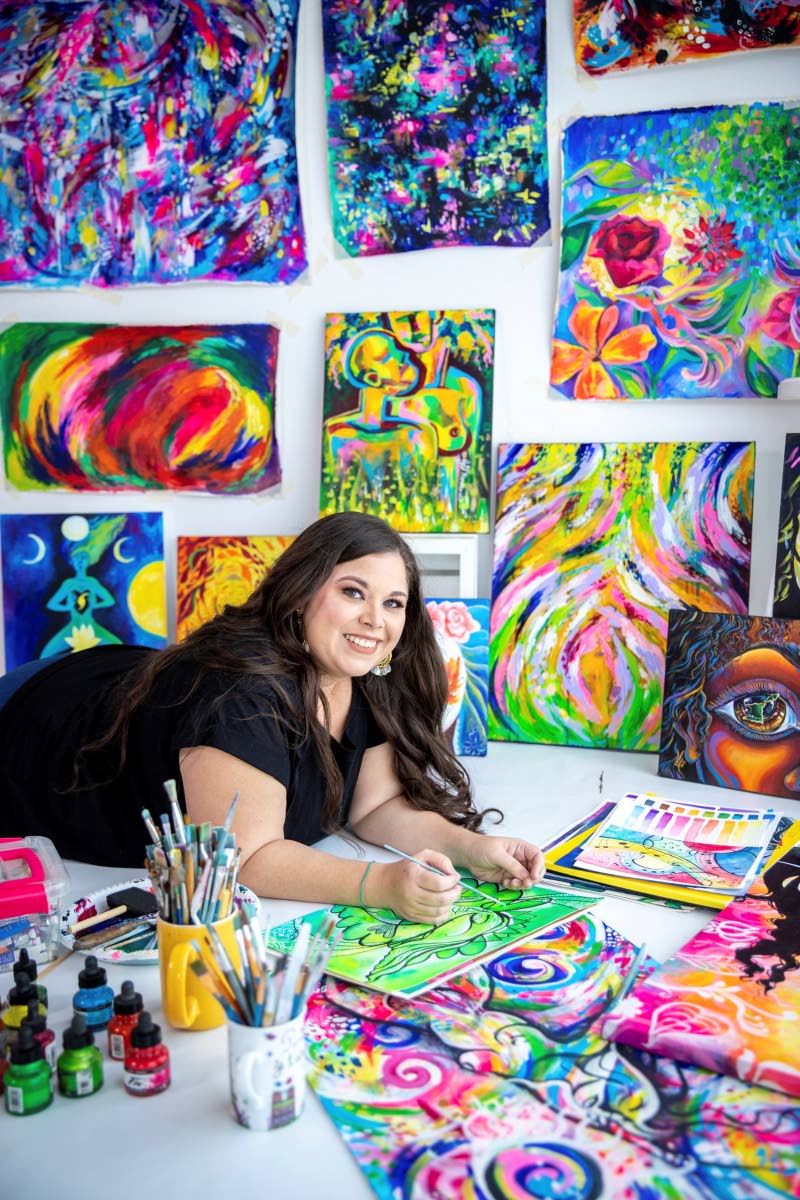 The need for perfection and to control every detail of the creative process can be exhausting for an artist – something that visual artist Gabriella D’Abreau understands all too well.

After presenting her first solo exhibition, Herstory, at the Art Society in 2012, followed by group exhibitions between 2013 and 2015, the artist found herself with a severe case of artist’s block that lasted for five years.

Ironically, she found the antidote in the shutdown caused by the restrictions of the covid19 pandemic that paralyzed the world for more than two years.

“Before my block, I got overzealous. After Herstory ten years ago, I did three group shows in 2013, one early in the year, one in the middle and one at the end. By the end of 2013 I was wiped out, and in 2015 I did a group show with about five other artists. I organized and put together the show.

“It really took a toll and I lost my passion for creating. That’s when I realized I had to back off. I still created, but it was sporadic.”

During that five-year period, she put her time and energy into graphic design, a self-taught skill, as well as teaching art workshops and coaching other aspiring artists.

And then the world shut down! With a slowdown in demand for the work of graphic designers and her inability to offer in-person workshops, D’Abreau told WMN she instinctively found her way back to her love of painting, and this time the process took the given freedom to tell his own story. story.

“I started creating again, without intention and control, focusing on enjoying the process of painting. Over time I started to create more and more, and some time, maybe in the middle of last year, I approached a gallery to put the work in a show. I just wanted to share my work in person, apart from what I posted on social media, because artwork is so different when you see it in real life.”

D’Abreau’s second solo show, The Art of Surrender, will be held at Arnim’s Art Galleria, Port of Spain. The pieces, she said, are the result of surrendering to her need to control what she feels she wants the end result to be.

“The more I let go and the more I released my need for control in the creative process, the easier it became to create, and the more joy I began to experience… When we are the one who controls everything, can we miss opportunities that might come along and we don’t notice them because of preconceived notions… I see this exhibition as a homecoming to my authentic self.”

This work, she told WMN, is unlike any she has created before. Allowing the free flow of her creativity, each piece tells its own story in its own voice through her use of bright, bold neons and highly saturated colors contrasted with deep reds, purples and blues, and her combination of “dramatic color , texture and movement across diverse abstract, figurative works and even surrealist pieces. In this collection, it feels as if time stands still, as if existence is suspended in a fleeting moment of happiness… I enjoyed working on this one more than my first solo exhibition.”

She said she works primarily with acrylic paint, but sometimes with watercolor and mixed media, and includes combinations of abstract, surreal and figurative pieces.

A Holy Name Convent, Port of Spain and St John’s University, New York alumna she holds a Bachelor of Fine Arts in Illustration. But, she said, while she’s always been creative and interested in art, she can’t pinpoint the specific moment she knew it would become her life’s work.

“Before I discovered acrylic paint, I was more into drawing. The painting probably happened in high school.

“I can appreciate fashion design, but can’t say I want to do it now. Illustrated children’s books may still be there, but not at the forefront. In addition to painting, my focus now is to help adults, especially women, to get back in touch with creative sides by doing more workshops. Most times people find me, so I take that as a hint that this is what I should do now.”

The mother of one said she had no idea where her work would take her and she had no “big plans” to translate it into money, but she was going with the flow and enjoying it. She is especially looking forward to The Art of Surrender and getting involved with the people who come to see her work.

“What I like most about exhibiting is interacting with and getting people’s interpretation of my work. You can’t get that kind of engagement on social media.”

“It’s the first time I’ve done this and I’m very excited because it will allow me to have a conversation with my audience.”

Earlier that same day, between 10 and 11 am, customers will be invited to do a collaborative painting in a fun session.

For more information or to RSVP: email: [email protected]

To learn more about the artist: