Getting the shot: A photographer’s perspective on Wes Moore’s inauguration 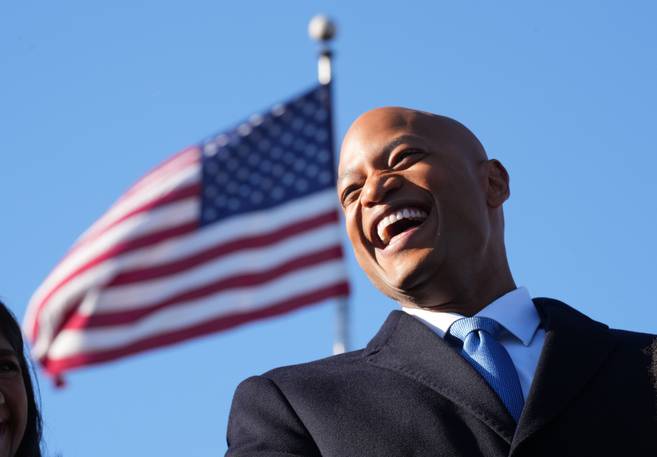 Major political events such as inaugurations are typically chaos. No matter how much planning, credibility or organizing the communications teams do, something will always go off track. As a photojournalist, it is important to be able to find peace within that chaos to focus and see the day unfold in a unique way. You learn this the more often you photograph these things.

The inauguration of Maryland Governor Wes Moore was a long day. One of the first events was Moore’s visit to the Kunta Kinte-Alex Haley Memorial at the City Dock in Annapolis. In the past, this place was where slaves were sold and traded in the colonial city. Moore and Lt. Gov. Aruna Miller laid a wreath at the memorial statue of author Alex Haley, who wrote a novel based on his family history, “Roots: The Saga of an American Family,” about a young man, Kunta Kinte, who was enslaved and brought to “Naplis”. There was no shortage of symbolism in Moore’s presence at the site — the state’s first Black governor acknowledging the historic significance of his election in a country built by enslaved laborers.

Photographing it was quite difficult. It was an intimate moment with a small group of attendees, so I didn’t want to be pushy or draw attention to myself, which I am especially wary of during sensitive situations. A photojournalist is a fly on the wall. The event was supposed to have limited media, but there were a decent amount of cameras there and movement was very, very limited, if not impossible. I chose to sit in the front on the ground so I didn’t block the view of participants – as many other photographers did. I’m 6 feet tall, so standing up was out of the question. How was I supposed to make unique frames without moving my body next to 10 other photojournalists in the same place?

This is where the light, point of view and composition come into play. With politicians, I’m always looking for a unique point of view that isn’t just a straight shot. When it’s someone speaking at a podium, the frames can get repetitive. It is important to look for small moments that stand out. It requires a lot of patience and good reflexes, because these moments are just that — moments. They happen sporadically, and seeing them is when the training and experience come in.

The lighting was quite harsh – lots of contrast with the shadows over faces – and the way people were positioned didn’t help. There was a flagpole with the American flag high in the air that was a few yards behind Moore. I was wondering if I would be able to get it in the background of my frame. Based on my position, I knew I could most likely do this by getting as low to the ground as possible and shooting upwards with my long lens. I didn’t want the flag to be in focus and visually compete with Moore, so I opened up my aperture and blurred it out. Using a long lens adds compression to an image and makes things far away look closer than they are.

I got the frame, but the light wasn’t in my favor – I needed Moore to turn his head to the left instead of the right. All I could do was wait. Like I said, I’m 6 feet tall, so being twisted on the ground, waiting for the exact moment he turns his face to the light was NOT comfortable, but it paid off because he . The luck of the photojournalism gods was bestowed upon me, and the wind also picked up and blew the flag out behind him. I’m not sure if anyone else got that shot, but I didn’t see anyone else contorted like a pretzel either.

Another series of Inauguration Day frames that I want to shed some light on, pun intended, is that of Moore and his family walking from the City Dock to the State House. The light was quite bright and harsh as he and his family began to walk away from the wreath laying ceremony. There were also a ton of other photojournalists trying to get their own photos, all walking backwards up the hill. It’s as chaotic as it sounds. People stepped over each other and trampled. I knew I didn’t want to fight for my shot after sitting like a pretzel for over an hour, so I ran ahead and waited until they got to the shady part of the street. I saw some musicians playing music and I had a feeling that the family was going to stop and enjoy it.

At that moment I turned and saw Dawn Flythe Moore hugging her husband, his eyes closed, his face full of emotion. It was a very powerful and intense moment that did not go unnoticed. Their children, Mia and James, also broke down in tears. Their parents wiped their tears and hugged their children as music played. I took as many frames as I could without being intrusive. I didn’t need much to capture the power of the moment.

The human condition is what inspired me to become a photojournalist. Documenting happiness, sadness and everything in between is a privilege. Empathy, the ability to feel the emotions and put yourself in the shoes of your subjects, is a powerful tool. It changes the way you see and photograph. As journalists, we are trained to be disconnected in our reporting in an effort to combat bias. This is why so many of us are desensitized to things we cover. However, I don’t always agree with that point of view. You can be unbiased and still feel for people – their happiness and their pain. This is the foundation for powerful imagery.