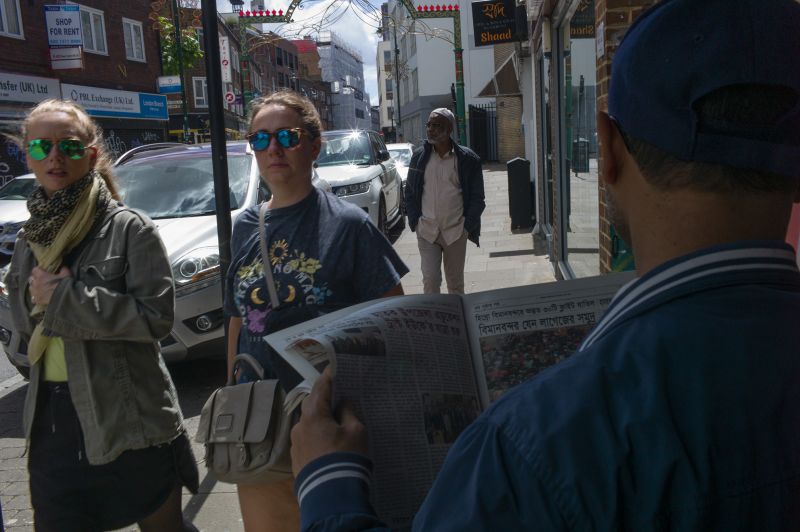 Each year, Photo News takes on a unique photography challenge in London. Photo 24 is sponsored by MPB, an online platform for second-hand photography and videography equipment, and sends participants out on a range of thematic challenges.

To increase excitement, they also challenge celebrity photographers to shoot in the capital throughout the 24-hour period. This year we were very excited because they chose one of our favorite creatives for the assignment.

Simon Wheatley is a London-based photographer and filmmaker best known for recording London’s grime culture. His 2010 book “Don’t Call Me Urban: The Time of Grime” is a classic of British documentary photography and is currently in the latest edition.

Other highlights of Simon’s career include working as a photographer for Magnum in Paris, producing groundbreaking works in the suburbs of France after the 2005 riots, and the Leica M-series cameras in 2006. Includes being elected as a global ambassador for. An in-house photographer at Abbey Road Studios in London.

Over the last decade, Simon has divided time between London and his maternal ancestral land, India. He conducts workshops around the world and develops photography courses that aim to combine physical, mental and spiritual development.

We talked to Simon about how he responded to the challenge in Photo 24, what he learned from his experience, and the kit he used to shoot the mammoth.

How did you approach the idea of ​​shooting 24 hours a day, non-stop?

Actually, I didn’t want to shoot 24 hours a day, because there was no way to do it and make a good work. So the way I interpreted the briefs was that I had 24 hours to carry out my mission. And I will take as much of that time as I need.

Which kit did you take?

I usually use the Leica M9 rangefinder, but for this project I also got a Fuji X Pro 3 from MPB. It was very smooth and easy to use.

MPB gave me a 50mm lens with X Pro 3. This is good for exploring the city. But once I find a theme, I want to get in there and get busy. At this point, you need a wide-angle lens to get closer. That’s why I used a 35mm lens for the M9.

Both were lightweight, so it was okay to use both cameras. The XT-3 weighs less than 0.5 kg. And I don’t have a tripod or anything like that. So I carried both cameras in a bag. You don’t know I was a photographer!

Of course, you also have the option of using my phone. The iPhone is very good now. You sometimes think: why bring your camera out anymore? But when I pick up the camera, I feel a little more serious. That means I’m thinking right to get the desired results. On the other hand, even if I have a cell phone camera, I don’t feel like I’m working on something interesting.

The talk that started the Photo 24 event was held in Piccadilly, central London. So my original plan was to simply take pictures in the area, such as nightlife, cafes, bars, etc. However, it was a little troublesome to listen to the story and walk around a little. I wasn’t thinking of making something unique and special.

So I changed my strategy. I thought, “Well, I’ll go to East London and take a picture.” Because this is the place where I can finally relax at this stage of my life. So I thought: “Go and celebrate it and let me take a picture of an interesting part of the city.”

I headed to Hackney’s Broadway Market … but it was very dull. Some people were bouncing around by second-hand clothes, checking themselves in their mirrors, and I tried to take some pictures there. But it wasn’t exciting at all.

It’s frustrating! So what happened next?

I left Hackney and went to Whitechapel Market. So when I returned to London in 2003, I started taking pictures of the Bangladeshi community and came across the first dirty picture. So my interest in this area goes back a long time ago.

I thought this mission could be an opportunity to rekindle my first foray into East London 20 years ago. I want to focus on something, so just wandering around and taking pictures can be a little daunting.

You need some theme or reason to be in a particular area.

Yes, that’s what I’ve always prospered. I remember being in Budapest, Hungary in the mid 90’s. The social turmoil caused by the sudden changes in economic models between communism and capitalism and the resulting polarization was numerous. So it was a fascinating place for me to start photography. Also, when I went to India around 2008-2010, it was interesting to see the tension between globalization and traditional Indian life in Kolkata. However, it is difficult to take a picture just by walking around somewhere without a comprehensive theme interest. Ultimately, I’m a storyteller.

What do you do when those storytelling moments don’t show up?

As I tell the students in the workshop, you have to stay there, even if it’s difficult. Not all games win with 5nil. Sometimes it’s a nasty game and you only win in the last moment, but you still win. And it’s the same with photos. You have to continue, and you have to get your results. You will not give up. And that’s why I just hung there. But it was really difficult because there are very busy streets. People are in and out of your camera.

Somehow the sun is there, then suddenly clouds come in, making a difference in exposure. It takes the highlights from the photographs that need it, because it is the light that ultimately produces the drama of photography.

When did things start to turn around?

In Whitechapel, I was upset about Mela [an Indian festival or fair] The suburbs of London that were held at a shopping mall. So I went over there. The scene that greeted me was completely surreal.

Bangladeshi hijacked this old department store. It’s a bit like Selfridges. The store has sections for various designers. For example, Tommy Hilfiger section or Gap section. All in Bangladesh. When I entered, it looked like Kolkata. People were selling coconuts and cutting them through with a knife. Various people lined up. It was a riot. It was great!

When I went upstairs, there was a model rickshaw. It was very sweet because the mothers were taking pictures of the children. And with so many recent arrivals from Bangladesh, you felt a real love for your homeland. At the same time, it was very sticky and turned out to be some interesting images.

Then I returned to East London and found some people I knew. They are young and positive young people, about 30 years old. So I went to hang out with them. A man is obsessed with his vintage BMW car, so he took two pictures hanging out in the garage. Then they took me to some bars. These illegal bars in East London are for private admission only and you cannot take pictures there. Sometimes they are at the forefront of the bigger ones.

After that, I found a way to the task, so I decided to call it night. Earlier, I was thinking of going to Hackney Wick and finding a crouching party all night long. So I made a few phone calls early in the day to find out what was happening. But that weekend was also Glastonbury, so many of the people I knew were absent. So I thought it would be better to go home, sleep for a few hours and then wake up at dawn.

Where did you go at that time?

At dawn, after 6am, I photographed a real estate property on the edge of Brick Lane. But at that time there was no one, so I took an architectural photo. I have always been very fascinated by the architecture of the 70’s. That’s how I came across grime music. I was filming real estate in southern London, so I just met people there and music was the local language of young people.

Finally, I went back intensely for the last hour trying to take a photo in Brick Lane. It wasn’t easy, but the results came out. Since then, I’ve been editing my photos and have a satisfying shared portfolio.

You haven’t done street snaps for about 10 years. Has anything changed?

Not so when it comes to people’s reactions. It has always been difficult. There was resistance even 10 to 20 years ago. So I don’t say it has changed that much.

But for myself, there have been major changes. When I was in China and India, I learned a lot about Taoism and the concept of the least resistant way. Since then, I’ve noticed myself taking pictures differently.

For example, there was a time this weekend when two Bangladeshi women were on the bench and didn’t want to take pictures. So I sat next to them and talked to them. Traveling is always my destination, so I didn’t have to take a picture.

If you come across someone who doesn’t want to take a picture, but isn’t seemingly hostile, you’ve learned to take advantage of that moment to pause the day. Sit next to them and just talk. They may not want to take pictures, but they can still talk to them. And they can be interesting people.

Now, when I was sitting and looking in the opposite direction, I found another photo. This guy sitting on a stump on a highway. So he was just sitting with this woman and she was able to explore the situation while talking.