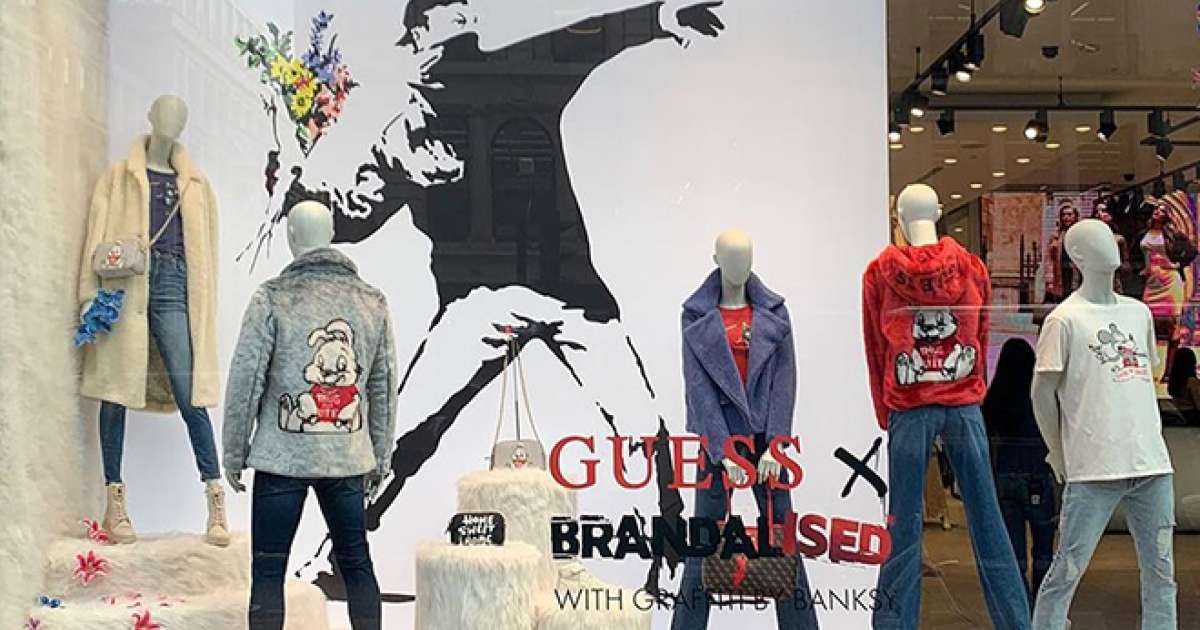 GUESS’ flagship Regent Street store recently launched a GUESS x Brandalised project capsule in mid-November featuring some of his work on the clothes – including the Flower thrower, Balloon girl and Follow your dreams.

However, the anonymous street artist claimed that GUESS did not ask for permission to use his works.

In a recent post on his Instagram page, for which he has 11.8 million followers, he wrote: “Attention all shoplifters please go to GUESS on Regent Street.

Read this next: The 5 most controversial Banksy moments of the decade

“They helped themselves to my artwork without asking, how could it be wrong for you to do the same to their clothes?” he continued.

In a press release about the collection, the American brand said: “Using iconic motifs from Banksy’s graffiti, this collection combines the artist’s graffiti with GUESS attitude.”

GUESS Chief Creative Officer Paul Marciano said: “The graffiti of Banksy has had a phenomenal influence that resonates throughout popular culture.

“This new capsule collection with Brandalised is a way for fashion to show its gratitude,” he continued.

Read it next: Banksy made honorary professor at UCA in recognition of humanitarian efforts

Brandalised posted in response to Banksy on Instagram, quoting something Banksy had previously said in 2012. It read: “Any graffiti [changed from advertisement] in a public space that gives you no choice whether you see it or not is yours. It belongs to you. It’s yours to take, rearrange and reuse.

“Asking permission is like asking to hold a rock someone just threw at your head,” it continued.

Mix power has reached out to GUESS for comment.