Hong Kong Palace Museum: How to celebrate Lunar New Year like an Emperor 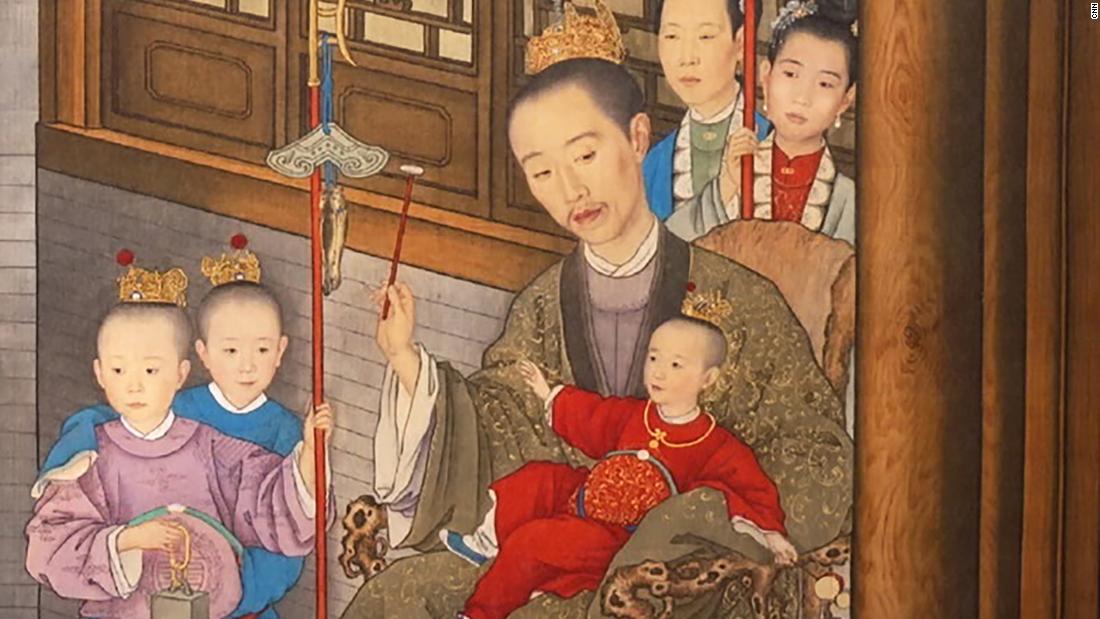 It’s Lunar New Year. Dressed in their best festive clothes, an 18th-century family sits down to feast on a sumptuous banquet in a room decorated with auspicious signs.

This scene will sound familiar to many of the families, across China and the world, who enjoy their own festivities, traditions and symbolic foods over the holiday period, which began on Sunday. But there are some significant differences: This hotpot dish is ornately decorated in cloisonné enamel, the signs are covered in turquoise, jade and rubies, and the patriarch’s fashion choice is a silk robe with dragon motifs hand-stitched in gold thread . It is a lunar new year fit for an emperor.

“It’s a symphony of the senses,” said Daisy Wang, deputy director of the Hong Kong Palace Museum, where these Qing Dynasty-era treasures are on display in a second-floor gallery focused on the daily life in Beijing’s imperial palace.

The $450 million building opened last summer and has a rotating collection of more than 900 treasures on loan from Beijing’s Forbidden City, from rare ceramics to delicate scroll paintings. The museum celebrates its first Lunar New Year by inviting visitors to see how one of China’s longest-reigning emperors celebrated the occasion, through the auspicious objects on display.

The Qing Dynasty’s fourth emperor, the Qianlong Emperor, was “one of the most powerful rulers on earth in the 18th century,” Wang said. “He ruled over a vast area, with a population of probably more than 300 million.”

His reign, from 1735 to 1796, was also characterized by flourishing art and creativity in the country. Known to be learned and cultured, he published more than 40,000 poems during his lifetime, and amassed an enormous collection of ancient and commissioned imperial works of art during his six-decade rule.

Everywhere you look in the Palace Museum exhibit, the emperor’s penchant for luxury is on display, from hanging panels with jade floral motifs to a few gold gourd decorations. The latter, embedded with semi-precious stones and bearing the Chinese characters for “great fortune”, is among more than 60 gourd-shaped decorations commissioned by the Qianlong Emperor to decorate the Forbidden City during the Spring Festival in 1746 alone.

As with many works of art, it contains “hidden meanings,” Wang said. A symbol of fertility, bottle gourds, or “hulu,” have a name that sounds similar to the Chinese words for “prosperous” and “wealth,” she added.

However, the emperor didn’t just commission works of art: His extravagant taste extended to his wardrobe. “(He) never commissioned (just) a single garment,” Wang said. “It always had to be two, four, six.”

Known to change his outfit up to seven times a day, one standout piece of clothing on display in the exhibition is a robe adorned with intricately hand-stitched dragons flying between bouncing, clouds in gold-wrapped thread.

This royal dragon robe was one of the Qianlong Emperor’s finest ceremonial robes. Credit: CNN

With a taste for large banquets, often consisting of hot pot, dumplings and roast duck, the emperor’s eating habits – and the serving dishes and utensils used – will be familiar to many. According to Wang, Qianlong loved hotpot so much that he ate 200 such meals in one year, which some say contributed to his longevity (he died in his late eighties).

New Moon Festivals were particularly special for the Emperor because it would be one of the few occasions he could eat in the same room as family and friends. “Due to security concerns, he usually ate alone,” Wang said.

An extravagant hot pot used by the Qianlong Emperor. Although it is beautifully decorated using the cloisonné technique, the copper inside makes it completely functional. Credit: CNN

The imperial items he used, in addition to being gilded and bejeweled, also reveal how many traditions have remained the same.

“One of the things that surprised me is how similar the way he celebrated the Lunar New Year is to our practice today.

“I hope that visitors will come to connect these ancient objects with their own lives.”

Watch the video above for an inside look at the Lunar New Year objects on display at the Hong Kong Palace Museum.