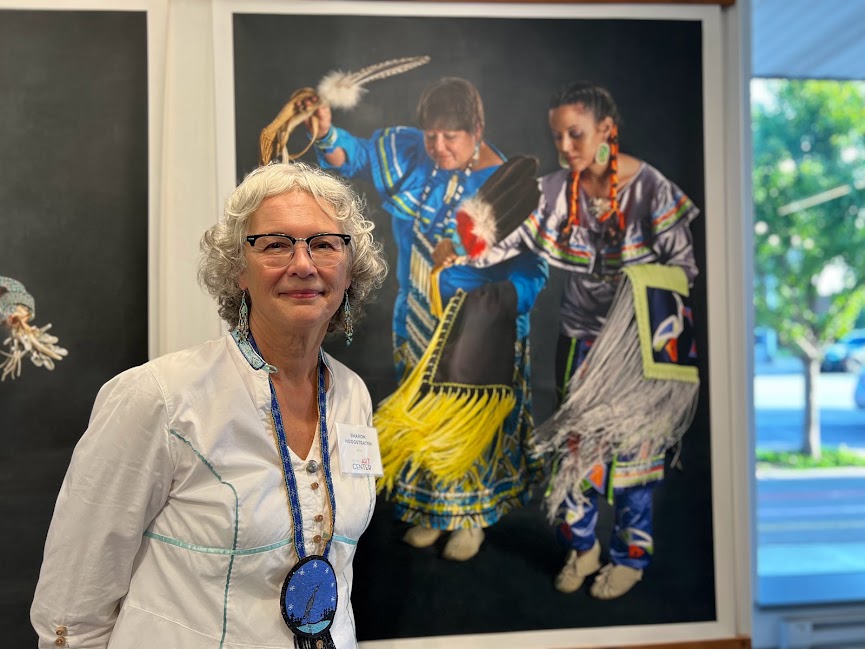 Photography is a vessel for cultural preservation for Sharon Hoogstraten, giving dignity and visibility to an indigenous community that has often been unable to control its own image, she said.

Hoogstraten, a member of the Citizen Potawatomi Nation and a Chicago resident, began a photography project more than 10 years ago, documenting modern Potawatomi people dressed in formal regalia.

Hoogstraten’s high resolution images, the product of a Hasselblad camera, are blown up to life size for display at galleries. “Dancing for our Tribe: Potawatomi Tradition in the New Millenium,” her most recent exhibit, curated by Evanston artist Fran Joy. The exhibition has been on view since July 30, featured an artist talk on Friday, and runs until August 28.

About 30 people attended the opening, where Hoogstraten described her photographic process and the journey that led her to document her people.

“I want to preserve a culture, send it to our descendants, (and I want) to let everyone know we are here,” said Hoogstraten. “Everyone thinks it’s a disappearing culture. We worked very hard to learn the old art skills to work on language preservation before you lose the elders.”

Wilmette resident Audrey Moy said she was already aware of Hoogstraten’s work, but was particularly impressed by the collection on display at the opening. She said she likes the cultural stories Hoogstraten’s photos tell.

Moy said photographing modern indigenous life is a way to acknowledge a culture that has been marginalized.

“She can capture images that will stick in our minds through time,” Moy said. “Again, it tells a story, and talks about where they’re going. So we are able to create it in our hearts and our minds.”

Joy first discovered Hoogstraten’s work at Evanston’s Mitchell Museum of the American Indian. She said she wanted people to feel a sense of the indigenous culture through the exhibition. Moy and Joy said they believe it is important to recognize indigenous land.

The large size of the photos was extraordinary, allowing for high resolution, something that is especially useful with the ornate and elaborate native regalia, according to Joy. In addition, cedar wood, an important Potawatomi medicinal herb, is used to hang the pictures.

“They’re quite large, almost life-size, and have a black background to show sort of movements, like they’re dancing,” Joy said. “And they’re very detailed and very colorful, quite striking.”

The title of the show and Hoogstraten’s photography book, “Dancing for our Tribe: Potawatomi Tradition in the New Millennium,” reflects the importance of dance in Potawatomi ceremony.

Dance is an essential form of cultural preservation for many indigenous groups, but Hoogstraten said it is essential for the Potawotami for historical reasons. The Potawatomi signed the most treaties with the American government of any tribe, meaning they were highly mobile and unable to use physical space to hold on to traditions.

“It was very difficult for us to hold on to our culture,” said Hoogstraten. “(Many of us were) shipped west of the Mississippi … basically deported. Holding on to a lot of tradition is therefore not something they take for granted.”

Hoogstraten’s photos, compiled in a book to be released at the end of August, are a way to lay down roots for her children and her family seven generations into the future, she said.

Hoogstraten asks all her subjects to write a handwritten description of their outfits in terms of the symbolism and what it means to them. Several such explanations were on view in the Evanston gallery.

Displayed in a small space at the front of the art center, the exhibition is part of a larger long-term commitment to diverse artists, and the third of four shows curated by Joy for this year.

At its heart, the show revolves around dignity, pride and conservation.

“I’m trying to put our place on the timeline,” Hoogstraten said. “I try to find the roots with my children.”