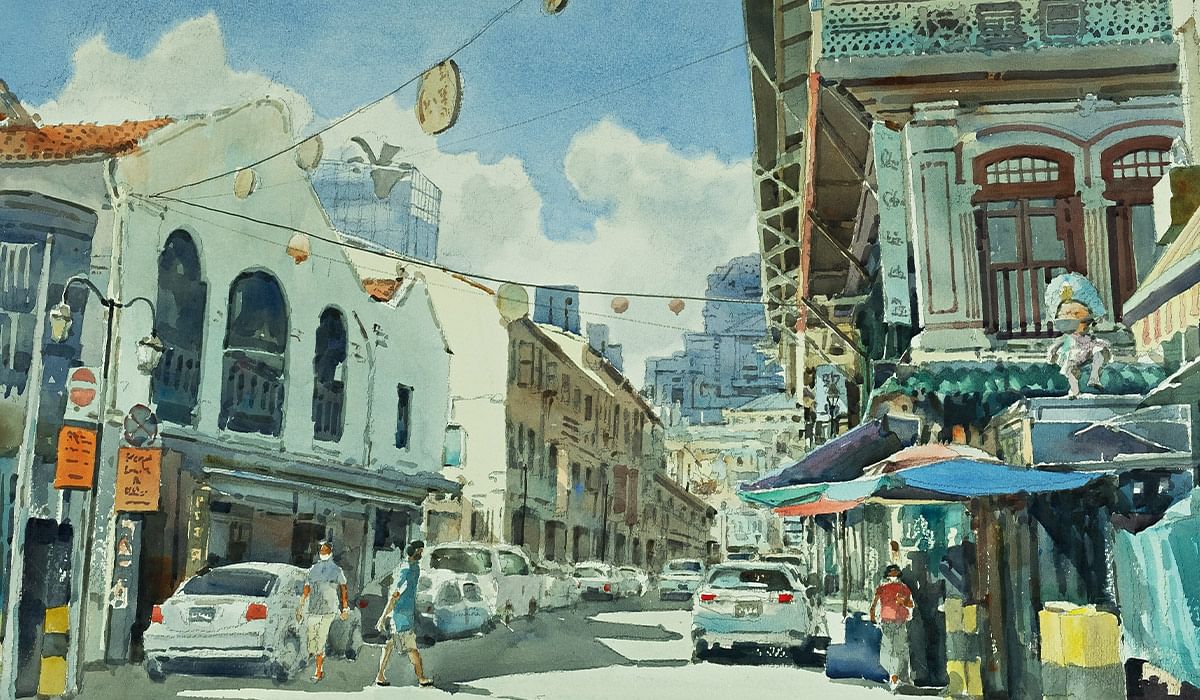 Ong Kim Seng is one of Singapore’s most recognizable artists. He is known for his fluid and vivid watercolor paintings of city scenes. Even with such a distinctive style – or because of it – Ong has a strong commitment to authenticity in his work.

“I had agents from all over the world calling me to verify my paintings,” says Ong. “When a famous painter friend saw someone imitating his work, it got me thinking.”

When Ong found out from his children about Web3 and technology such as non-fungible tokens (NFT), Ong became interested in it. Since Web 3 stores digital data in a blockchain, he can preserve his art while protecting his legacy.

He recently teamed up with VaultV to create NFTs of some of his paintings available at Web3 Marketplace Opensea. VaultV is a blockchain-based project run by the technology company OTECH. The NFTs function as a digital certificate of authenticity and the physical artwork can also be used by buyers.

“The proof of authenticity will remain valid over time. This is due to the immutability of encrypted blockchain transaction records and the digital signature for each artwork.

Ong is not the only artist enhancing his legacy with Web3 technology. Due to the NFT boom last year, more artists are now dabbling in digital art. Yes, even those known for their physical works of art.

Goh Beng Kwan is another recipient of the Cultural Medallion. He has also explored the world of augmented reality (AR), virtual reality and NFTs. In January, he minted animated NFTs for the National Gallery Singapore’s fundraiser based on his original works.

In May, for his 85th birthday retrospective at the Conrad Centennial Singapore, Goh had 11 AR works virtually installed for his exhibition. The ArtAF app also enabled visitors to virtually “exhibit” 85 of his artworks from the show in their homes. This allowed visitors to get an idea of ​​how his art would look on their walls.

Known for his abstract, mixed media creations, he intends to continue to explore Web3 as a way to spark creativity. “In the past, the artworks were all static. Now it is very interesting to see how parts of the artwork come alive and in motion. Adding sound to the NFTs also adds another dimension to the artwork. This was not possible before,” he says.

Extending the legacy of works of art through Web3

Having his work accessible to younger audiences will allow him to expand his legacy. Goh’s daughter Hazeleen founded the ArtAF (Art Affairs) platform last year to help promote her father’s work. The platform also helps other senior artists gain publicity by connecting them with young art collectors.

“Artwork on Web3 enables established artists to easily and instantly showcase their work to a younger audience. This saves time as more artworks can be viewed. Younger audiences can better understand the artist and his creations even before they see the art itself,” says the younger Goh.

“Web3 may also reach a wider and international audience.”

Goh, like Ong, believes authentication technology is a reliable way to protect her father’s hard-earned artistic legacy. To do this, ArtAF uses an open and closed QR code system.

“Over the years we have seen many examples where an artist dies, and the authenticity of the artwork becomes questionable as soon as there are forgeries. Digital technology can mitigate disputes that may arise when an artist is no longer around to provide assurance of authenticity,” she explains.

Furthermore, she hopes that her father will continue to draw inspiration from digital technology in his twilight years. He spent his life experimenting with different media and materials. She says: “Gaining an understanding and insights into the new technology and world the young generation lives in will influence how he expresses himself in his artwork and give him a different perspective when it comes to the create his art.”

Not surprisingly, younger digital natives are exploring the Web3 space to expand their artistic horizons. These artists even include those whose work is traditionally known for its physicality.

Multidisciplinary artist Andy Yang was excited about the opportunity to push his creative boundaries. His NFTs are available for sale under online art gallery The Artling’s NFT category. “By extending my exploration into the digital domain, I was able to explore ideas and techniques that would be impossible or very laborious to achieve in the physical realm,” he says.

The “unprecedented boom” in the community of creators around the world also allowed him to collaborate with two other artists, Yeo Shih Yun in Singapore and Alba Escayo in Spain on the Hola Mona NFT project, which led to the creation of a whopping 1,503 images.

“Having been full-time career artists for over two decades, the three of us took on the challenge and decided we could create profile pictures (PFPs) that looked much better,” he says.

Better traceability and accessibility of artworks through NFTs

Yang appreciates that NFTs make it possible to track who owns his artwork even after it has changed hands, while providing a much-needed revenue stream. Royalties from the resale of artworks help artists further finance their practice, he notes. “The smart contract also streamlines the management and agreements for collaborative projects, making artwork sales and the distribution of royalties much more transparent.”

Despite the current turmoil in the crypto world, artists like Farizwan Fajari, better known as Speak Cryptic, aim to stay in the space. The contemporary artist, who started out as a street artist and is known for his elaborate murals, began creating NFTs as a way to expand his practice.

“I have an art-first approach, so I try to keep showing up at places with good art, or what I think is good art. Being involved in the NFT space has expanded my audience,” he says. “Plus, I’ve made a few new friends since I started, so it’s pretty easy to stay.”

Currently, about a third of his current work is NFTs, with assignments, physical works and speeches and workshops making up the rest.

At the end of the day, the appeal of letting their work live on in a pristine form – unlike physical works that tend to decay with time – also plays a big role. Says Yang, “As an independent artist, the prospect of having NFTs of original artwork on the blockchain really helps to make sure that my archived artwork will always be available to be enjoyed even after I’m gone.” .”

Related: What Audrey Lim learned from working with Web 3.0