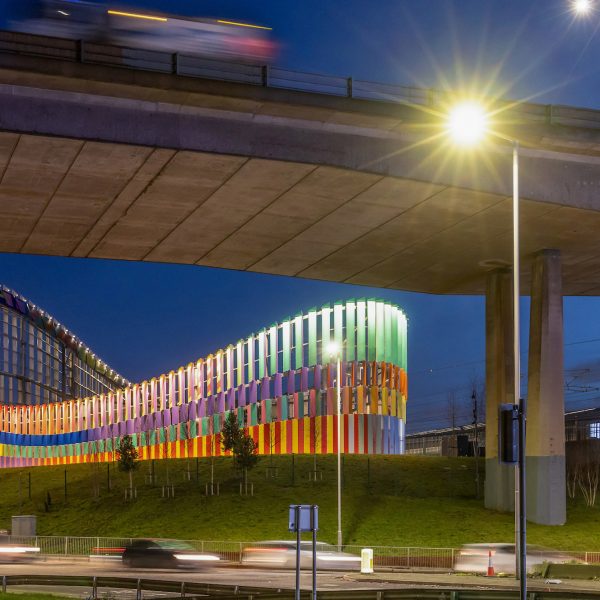 British architecture studio IF–DO and artist Lakwena have wrapped an electrical substation in Brent Cross, London, in an artwork informed by rotating billboards.

The colorful structure is designed to enclose a large electrical substation and become a landmark for the upcoming residential development called Brent Cross Town in North London.

“It’s a celebration,” IF–DO co-founder Sarah Castle told Dezeen. “It transforms utilitarian infrastructure into an important new landmark that celebrates the spirit of the local community.”

“The project provided an opportunity to create a landmark that would help define the identity of Brent Cross Town and celebrate the spirit of its residents.”

Built next to a large roundabout in the shadow of an elevated highway, the structure screens a large electrical substation and has large removable panels at ground level for access and installation.

Lakwena designed the colorful artwork and decorated it with the words “here we come, here we rise”. It aims to contrast the largely gray cityscape and reflect the movement of passing cars around it. 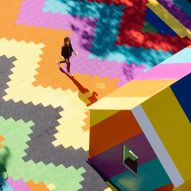 “My work historically tends to be quite two-dimensional, so what was really interesting to me in this space was creating an artwork that would be seen from so many different angles and at so many different speeds,” Lakwena told Dezeen .

“This became a very important aspect of the concept for us – that it should be able to be ‘read’ from so many angles and directions. Another consideration was to intervene in what is a very gray and concrete space, and to make something that disrupted that, but also in a way worked with the existing very industrial aesthetic.”

To create the impression of movement, IF_DO designed the structure to have a “kaleidoscopic effect” so that its appearance changes as people drive, or walk by.

“The kaleidoscopic effect was created with a lenticular facade, with panels that are triangular in cross-section and with each of the outward surfaces treated in a different color with a water-based, digitally printed coating,” explained Castle.

“The combination of the lenticular surface, undulating shape and changing light conditions, creates the kaleidoscopic effect as the viewer moves around the structure.”

According to Lakwena, this effect was brought about by the rotating billboards often seen along major roads.

“One very important early reference was those mechanical rotating billboards,” she said. “I’ve always loved the tactile nature of them. And I was very excited about the idea of ​​creating something that was animated.”

“But then we realized that the movement of the vehicles itself was enough to create the animation, and the structure could be static,” she continued.

“So we kind of reversed that reference and it became a lenticular facade, and we were able to play with these really beautiful color transitions that come to life as you move around the structure.”

The structure is one of the first completed elements of the Brent Cross Town development, which is being masterplanned by British studio Allies and Morrison and will see 6,700 homes built between Brent Cross and Brent Cross West stations.

IF_DO was founded in 2014 by Castle, Thomas Bryant and Al Scott. Previous projects by the studio include a “detachable and reusable” incubator for startups in London and a seaside retreat in Suffolk.