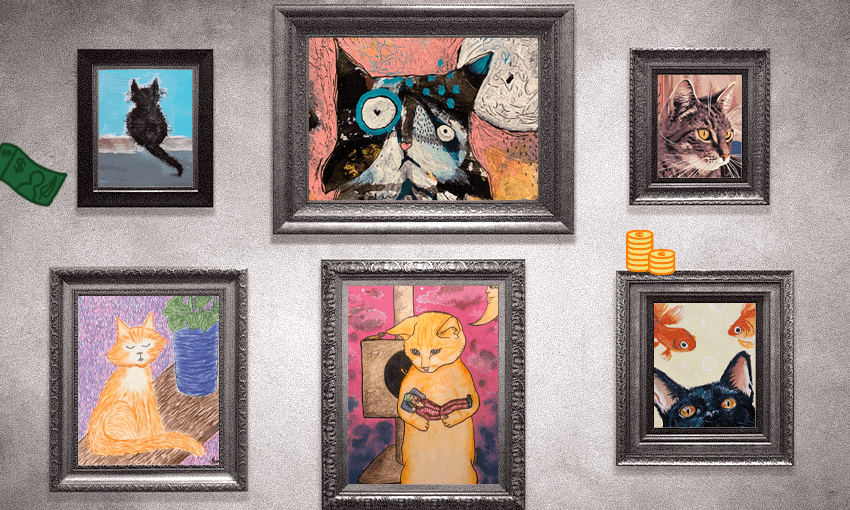 Famous artists such as Urzila Carlson and Tom Sainsbury rub shoulders with the professionals in the cat aloo of an auction set up to raise funds for Pet Refuge.

Inspiration came from a variety of sources at Caroline Moore’s cat art auction, which runs until the end of the month and has something for everyone, including paintings, watercolours, stone carvings, cross-stitches and photographs, all with a distinctly feline feel. All proceeds go to Pet Refuge, an animal shelter that provides safe, temporary housing for pets owned by those fleeing domestic abuse situations.

“I’ve never done anything like this,” says Moore, the owner of the online cat store Fang & Fur, who coughed up the idea like a furball during lockdown last year. It has since snowballed, with more than 40 artists and celebrities agreeing to donate works to be auctioned. “It developed into this great big event,” she says.

While some jobs are fun, like Eliza Guerrero’s portrait of Mimo staring longingly at two goldfish, others are more serious. Comedian Urzlia Carlson painted her cat Raven, who died nine years ago and loved to watch the world go by through the window. Michelle Yandle painted her cat Freddie Purrcury because, she says, black cats “are often the last to be adopted”.

Yvonne Todd, a photographer known for the 2006 work Goat Sluice, has provided a rare Polaroid outtake of that shoot that Moore believes will be among the most popular of the auctions. It already has a bid of $465, but could go much higher. “She’s known for doing these pictures that feel a little unnerving and a little supernatural,” says Moore. “She just printed it for the auction. It has the potential to go down.”

One artist in particular has a personal connection to the cause. “Growing up in a family with domestic violence, we often spent time in the Women’s Refuge but always went back home, and one reason was because our pets were still there,” says photographer Hayley Theyers, who has a beautiful contributed portrait of a fluffy woman. white cat turning away from the camera. “If there was a Pet Refuge, things might have been different.”

Pet Refuge founder Julie Chapman is grateful for the support and says they need all the help they can get. Since opening in 2018, the shelter has helped 165 pets and families escape abuse, with 115 returned to their owners. “Animal abuse is a tool used by abusers to assert and maintain power over victims,” ​​she says. “The incidence of this type of abuse has only increased.”

A live cat art auction will be held at Everybody’s in Auckland on August 28, with silent and live auctions taking place, allowing final bidding to take place. Moore says she hopes to raise more than $6,000 for the cause. “It’s a real barrier for women to escape violence,” she says. “Threats to hurt the animal can be used as a weapon. It’s so wonderful to help animals and their people.”

View the cat aloo and bid on your favorite cat art here, and register for the live auction event here.