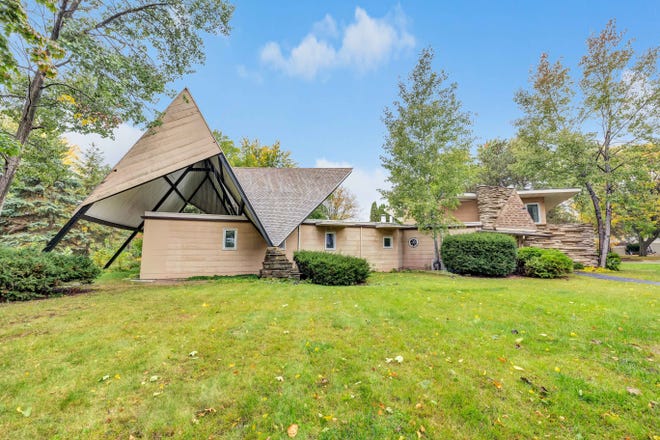 ALLOUEZ – Since the 1960s, the Ottum house has turned heads in the Green Bay area. In November, the Internet found out why.

You understand why when you see it for the first time. An angular, parabolic roof juts out from one side of the 4,300-square-foot home, almost requiring a double takedown. Then there are the “Fond du Lac shore rock” exterior walls that hint at what awaits inside the five-bedroom, four-bath home built in 1963, which exemplifies mid-century modern style. There is shag carpet, stonework, a built-in lounge, the dining table with built-in lazy Susan, and original fixtures and wood paneling throughout.

The custom home at 3200 Waubenoor Drive has drawn Green Bay-area residents to the eastside neighborhood for a low-speed look since it was first built. A global audience got the chance to bask in all its unique glory when Zillow Gone Wild—a social media brand curated by BuzzFeed’s Samir Mezrahi that highlights interesting homes for sale on real estate site Zillow—listed the property with its 1.2 million Facebook followers shared on Nov 23.

As of December 2, the post has received more than 8,400 reactions, 3,200 comments and 2,100 shares. The comments, as one would expect on Facebook, cover a range of opinions and include numerous suggestions about what should and shouldn’t be done to the house. Some missed the “nautical theme” in the structure’s design, others debated how mid-century modern it was, several got a “The Brady Bunch” vibe from the pictures. Some gave a hard pass; others considered it perfect.

Commentators debated whether the character and style were worth moving to the Green Bay area, although winter was an oft-cited obstacle. Local residents, some of whom toured the home, shared more photos and bits of the home’s history with his newfound audience. Overall, though, many people have found at least something to enjoy about the “time capsule” of a mid-century modern home.

Mary Sandoval, a realtor with Shorewest who listed the property, said the interest on social media led to many emails and more requests to tour the home. She said the current owner reduced the sale price by $10,000 to $365,000 to take advantage of the attention.

“We always say there are cookie-cutter houses and then there’s this. It totally has character to it,” Sandoval said.

But Sandoval also said the online attention has added to an ever-growing pool of memories and stories about the Ottum house. Neighbors stopped by during open houses to tell Sandoval their memories of the house. Research and information from commenters yielded more accurate information about the house’s history, such as when it was built (not 1958, but 1964).

The more she heard, the more special the already unique property became. So Sandoval and Carri Busse, another Shorewest Realtor and fan of mid-century modern style, went looking for any history they could find about the house, finding details in Green Bay Press-Gazette archives to local stories and online to complement comments. It all feels like it has the makings of a book, Sandoval said.

Dr. John and Margaret Ottum made a splash at the corner of Waubenoor Drive and Auburn Street almost as soon as the 28-foot steel canopy went up for the triangular, dimly lit roof.

The Ottums broke ground on their custom home in April 1963. John, an ophthalmologist in Green Bay, and Margaret commissioned Shiocton architect Learned M. McCreedy to design the exterior. The Ottums helped design the interior to meet their family’s needs: One wing of the first floor had rooms and spaces for their children, another wing was for common areas such as the kitchen and living room, and the second floor is described as an owner’s suite. .

The Ottum family and their unique home were profiled by Ginnie Erdmann in the “Women’s Features” section of the Sept. 27 issue. 1964 edition of the Press-Gazette appears, about five months after the family moved in.

In May 1966, the home would be featured in the Service League of Green Bay’s Parade of Homes II, which was organized to support children’s programs in Brown County. A photo of the Ottums’ sons in the living and dining rooms ran with the Parade of Homes announcement, and it survives today in the Neville Public Museum’s photo archives.

The Ottums seemed to enjoy the theories neighbors and passersby came up with to explain the design, saying “people seem to appreciate something boldly different.” They also took the extra attention that came with the head-turning house in stride. Friends would arrive with a housewarming gift in hopes of getting a tour as a steady stream of pedestrians and motorists found their way to Waubenoor Drive. Some of the attention, today, sounds more than a little cringe–they mentioned strangers knocking on the front door asking for a tour.

The Ottums provided answers to some common questions and observations from local residents and comments on social media.

The parabolic roof carried function more than anything. The roof design prevented Green Bay snow from accumulating on the lower, flat roof. A street-level look at the house shows the roof channels rain and snow straight into a garden bed. The shape also created a shaded porch or seating area, which the Ottums say was a popular party spot that stayed cool on hot, summer days.

The funky cupola above the main entrance is just a design element, though the Ottums told the Press-Gazette neighbors that it’s an aviary or clock tower.

As for the home’s design, the Ottums don’t say they were inspired by the design of a ship or that they wanted a nautical theme. Archival coverage suggests they asked McCreedy to create for them “a contemporary house of wood and stone that would be different.”

But even then, long before social media, the Ottum house drew a crowd.

“There is hardly a soul in town who has not hopped into the family wagon and driven by very slowly at least once … and in some curious cases, at least once a week,” Erdmann wrote in 1964 . One neighbor told Erdmann ordered their children not to ride bikes on weekends because of the distracted drivers; another noted that a parade of cars began at 8 a.m. and continued past sunset.

More unique, more of a challenge

The more unique a home is, the smaller the potential pool of buyers tends to be, which can make it more of a challenge to sell when it does come on the market.

That was the case when the Ottum home went up for sale in November 1985 for $149,500 in an ad that highlighted the sunken living room, Fond du Lac coastal stone and some cash for decoration, according to Press-Gazette archives. By March 1986, the price had dropped to $120,000.

The current price, $365,000, is in line with nearby, current home values ​​in Allouez as well as properties of comparable size, Sandoval said. It also puts it in a segment of the housing market — existing homes at $350,000 to $500,000 — where demand is high and available inventory remains low. In October, the inventory of homes for sale in that price range could meet statewide market demand for 3.1 months, according to the Wisconsin Realtors Association, well below the six months of inventory that represents a balanced or healthy housing market.

Interest increased with the newfound wave of social media attention, but the property received few offers. Sandoval, the home’s listing agent, said she understands the home won’t appeal to every house hunter out there. Plus, she said it’s a big house that will probably need some updates and modernization.

“It’s a big project for anybody coming in if they want to update that house because of the square footage,” Sandoval said. “It’s not going to be for everyone.”

Still, she said after learning so much about the property’s history and design, it’s hard not to hope the property retains its mid-century modern design elements inside and out.

“I hope it stays the same style,” Sandoval said. “I hope whoever comes in doesn’t change that much.”

‘As welcoming as the shadow under a tree’: the new home for the man who built Houston | Architecture