A place where reality and fantasy meet

Animals, especially fish, have always been the target of Korean attraction Artist Choi Min Yong. Hee-seop Choi, who grew up in Daejeon, remembers the National Geographic that made his dream come true and the aquarium of his parents’ house that inspired his imagination. After spending his childhood drawing and painting, Choi wanted to work in the creative realm and pursued his dream with a master’s degree in painting from both Seoul National University and UCL.

Choi, who currently lives and works in London, has become known for his dreamy watercolors and oil paintings, where surreal moments and real memories are intertwined. In recent years, it has been the artist’s aquarium and fish bowl paintings that struck a particular code, how nature in modern life, inviting viewers to escape to the miniature world of the world. The theme is prisoners of war that reflect what you experience.

with this interview In the designboom, Hee-seop Choi details her inspiration, her process, and what she wants to express in her paintings. Read the entire conversation below.

All images provided by minyoungchoi

Designboom (DB): Please tell us about the pictures of the aquarium. Why did you choose fish as your subject?

minyoung choi (MC): I have been fascinated by animals since I was young. I’ve always been watching National Geographic and dreamed of seeing all kinds of creatures in real life. Not surprisingly, I grew up with small creatures around me as pets (not always). The first animal I sympathized with was fish. I remember goldfish swimming in a large ceramic bowl on my family’s balcony and a large glass aquarium for tropical fish in my living room. The neighborhood of Daejeon, my hometown, was called “Eun” which means “fish are hiding”. There are literally fish hidden in my town, and when I was a kid I think the whole place was underwater. It used to be the sea, so I remember saying that there was a shell on the mountain next door. For many trivial reasons, I felt somehow part of the fish, as I am one of them, because the fish are particularly familiar to me and my constellation is already the constellation. .. When drawing a large anthropomorphic fish, I sympathize with them very much and feel that they represent one aspect of me.

The aquarium itself is also a fascinating theme for me. A glass box that traps nature. I love how the world is arranged in a trapped glass box. It’s a whole world for fish and a small universe for me. It reminds me of the boundaries of the world I belong to.

While living in a big city, seeing fish as pets in glass bottles and aquariums was more common to me than in the ocean, a natural habitat. I think this idea of ​​POWs completely reflects the way of interaction and perception with “nature” in the modern world. Eventually it will be a little gradual. I think that tension is created by the coexistence of living things and inanimate objects in the painting with the same image. 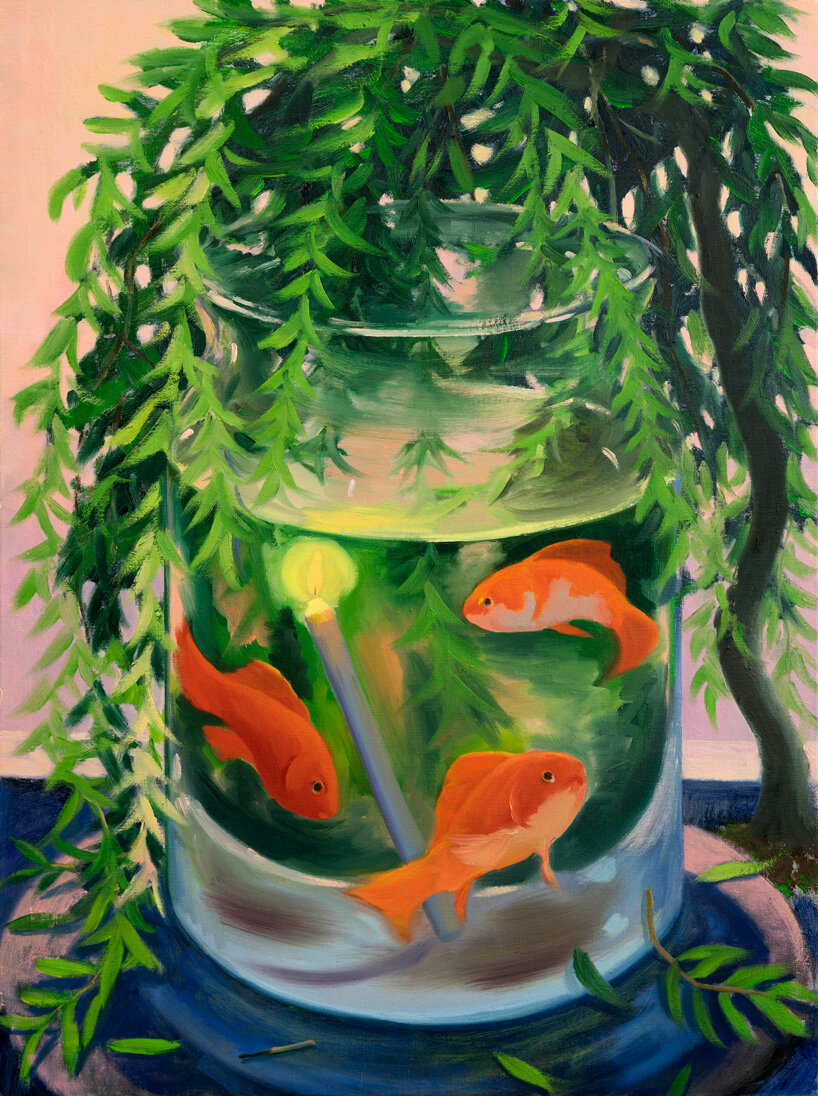 DB: In 2020, at the height of the COVID-19 pandemic, you created works such as “Bus,” “Goldfish,” and “Sunset.” Were these works intentional comments about the blockade, or were they just a form of artistic escapism?

MC: None of my work was intentionally created in connection with a pandemic or blockade.

I was able to divide almost one year from the year when the picture was drawn. I remember making a “bath” just before the pandemic. The idea behind the painting was that yellow fish were bathing in a temporary box while his original house was being cleaned. I remember the aquarium was washed when I was a kid. “Goldfish” may have been completed, but “Goldfish 2” remains unfinished.

During the blockade, I developed my routine to work from a watercolor-making house. Not surprisingly, I was fascinated by visualizing the water in the aquarium with a water-based medium, so I drew more pictures of the aquarium. I began to incorporate the vivid colors of the sunset that permeated the aquarium and space into my work. I was used to using shades of blue / green for my work, but I also wanted to expand the range of colors I could use. This is the birth of the “Sunset” series. 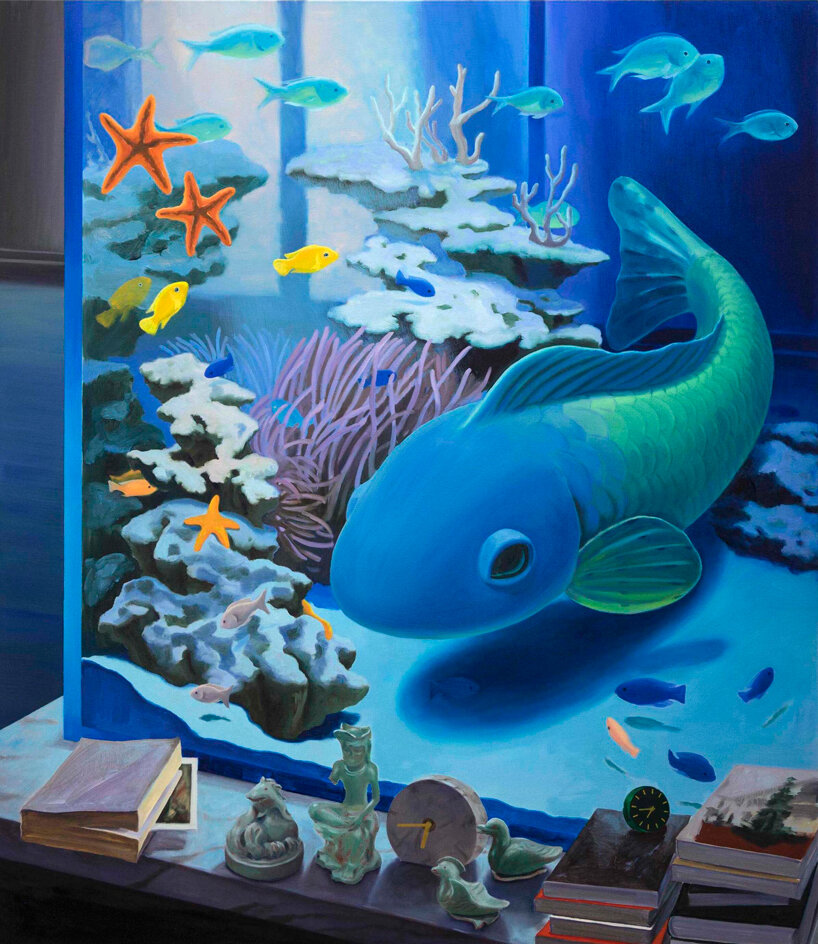 MC (continued): Back in the studio that summer, after the blockade, I continued to expand my aquarium ideas with oil paints.

At that time, “Goldfish 2” was finally completed, and “Aquarium”, which is an extension of the watercolor painting of “Sunset”, was also created. By the time I was completely back in the studio, I was able to take my work in a new direction.

I didn’t necessarily associate the pandemic with my painting. I was more interested in this subject as a way to bring elements of nature into the domestic environment. It is a visualization of the world within the world. The viewer first began to associate my painting with the blockade and eventually felt the pressure of confinement reflected in my work. After that, I also moved to drawing creatures in an open space. These paintings will look different years after the pandemic, and probably have nothing to do with health-related isolation. 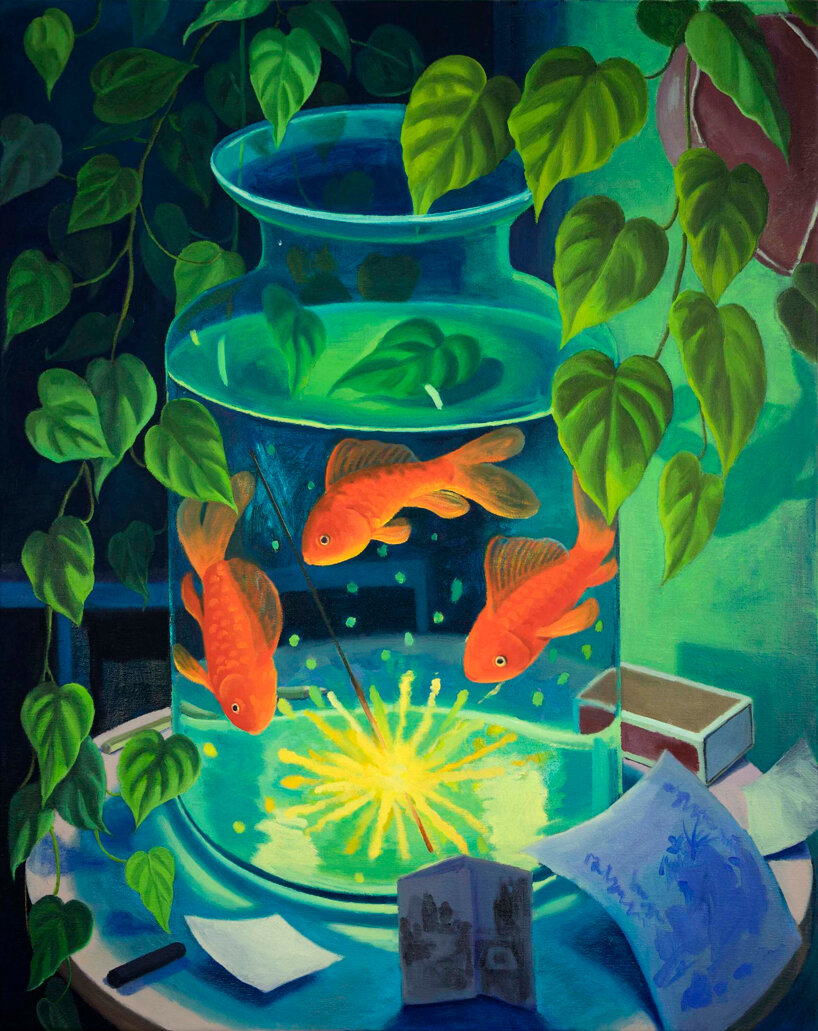 DB: What kind of emotions and sensations do you want your work to express to your viewers?

MC: The finished work is beyond my intentions and I think the viewer has room for interpretation. However, various emotions and sensations such as “eerie and playful” and “quiet and eerie” that are concentrated when drawing a picture are mixed. I aim to keep those mixed elements to the end. My work is tied to reality and is essentially related to my own memory, but fantasy is at the heart of my work. Mysteriously vibrant dreams, games, watching movies, and other digital or non-digital experiences, always drive motifs from the surreal moments I’ve experienced. For me, life is magical and strange. You’ll need to make some adjustments and place them in a slightly different way, or look at them from a different perspective. What I draw is completely meaningless in real life, but it makes sense in my work. The fact that it is a painting is essential. Since each element is so important to the whole image, composing an image of a painting is the same as staging an exact match, and the viewer is in these slightly unrealistic yet reliable worlds. Become a witness. 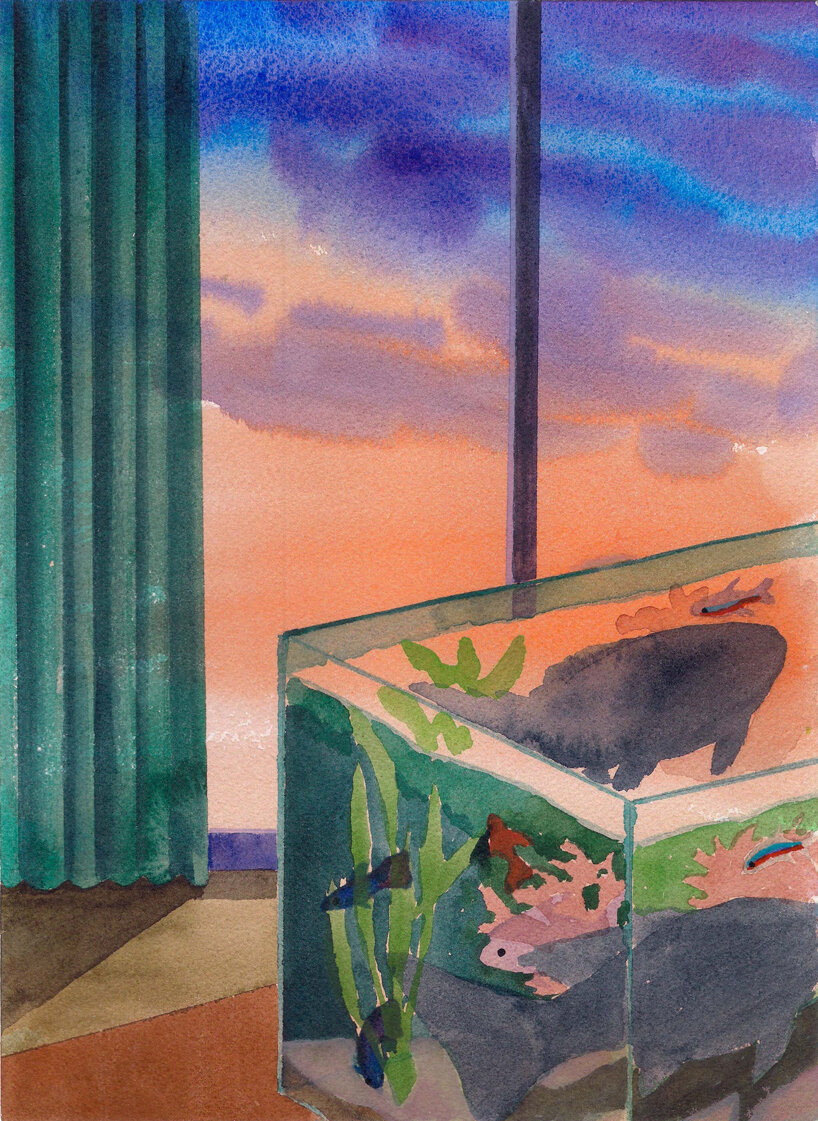 DB: How do you approach new paintings? What does the first process look like?

MC: I start work with a vague image. Choose a subject from paper scribbles that give only a rough idea. Then collect items and photos to help you draw the details. I don’t have a special way of working, but I tend to create plausible spaces and times that I feel lived and occupied. I am planning, but many parts will be materialized while actually making the canvas. Overall, I adapt a lot to what is already drawn on the canvas and change colors, shapes and configurations very intuitively. You can imagine my first process looking pretty messy and rough. I don’t really like exposing the process to others because the initial image is very different from the final stage. 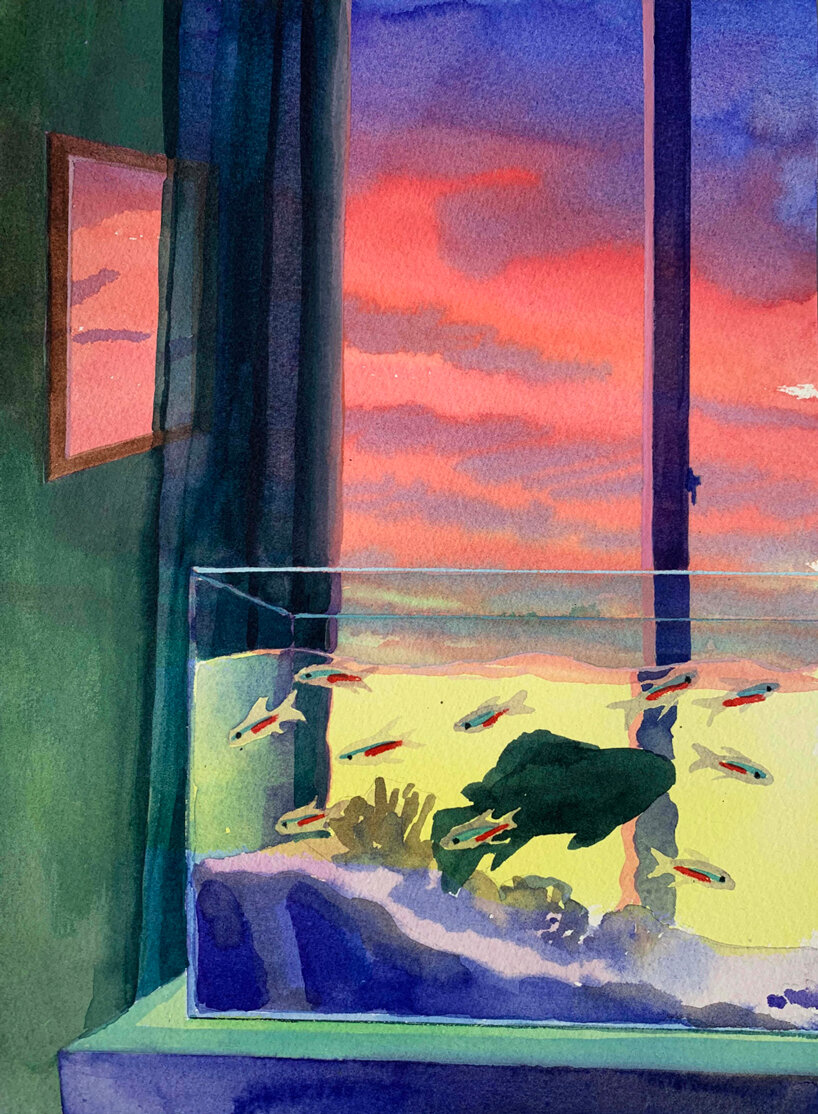 DB: What inspired you from your daily life?

MC: I’ve been in Romania for two months, so the new environment is a big inspiration for me. The pine trees are beautiful here and the animals are always around the studio. Especially at night, the moon and stars are quite bright in this area. The stars are like shining salt and I feel like I can choose them. It’s really amazing to see how bright the outside is only from the moonlight at night. It was wonderful to see the snowy landscape again after heavy snowfall for several weeks.

DB: What are you currently working on? What is your next theme to explore?

MC: I’m currently working on a series of paintings that will be screened in multiple projects this year. I will be attending the London Art Fair in Lychee first, followed by several other projects in China and South Korea. We will have a show in Seoul this weekend in May.

I am developing an image I made a few years ago. There were some things that I felt I couldn’t explore enough. I have my paintings, “Moon Ritual” (2017) and “Snowball Picnic” (2016), which I made while I was a slave. I have already started a new series based on these. In addition, I am making new works from the picture of “Sleeping Fish” and the recent picture “Cat playing with a little scared creature on a sunny day (2021)”.

What What Will the New Powerful Apple Desktop Mac Do for Photographers?