The Ministry of Foreign Affairs, along with Israeli singers, Olympic athletes and politicians, held a special photo exhibition this week to commemorate Israel’s Disability Month and International Day of Persons with Disabilities.

In the handstand exhibition (“Hafuch” in Hebrew), a famous Israeli will do a handstand or pose next to a more agile colleague with a child with a disability in an iconic place in Israel. ..

The Ministry of Foreign Affairs has launched an exhibition in collaboration with Alumot Or (Rays of Light), the Jewish Impact Center, and Haredim La Ketsev. The project is the brainchild of Ambassador Dan Oryan, director of the Balkan Peninsula and certified gymnastics coach of the ministry.

“This exhibition is designed to raise public awareness by telling the story of a unique partnership between the arts world and truly amazing young people facing the challenges of disability in both courage and humor. “It was,” Oryan said in a speech at the opening event on Monday.

Sondak, Shaked and Oshrat set the stage for singing with children with disabilities led by Ofra Cohen of Music4life. It provides children with special needs with the opportunity to learn and play music in greenhouses throughout Israel.

Curated by photographer Shlomi Amsalm, the exhibition will be brought abroad to the Israeli Embassy throughout December. Israeli NGOs working to advocate for the rights of persons with disabilities and better integration into society are also highlighted at international exhibitions.

“If we can stand together in our hands, we can do almost anything together,” Oryan said. That is the motto of the exhibition, which puts children with disabilities at the center of photography. “

“The photos of the exhibition, especially the people who created them, tell us: anything is possible,” he said. “When we’re together, it’s certainly possible to do anything. It’s possible to overcome difficulties and overcome almost all restrictions. I don’t know how to get up, but here at the Ministry of Foreign Affairs. We are proud to host this exhibition. We are impressed that you are from Israel and around the world. Thanks to you, we can do anything. “

“The upside-down exhibition is one of the most ethical things we’ve ever done,” tweeted Foreign Ministry Secretary Aaron Uspitz. “The joy of the faces of everyone who participated in it cannot be expressed in words.”

“We have created a language that is understood by everyone and connects everyone,” said Mickey Hayat, CEO of Haredim Le Ketzev, who seeks to unite Israeli society through Capoeira. 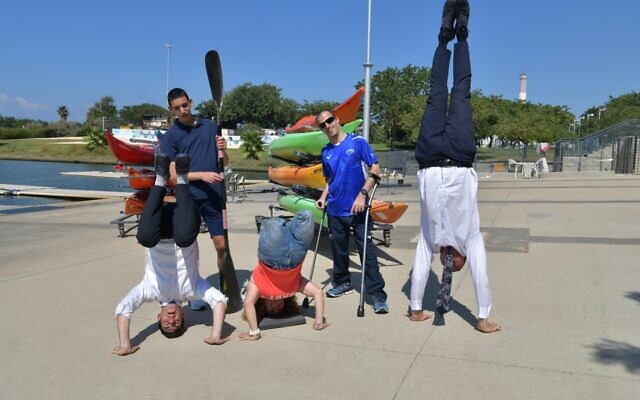 Ambassador Dan Oryan (right) joins Israeli capoeira champion Mickey Hayat (left) and an Israeli with a disability to attend an upside-down exhibition at the Ministry of Foreign Affairs. (courtesy)

As an mission to Israel’s North Macedonia, Oryan launched a series of events centered around children with disabilities. He invited children to help with cooking at the celebration of Israel’s Independence Day and called on special needs young people to participate in the march of life to commemorate the Macedonian Jews who died on the Holocaust. ..

“The Israeli Ministry of Foreign Affairs attaches great importance to the issue of inclusion and entitlement of persons with disabilities,” Oryan said.

In 2019, Oryan started a photography project called Jumping Together. This project was shot in the middle of a jump in front of a famous place with a young man with special needs.

The Champions in the Blockchain