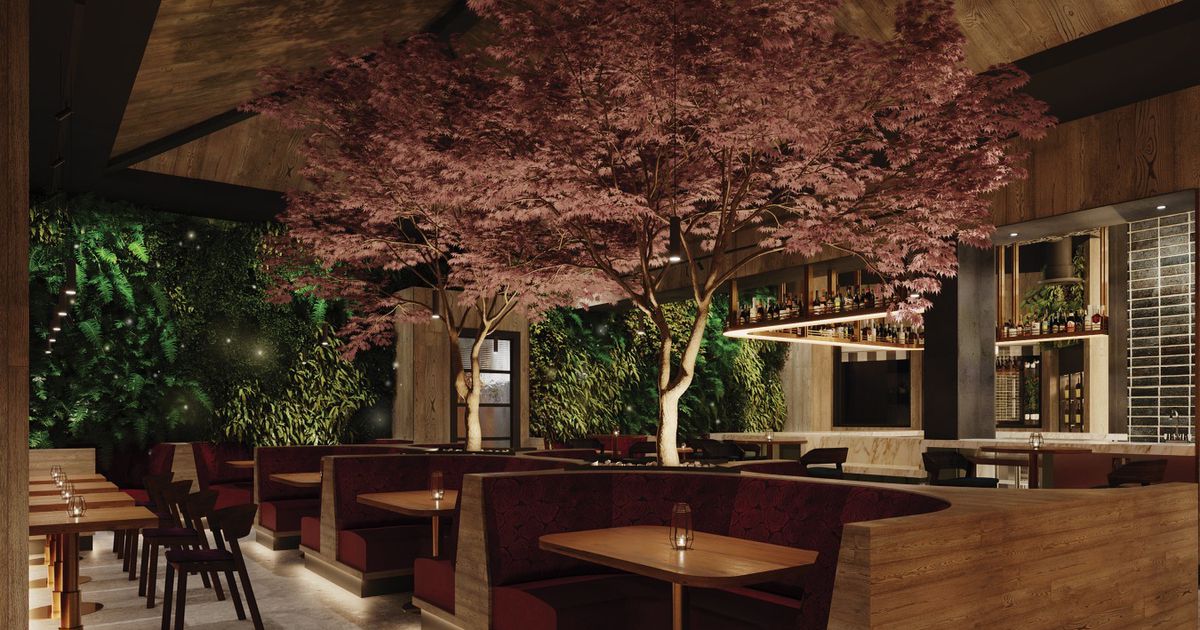 Chef Marc Marrone had a plan to open his Italian restaurant – Italian Graffiti Modern Osteria – in Las Vegas in 2019.

Marrone said he has no regrets.

“It was really a blessing that it ended up here in Utah,” he said. “The more time I spent here, and the more I sourced our products, I realized what a wonderful state it is for agriculture. It has some of the best products I’ve ever had, anywhere.”

Italian Graffiti is the latest project by Marrone and Reed Slobusky, co-owners of Nice Hospitality. (They also own HallPass Food Hall — also located at The Gateway — and Snowmobile Pizza, 877 S. 200 West in Salt Lake City.)

The Italian Graffiti space — in what used to be a California Pizza Kitchen — is 5,000 square feet and seats 125 people. It sounds big, Marrone said, but “if you look at the floor plan, the restaurant is laid out with the majority of the seating as U-shaped banquettes, which allows for a table experience.”

Every meal, he said, begins with bread displays and tableside carts. “We also have a dessert cart that comes around,” he said, adding that the restaurant will expand the tableside offerings to include mozzarella, crudites and salads.

“We opted for a true theater guest experience from start to finish,” Marrone said.

Adding to the sense of drama is an open kitchen, living green walls and vibrant trees hung with flowers and golden baubles. The leather booths and wooden walls and furniture give it a woody, old-world European feel. That combination of old and new is reflected in the menu, which is based on generations-old dishes handed down by Marrone’s family.

“I grew up in an Italian-American household in New York, and my grandparents were from Italy,” Marrone said. “As a child, I didn’t appreciate the uniqueness, or how incredible it was to have such close contact with authentic Italian food, or to be immersed in the culture. … As I got older, I realized how cool it was to have that experience, and then the experience that I had during my career – working in a French restaurant, working in an Asian restaurant, Italian developing restaurants – I took all those experiences with the heart and soul of what I learned from my family, and turned them into a restaurant concept.”

He said it wasn’t necessarily “my nana’s technique versus another grandmother’s technique. … Really, it’s understanding the purpose and the soul, and the why behind making something, and the feeling you get when you make it. I asked my nana, ‘What did you put in this? How much salt?’ And she’d say, ‘I don’t know, just ’til it tastes good.’ And I’m like, got it!” he said laughing.

“It’s not like she had a recipe book that I could have taken from her anyway and said, ‘Let’s roll out all these.’ … When I was a child, it was the care she took when she made something, whether she burned the pork before making the tomato sauce. And the way she cut the onions for this particular sauce versus another one. Or the way she cut the garlic so it wouldn’t brown so quickly. You dice the garlic because you are going to cook it slowly. … Those little techniques are what I picked up.”

For example, look at meatballs. People think they’re a dime a dozen, he said, and all the same. The real purpose behind them, he said, was for a working-class Italian family to stretch one pound of meat to feed many children by mixing it with bread and spices.

“And all of a sudden you have three and a half pounds of meatballs to serve to your family,” he said. “Many of these dishes are rooted in necessity, but also what evolved from that was: ‘How do I make it taste good?’

Part of the answer to that question for Marrone, at least for this menu: spend time at the Downtown Farmers Market. All summer he visited with small, local farmers while developing the menu. One tomato farmer, he said, had a bunch of irregular tomatoes at the end of the day one Saturday.

“They were beautiful and amazing, so I said, ‘I’ll take them off your hands,'” Marrone said. “And he said: All that you can take, I will give you. The second Saturday I went back and he still had 50 pounds. I ended up slow cooking them, just like my family always did. … Everybody grew tomatoes during the summer, and then in the early fall we harvested them and everybody got together to peel them and stew them and pot or can them.”

Those peak late-summer tomatoes are potted and now serve as the base for the restaurant’s marinara sauce, Marrone said. That sauce is complemented by their sourdough and baguette, baked in-house, along with fresh pasta, prepared from scratch and pressed daily.

“I realized there’s a ton of mills here, and flour is big here,” Marrone said. “So we started sourcing local wheat berries and milling our own flour, which goes into the bread and pasta. … Anyone can use Lehi Mills semolina flour or Central Miling’s semolina. What they don’t do is take the wheat berries and grind them based on what size wheat berries work best for this pasta, and get really scientific with it.”

For their burrata, Marrone said, they bring in cheese milk and make it in house every day. The polenta is made from freshly ground corn grown by Utah farmers.

The joy of using local produce, Marrone added, was playing with seasonal produce and using it to create an ever-evolving menu.

“Going into the spring, we’re very excited,” he said. “That’s when you’ll see the biggest shift in the menu. … We will use all those beautiful products that perish.”