Ivan Argote anchors a visual conversation on the public spaces 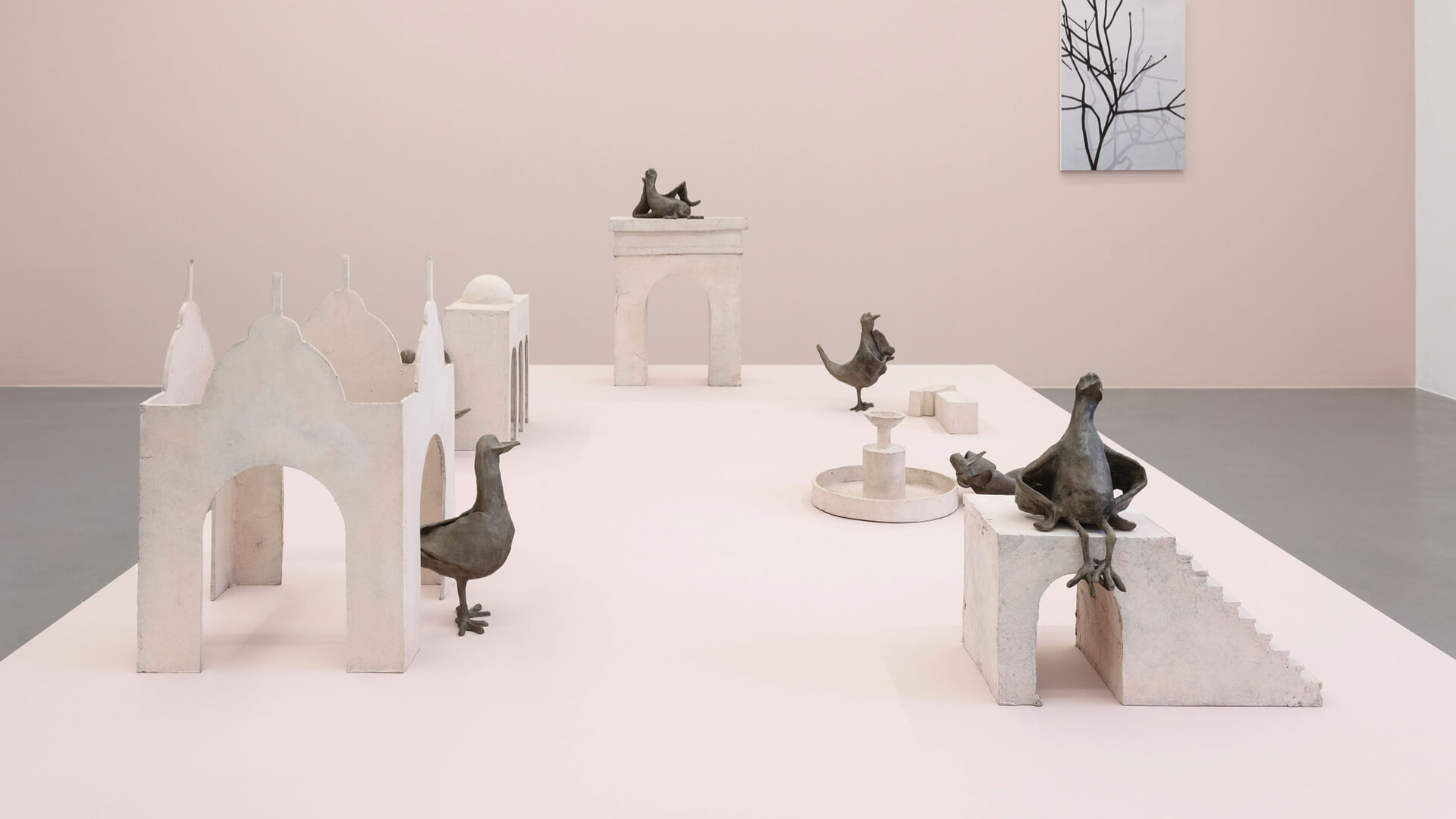 At first glance, it seems out of place to find the fragments of urban architecture populated by flora and fauna within the premises of an art gallery. The outward response opened the ground of contemplation in the solo exhibition Forebodings, by the artist Ivan Argote at Galerie Perrotin in Paris. The fresh body of paintings and sculpture, bearing the pieces of the built environment, indicated Argote’s acute attention to the environment around him. The ‘radical twist’ in the hands of Argote to the perceived idea of ​​architecture earned him a nomination for the 22second edition of the Marcel Duchamp Prize. As part of his nomination, the installation artist presents Air de jeu at the Center Pompidou in collaboration with Forebodings. Olivia Anani writes in the press release, “In a game of self-reference where even accidents can seem premeditated, these two exhibitions and the places, films, paintings, sculptures and installations they present feed back to each other, one that exemplifies the contours of the other in an endless spiral.”

Called a ‘sensitive artist’, Argote, the Colombian artist and film director based in Paris, plays with surrealism and illusion to criticize the invincible power of the empires and monuments. The heroism that underlines the national narrative and buildings was the relentless subject of his artistic practice. In an interview with STIR, Argote talks about the relationship with public space, the city and its symbols, “Our cities are characterized by a will to control; we want to control the masses, control the symbols, and also control nature. In that sense, in recent years I have worked more and more to include vegetation in my installations to talk about a loss of control over our human perspective, and also to imagine perspectives of a future where our symbols and architectures to be reappropriated by life.” In this way, the artist questions how we conceive of “otherness”.

The series of fragments of obelisks, empty pedestals and amputated monuments bathed in steel pastels: grey, yellow and even millennial pink. The dilapidated monuments turn into fountains: an indication of the crowded life. The branches sprout from the concrete to reinforce the nature that breathes against all odds. What caught the viewer’s attention was a subtle narrative about the unfinished. The joke of life finds a source to live from the moment of near collapse. The visual art installation carried a tension between the fragility of what lives on the surface of the earth and what lies beneath, they looked at the duality needed to balance life. In the exhibition, the installations are e.g. Patience, where vegetation appropriates a ruin of a statue. We also have a series of paintings with architectural landscapes, fallen obelisks and broken plinths where nature emerges from the center outwards through the rigid architectural forms with organic fluidity. After a hiatus, Argote returns to the medium of painting with the Case series where he expands the boundaries of the material concrete.

Argote refrains from a didactic approach, but like an “experienced director of our psychological spaces” he retreats to satirical humor to talk about the mobility and immutability of sculptures and monuments in public space. In the video Post Human, produced in a studio decorated with sets painted by the artist, viewers walk through the origins of the obelisk as an architectural form. It presented a world where pigeons try to remember what a human was. Like the pigeons, which occupy famous places, the tourists flock the places of historical interest. The miniature-sized souvenirs encapsulate the history of the monuments, to expand the meaning of both “reverence and popularization”.

The film Post Human a world before us where pigeons try to remember what a human was. Argote conceived it as a distant fiction, millions of years in the future, where our great constructions are now a soft and tender landscape of silent memories, and our people, the vague and funny memory in the memory of a pigeon. “Taking this slightly dystopian, but also the calm and humorous distance, is a strategy that may free us from contemporary burdens that prevent us from thinking about these issues related to monuments, and above all that allow us to to think less vainly of ourselves, knowing that we are short-lived and fragile,” explains the artist.

The intervention in the public space made by Argote activates the relationship between history, artefacts and citizens – otherwise considered a dormant site. For example, the simulation of the removal of a statue in honor of Marshal Joseph Gallieni in Paris, the relocation of a sculpture dedicated to Christopher Columbus in Madrid and a Levitation of the Flaminio obelisk in the Piazza del Popolo in Rome. The performative installations evoke a fictional narrative as well as a lived reality. “Like children who cannot symbolically cut the umbilical cord, we want to continue to believe in our heroes, in their discoveries and their virtuous victories, which are as factual as Hans Christian Andersen’s fairy tales,” reads the press release.

Not sci-fi in its true definition, yet Argote likes the feeling of entering a parallel space, a future projection and a journey to another time. At the same time, the idea is to generate questions about our political and ideological confrontations, using fiction and a degree of absurdity to evoke an empathy that can overcome our differences. The visual artist underlines towards the end of the interview that the takeaway after viewing his works is “to become aware of our fragility, to understand that our empires, nations and cities are a small moment and that we must concentrate on taking care of ourselves now. in the present.”

The exhibition ‘Premonitions’ by Ivan Argote was on view at Galerie Perrotin, Paris until 17 December 2022.

A Comprehensive Guide to the Art Gobblers