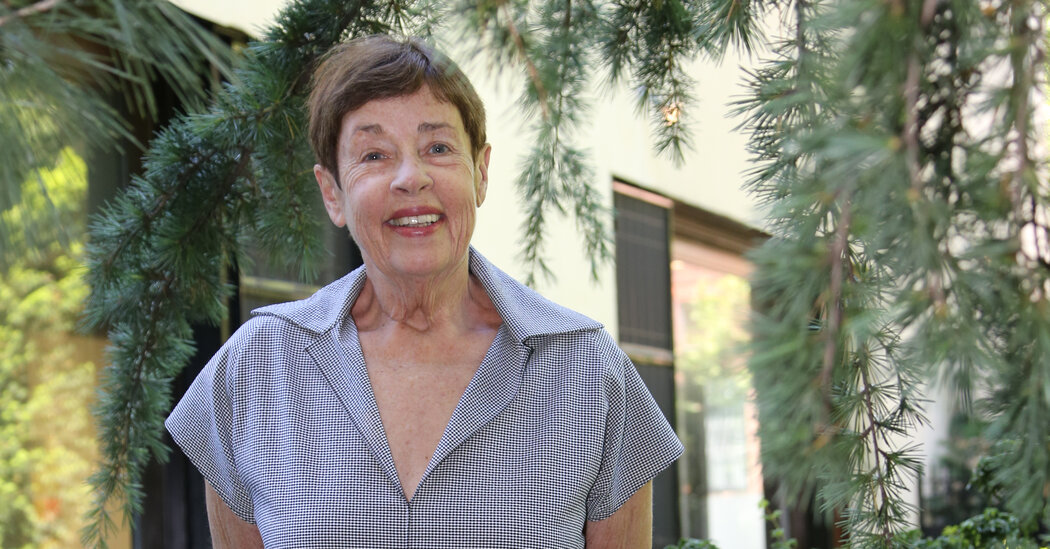 Jennifer Bartlett, a New York artist whose conceptual paintings executed on one-foot-square white enameled steel sheets (inspired by the city’s subways) blossomed into “Rhapsody,” a landmark painting extravaganza of more than 153 feet tall, died on July 25 at her home in Amagansett, N.Y. She was 81.

Her death was announced jointly by her New York representatives, the Paula Cooper Gallery and the Marianne Boesky Gallery.

Her daughter, Alice Carrière, said that while Ms. Bartlett struggled with dementia, the cause of death was acute myeloid leukemia, which was diagnosed in early July.

Ms. Bartlett was an unrepentant maverick who began as a fringe member of the post-minimalist generation, Conceptual Art Division, designing mathematical or geometric systems that she just had to execute, without further aesthetic decisions. She characterized it as a “What if?” approach.

With “Rhapsody,” a major turning point in late-20th-century American art, Ms. Bartlett integrated Conceptualism’s cerebral style with her medium of choice, painting — often to the chagrin of artists on both sides of the painting/not- painting corridor . She also broke the wall separating abstraction and representation, as did painters such as Neil Jenney, Lois Lane, Susan Rothenberg and Joe Zucker. But with “Rhapsody” the break was epic, noisy and permissive.

The work was first exhibited in 1976 at the Paula Cooper Gallery in SoHo, where its 987 plates took up all the available wall space. Later, to the surprise of many, it appeared to be custom-made for the enormous atrium of the Museum of Modern Art, whose collection it entered in 2005, a gift from the architect and collector Edward R. Broida.

The English critic John Russell reviewed “Rhapsody” in The New York Times and called it “the most ambitious single new work of art that has come my way since I began living in New York”. It summarized aspects of Pop, Minimalism and Conceptual and process art, while also opening art anew to images, narratives, repetitive patterns, appropriation and sharp juxtapositions that continue to inform painting.

The images span numerous styles, from photorealistic to naive, with various modernist styles in between. It explores line, form and color as ends in themselves, while also setting out the simple themes that would occupy Ms Bartlett for the rest of her life: tree, mountain, house and ocean.

Each steel plate in “Rhapsody” was printed with a grid of quarter-inch squares, to which she added dots according to whatever system she had set up, sometimes with results that looked computer-generated.

She characterized the work as a “conversation” – “in the sense that you start explaining one thing and then drift off to another topic to explain analogies and then come back again.” But it’s a turbulent one, full of interruptions and arguments and, it seems, with everyone talking at once.

“Rhapsody” m. Made Bartlett a star, although it was not universally loved. Indeed she had her own doubts, especially since she had not seen it completed until it was installed at Paula Cooper’s. Worried, she told writer Calvin Tomkins for a 1985 profile in The New Yorker that the job might be the worst idea she ever had. The title “Rhapsody,” suggested by a friend, “was so terrible that I loved it,” she said.

“The word implied something bombastic and overambitious, which seemed accurate enough,” Mr. Tomkins quoted her.

She liked to recount, as she did in a 2011 oral history interview for the Archives of American Art, how one prominent New York curator said of her dotted surfaces, “It’s not painting, it’s knitting. ” (The words reflect Truman Capote’s dismissal of Jack Kerouac’s “spontaneous” prose – “It’s not writing, it’s typing.”)

In the New York of the 1970s and ’80s, Ms. Bartlett was one of the first artists of her generation to make a living from her work, which she sometimes did lavishly and sometimes not – budget was not part of her vocabulary – while she often friends helped. and family members in need. She was also one of the first to work directly with out-of-town dealers rather than through her New York representatives.

When New York’s attention faded in the 1990s, she developed an extensive network of galleries in other cities, where she mounted numerous shows of new work. At Locks Gallery in Philadelphia alone, she had more than 20 solo shows from 1994 to 2021, usually accompanied by catalogs.

Mrs. Bartlett took a 20-year hiatus from appearing with Paula Cooper beginning in 1996; during that period she rarely exhibited in New York and, when she did, she usually hopped from gallery to gallery. Her work seemed more popular—and salable—outside the New York art world. In 2016 Ms. Bartlett started showing again with Ms. Cooper, who in 2018 joined forces with Ms. Boesky.

Ms. Bartlett was a stylishly dressed, opinionated, extraordinarily prolific artist. Despite apparently spending a lot of time lying on a couch with a cigarette in one hand and a drink in the other, she said she would go crazy if she couldn’t work. And work she did: painting, printmaking and drawing, especially in pastels, and designing furniture, glassware and jewellery, with limited forays into set and costume design.

With all this she found time to read voraciously; giving long, entertaining interviews; wrote an autobiographical novel, “A History of the Universe”; and played a major role in the redesign and furnishing of three substantial live-work residences in New York City: two in Lower Manhattan – a large loft on Lafayette Street and a poured concrete industrial building on Charles Street (in which she was a added intricate garden) designed with Madison Cox and an upstairs pool)—and one in Brooklyn, a former union hall in Fort Greene, whose ambitious tree garden moved in with large rocks on a flat tray.

During her marriage to the German actor Mathieu Carrière, from 1983 to 1993, she lived half the year in a large apartment in Paris – furnished almost entirely in modernist designs by the Finnish architect Alvar Aalto – in a building where “Last Tango in Paris” was. filmed, as she rarely failed to tell anyone who visited.

Ms. Bartlett was as systematic in her life as in her art. When she arrived in New York in the late 1960s, she sidestepped bohemianism, instead wearing pearls, jersey sets and poodle skirts in tartan wool, the checks of which would appear more often in paintings than actual grids. For a long period, from the late 1970s, she only wore the minimalist fashions of Zoran and later those of Ronaldus Shamask. Almost without variation, she wore her hair short or with bangs.

She loved lists; her novel took several. At the beginning of her career, she made lists of art ideas and then marked those that she thought other artists “possessed”. And, in her slightly brassy, ​​ironic monotone, she often spoke lispingly.

At the beginning of a 1985 interview, Ms. Bartlett’s friend and fellow painter Elizabeth Murray asked her what was on her mind when they met as students at Mills College in Oakland, California in 1962. She replied: “Being an artist, Ed. Bartlett, Bach cello suites, Cézanne, going to graduate school, going to New York, Albert Camus, James Joyce.”

She was born Jennifer Ann Losch in Long Beach, California, on March 14, 1941, to Edward and Joanne (Chaffee) Losch. Her father was an entrepreneur whose main business was a pipeline construction company; her mother attended the Otis Art Institute in Los Angeles and worked as a fashion illustrator until she had children.

Jennifer, the oldest of four, was precocious. She drew constantly, beginning in childhood; loved the sea and often swam in it (she also drew large versions of sea creatures); found inspiration in her mother’s single art book, on French Post-Impressionism; and was excited about a Van Gogh exhibit she saw in Los Angeles. She came out of high school determined to be a painter.

After graduating from Mills in 1964, Ms. Bartlett married Edward Bartlett, a Stanford graduate, and the two went to Yale for graduate school, he in medicine and she in art. (They divorced in 1972.) In the Yale art department, current students, recent graduates, and their friends included some of the most ambitious and competitive artists of her generation: Brice Marden, Richard Serra, Joel Shapiro, Chuck Close, Lynda Benglis, and Nancy Graves. After moving to Greene Street in SoHo in the late 1960s, she befriended artists Joe Zucker, Jonathan Borofsky, John Torreano, Joe Brainard and Alan Saret, who held her first New York solo show in his Spring Street loft has.

When she arrived in New York, Ms. Bartlett, inspired by the art of leading conceptualist Sol LeWitt, developed systems on graph paper, which she usually damaged or wore out. One day it occurred to her that New York City’s subway signs “had taken a lot of punishment,” she said in her Archive interview. They suggested, she said, “a hard grid paper that was impenetrable to me.”

The 12-inch-square plates based on the signs had the added convenience of being small units that were easy to work on, pack, and transport, but could also assume monumental scale when installed. She liked the enamelled steel’s lasting “freshness,” she said; it would not physically age or look outdated. After working out the production of the steel plates with a small manufacturer in New Jersey, she destroyed her previous paintings.

Her grid plates represent Ms. Bartlett’s consuming interest in the mechanics of painting, and she would use it for the rest of her life, as in two more epic records, “Recitative” (2007) and “Song” (2009-10). .

She also expanded her material. Her next major project after “Rhapsody” was “In the Garden”, a suite of nearly 200 drawings of a decrepit garden behind a small villa in Nice, France, where she spent the winter of 1979-80. These works became the basis for large paintings – on plates, oil on canvas and enamel on glass – and several different types of prints.

“In the garden” was also important because Ms. Bartlett worked from life, especially her immediate surroundings, including, eventually, her studios, her homes and her own gardens. The 1991-92 “Air: 24 Hours” consists of 24 large canvases, each depicting one of these locations at a specific hour of the day. She depicted her living spaces again in 1992-93 with “24 Hours: Elegy”, usually including an item of clothing or a toy belonging to her daughter. In these works, dense buildups of hand-painted grids create a grainy atmosphere reminiscent of that created by Georges Seurat’s dots.

In 2012, a hospitalization of several weeks – caused by what her daughter, Ms. Carrière, described as “a series of symptoms that never quite coalesced into a diagnosis” – led to the “Hospital Paintings”, an uncharacteristically stark, realistic group of 10 canvases. Each is disrupted by a thick, arbitrary line of color running from edge to edge.

In addition to her daughter, Ms. Bartlett is survived by two sisters, Julie Losch Matsumoto and Jessica Ann Losch.

Ms. Bartlett, indomitably confident and independent, has often been asked about her views on feminism, as she was for the Archives of American Art in 2011. In that case, she replied: “I’m not naturally the feminist type. I just wanted to be the best artist.”