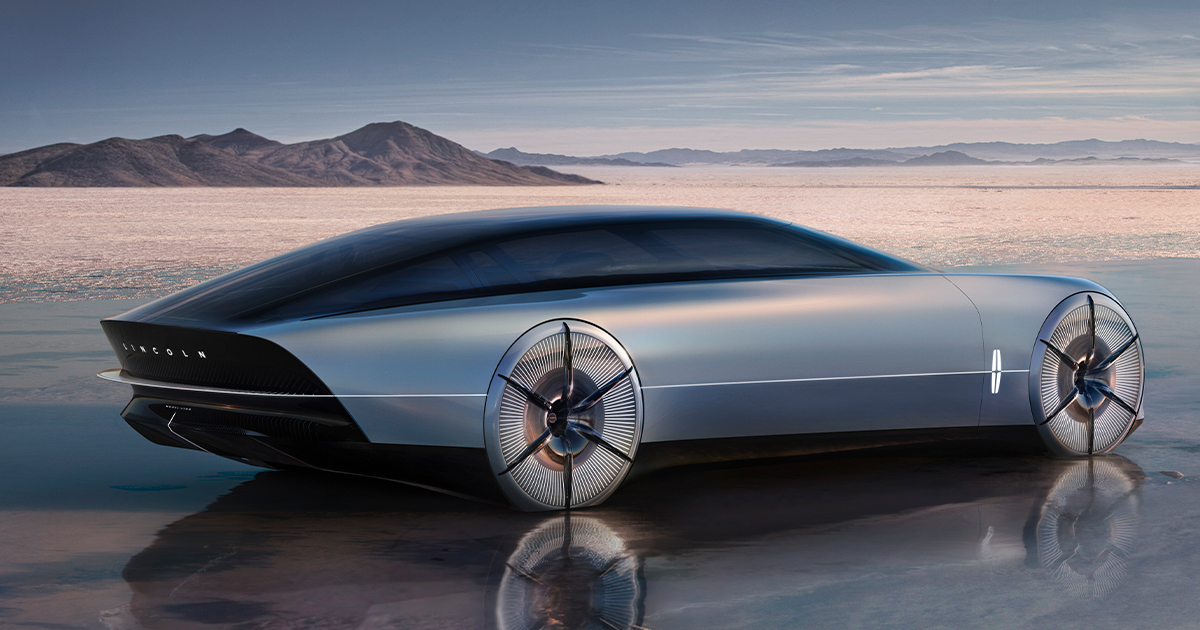 This year, Lincoln will celebrate its 100th anniversary. Rather than reminiscing about its storied past, however, the luxury automaker is sharply focused on its future. As the marque of choice at this week’s famed Pebble Beach Concours d’Elegance, held annually on California’s Monterey Peninsula, Lincoln is debuting its visionary Model L100 concept.

Not surprisingly, the Model L100 is being pitched as an autonomous electric vehicle. It also follows the recent trend towards glassy lounges on wheels. But even as a design-only concept, Lincoln’s latest is a forward-thinking look at the brand’s take on the future of luxury mobility.

Lincoln calls its current design ideology “Silent Flight,” but it blends well with the brand’s history of sybaritic luxury cars with muted, relaxing interiors. Right now, those interiors are strictly on upright SUVs like the Corsair, Aviator, and Navigator, but the Model L100 is a completely different animal.

The brand concept spins off the convention that cars are strictly transportation vessels (even if some are for canyon-carving fun and others are simply city commuters). Instead, Quiet Flight turns the ride into a kind of moving shrine. One where occupants—no drivers needed—are in a traveling temple made with beauty and connectivity in mind. And not necessarily the plug-in and over-the-air technical stuff (although there is plenty of that), but the connection between fellow passengers or within yourself.

The Lincoln Star Concept was the most recent example of Quiet Flight in motion, but the Model L100 Concept is what takes that design DNA beyond today’s infrastructure limits and physical production constraints.

The Lincoln Model L100 concept draws on the brand’s origin story by honoring the first Lincoln ever built, the 1922 Model L embedded in its name, but it also references the space-age minimalism of the early 1960s Lincolns and represent the quiet and luxury. lounge-on-wheels feel of the brand’s most popular sedans of the 1970s and 1980s.

While the Lincoln L Series started it all, the Model L100 concept is more forward-looking than retro. Its fastback shape is also au courant and bears some resemblance to Cadillac’s over-the-top Celestiq and Bentley’s EXP100 GT.

The design structure of the Lincoln Model L100 is equal parts alluring and alarming. His profile is long, with simple yet delicate lines. Aerodynamics was obviously a leading factor as the Model L100 exhibits little in the way of sheet metal bumps and bruises. Its entire surface is slightly rounded, precision smooth, and finished in a ceramic three-layer metallic paint.

Chrome, long a favorite tool of Lincoln designers, is notably absent from this luxury vehicle. Instead, matte acrylic is used to create a distinctive band line. At night, this single thread illuminates a flowing, soft detail around the entire vehicle surface. One wonders if a dimpled smile would throw the coefficient of drag off the deep end.

Until then, the Model L100 doesn’t smile or smile, or even growl an imminent challenge to the future of mobility. With no engine, there is no grill. Not even a mock-up of one. In place of the traditional (faux) grille is the traditional Lincoln emblem that prominently fills the metal void and is bordered by icy character lines.

Light is subtly and purposefully implemented throughout the Model L100 exterior. The large wheels have similar illuminated radials between its six spokes, as does the Lincoln badge at the rear.

Along the outer edge of the long transparent hood are more lighting effects, most concentrated towards the front and positioned as headlights. In another nod to its heritage, a crystal greyhound, which was a hood ornament chosen by Edsel Ford in the 1920s, is visible under the clear hood.

Approaching the vehicle, the signature Lincoln Embrace welcome lighting greets riders warmly, but it’s the reverse-hinged doors and glass roof (yes, the roof opens) that deliver a compelling arrival and departure notice. The effect is similar to some show cars of the 1960s, when giant hatches that revealed the entire passenger compartment were briefly fashionable.

The Living Room Inside

Thanks to large glass panes and translucent surfaces, the Model L100 interior feels airy and spacious. And that’s without the roof being open. The animal-free interior material is luxurious to the touch and features signature accents such as amethyst accents within the recycled suede fabric.

The interior environment synchronizes with personal preferences to create an immersive experience for passengers. These include the ambient lighting, canopy and digital floor that work in harmony to refine a customized interior experience.

Even without a steering wheel, the Model L100 cabin is considered “driver-centric,” but can be configured in a social setting. The front row seat can be flipped to create a lounge-like space where front and rear occupants can face each other while traveling.

Lincoln has not disclosed what will power the Model L100 concept nor has it released any specifications regarding the estimated lineup. What is expected is that any future Lincoln will be equipped with intelligent driving systems and constant connectivity. This is not to say that passengers will always have to be “on”. On the contrary, the Model L100 offers the opportunity to connect and disconnect, leaving all the work—technology and driving—to the vehicle.

Technology to support this creation of a moving shrine are features such as the digital floor and interactive center console. Not just another superfluous screen of extravagant proportions, the floor works in conjunction with all points of interior comfort, including sounds, scents and touch, to support an atmosphere similar to the passengers’ settings.

The center console screen is laid out like a chessboard and features and jewel-like command controller. The controller acts as the de facto steering wheel, allowing the occupants to drive the autonomous ride in what is hopefully an intuitive way.

The Model L100 is certainly a high concept, but Lincoln didn’t reach its centennial by playing it safe. While quite a departure from Lincoln’s current SUV-only lineup and unlikely to reach production that looks like it, the Model L100 undoubtedly offers some hints of the next steps in Lincoln’s electric future.