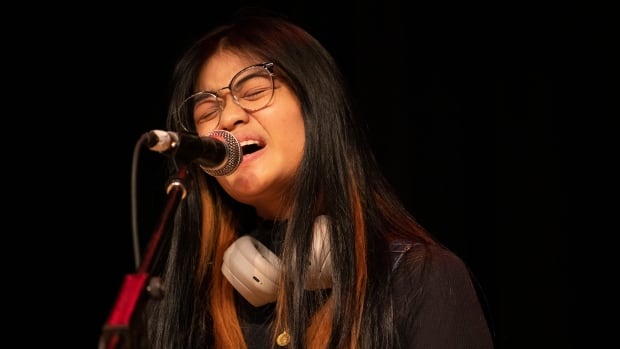 Daisy Caneda sings a quiet harmony with Hera Nalam as Andrew Sannie and Mooki Awuyah aka Mooki rap over a beat at a practice space on Wednesday ahead of their live show in the coming days.

When the knocking stops, Nalam beams with a smile as she tells Caneda, aka Daiisu, that she loves what she’s hearing – she just could use a little more volume from the 19-year-old upstart.

“It’s really comforting to hear people who know what they’re talking about because it makes me want to be so confident,” Caneda says.

She and the band performed together at the West End Cultural Center on Friday night for an event called Live Mixtape. The event took place once before in 2018.

The event brought together established local and emerging artists to write a series of new collaborative pieces for the show in just a few weeks prior.

Artistic director Elliott Walsh, aka Nestor Wynrush, said it was important to include a mentorship element to the program, inviting a small number of emerging artists like Daiisu alongside more experienced creators to see how it’s done and get feedback.

“It’s having people who have the same life experience and having them show a way, but also for you to have a voice and a place,” he said.

“The theme is about love and love as an ethic, and one of those things we’re trying to do is create community in this space, and I want people to reflect on that because it’s a safe place for us to grow and nurture each other.”

Writing on that theme, emerging poet Jessica Boittiaux, aka Botcho, created a spoken word piece about how we measure love.

“I thought about what love means to me and I thought about family and how they always said, ‘I love you more, I love you the most’, and just that and seeing how much love for me meant,” she said.

Boittiaux grew up in the North End of Winnipeg. She said the mentorship event is an important example of making art accessible to inner-city youth and emerging artists.

She said she was nervous about performing on stage for the first time in front of a live audience Friday, but felt driven by the sense of community she felt from Walsh and others.

“It’s definitely an opportunity that not many get, new artists get to connect with really established artists,” Boittiaux said. “I made new friendships. I discovered new art. I discovered that there are ways for artists from different paths to connect and work together on a project.”

The event was associated with the mural and culture festival Wall-to-Wall, organized by Synonym Art Consultation and the Graffiti Art Gallery.

In addition to collaborating, Caneda wrote and performed an original of her own based on themes from the Japanese animated film on Friday night Howl’s Moving Castle.

“It was inspired by…someone denying that they feel love because they’ve never felt it before…and then slowly realizing that it’s really happening now,” she says.

It was the largest live audience Caneda had ever played to. She started playing live on the streaming platform Twitch during the pandemic. She only has a few other, smaller scale live performances under her belt.

At the start of rehearsal Wednesday, Walsh went around the room asking performers to define what community means to them, to help each other understand each other and feel a little more comfortable being vulnerable.

Before she started singing and tinkering with the Live Mixtape crew, Caneda says she “didn’t really understand the meaning of community.”

“I always stayed at home, even before the pandemic. It was just me and my circle of friends. It’s the only world I knew, so actually this mentorship opened up a whole new world for me that I didn’t know not.” she said. “I’m just very grateful for this opportunity.”

Walsh said he’s happy to help give that to her, Boittiaux and others at the forefront of their artistic journeys.

“Because some people decided to invest in me when I was younger … I think it’s just the right way to go: everyone learns one.”