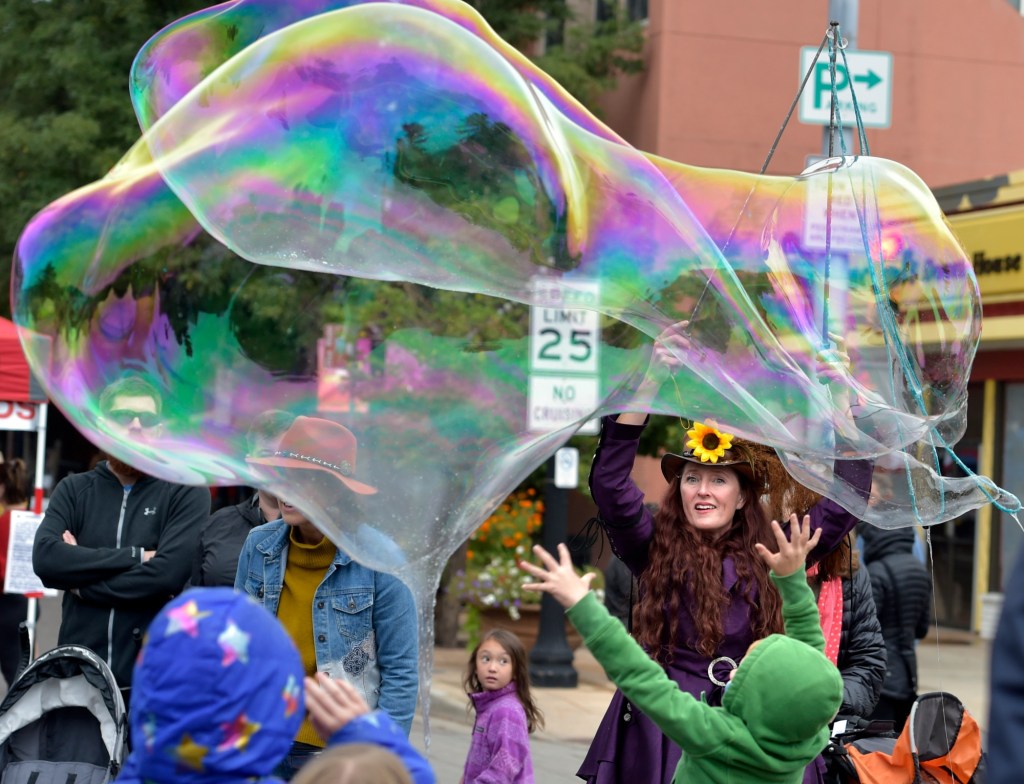 The evening was cold and rainy, but nothing could keep hundreds of community members from coming out Saturday to ArtWalk on Main, an annual street festival in downtown Longmont.

“Everybody just wants to be here,” said Maddie Frank, a volunteer for the event through the Longmont Downtown Development Authority. “I think people get really excited about any events that happen here, especially because so many people are included.”

Hosted by Longmont’s Firehouse Art Center, the festival transformed four blocks of Main Street — from Third Avenue to Longs Peak Avenue — into a walking center with more than 100 booths run by artists, businesses and nonprofits.

One particular feature of this year’s ArtWalk was the opportunity for guests to visit Old St. Stephen’s Church and paint murals that will temporarily serve as faux stained glass windows.

Several of the real windows were damaged in cases of vandalism last month. The mosaic-style murals will cover the plywood board where the stained glass was.

“We wanted to do something collaborative to beautify the space,” said project leader Lisa Barton, a staff member at Trailhead Church in Longmont.

Barton said she was surprised by the number of painters who showed up Saturday. The three murals were almost finished around 6:00 p.m., just two hours after the event.

Live music and dance performances were offered at ArtWalk, although some were canceled due to the rain. Members of the Longmont Symphony Orchestra played for the public from under their tent, and a large stage on Fifth Avenue hosted several bands throughout the evening.

Art activities for children and adults were also available. The Grover Cleveland Art Appreciation Society has turned its booth into a pop-up exhibit showcasing its impressive collection of Grover Cleveland-themed contemporary art. Co-founder Eric Anderson encouraged visitors to draw their own depictions of the former president.

“I love getting kids to draw pictures of Grover,” Anderson said. “At this type of event, we’ll probably get about 15 to 20 submissions.”

From potters to painters to clothing designers, artists of all kinds were well represented on Saturday with stalls along Main Street.

Lara Mann, an artist with the Longmont Artists Guild, engaged guests at her booth by demonstrating her process for painting abstract landscapes. Mann said the guild is a “wonderful” support group for local artists who are passionate about showcasing their creations.

“I think the most fulfilling part of being an artist is sharing your work with other artists and art lovers,” she said.

Mann said when she moved to Longmont last year, ArtWalk on Main was one of the first events she participated in. She likes how the festival invites members of the community to connect with artists in an informal setting.

“There is not a lot of pressure,” she said. “You can love art for art’s sake without explaining yourself.”