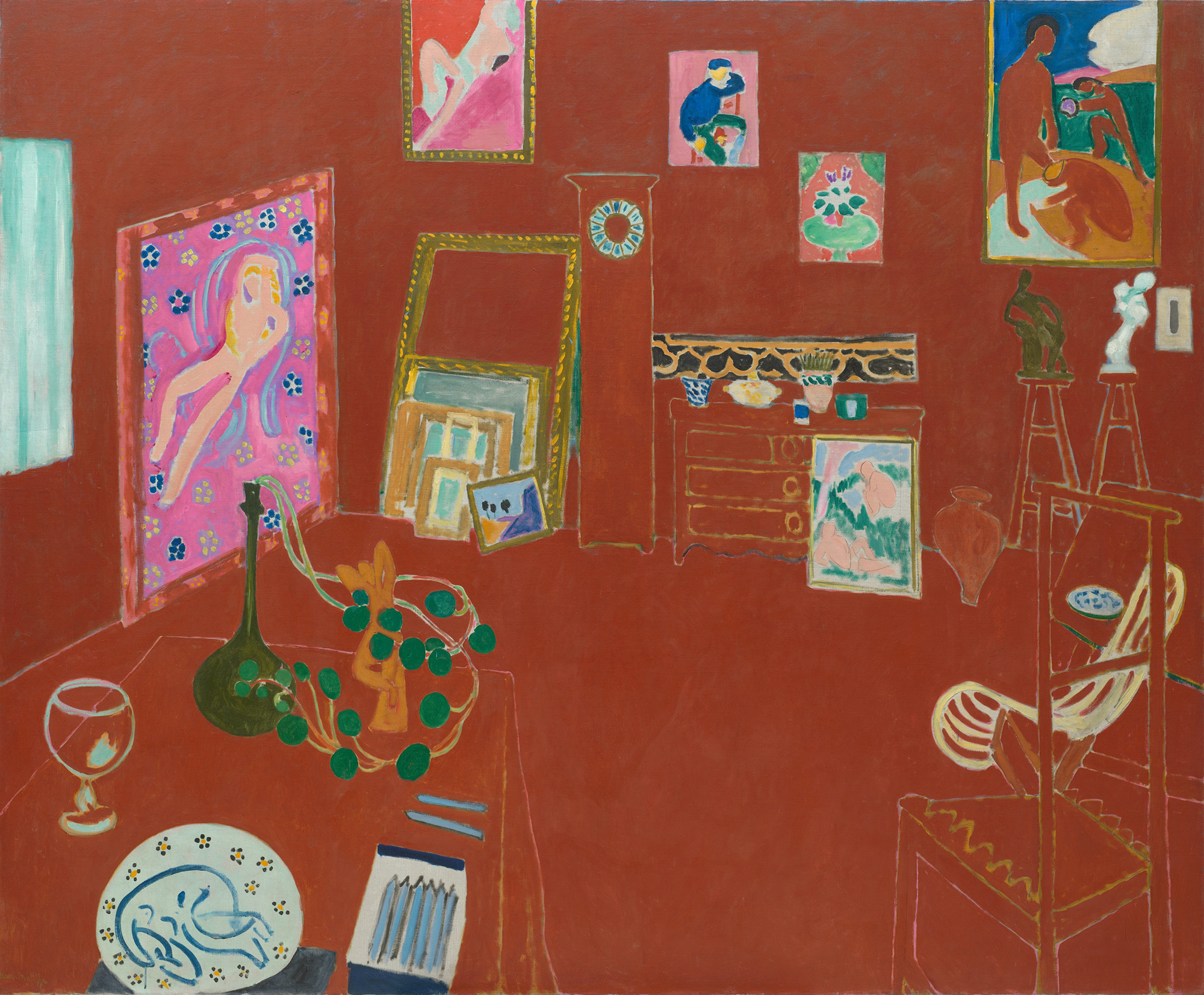 Can anything substantially new be said about a canonical modernist painting? The Red Studio at the Museum of Modern Art (MoMA) tells the story of Henri Matisse’s painting of the same name from 1911. For several years the painting was unsold. Rejected by his great Russian collector, Sergei Shchukin, who told Matisse that he preferred works with figures, the painting was included in Roger Fry’s significant Post-Impressionist exhibition in 1912. But in neither London nor the United States, where the show traveled, it was sold. In 1927 “The Red Studio” was purchased as a decoration for a fashionable London social club. When that nightclub closed, it went to Georges Keller’s gallery, Bignou Gallery, in New York City. Finally, in 1949, thanks to Alfred H. Barr’s initiative, it entered the MoMA collection.

“The Red Studio” depicts Matisse’s studio, painted in intense solid red, except for his own works of art, which line the walls or stand on the floor and on the table in the foreground. The exhibition texts provide full descriptions of the 11 works contained in the painting, as well as extensive information about Matisse’s actual studio, where this work was painted. (In addition, a video features four conservators discussing the painting.) The strangest, and largest, is his “Large Nude” (1911), the pink work with a decorative background and frame on the left, which was immediately removed at Matisse’s request. was destroyed. after his death. Unlike most of his nudes, this is a curiously tough composition. A large grandfather clock in “The Red Studio” has no hands, a reminder that we are in the timeless world of aesthetic pleasure. The show also presents Roger Fry’s “A Room in the Second Post-Impressionist Exhibition” (1912), which shows the painting in the London exhibition.

Because “The Red Studio” has become so famous, it takes some effort to see what a very strange painting it is. As Hilary Spurling writes in her 2005 biography of Matisse, Matisse the Master, we see what looks “like a detached wall segment with rudimentary objects floating or hanging on it.” She refuses to simply accept its status as a masterpiece, pointing out how problematic the work originally appeared. Shchukin’s preference for the compositions of this period with figures was not surprising. And perhaps it is also not surprising that in 1948 Clement Greenberg, who considered Matisse the greatest living artist, found this work “only the fragile beginning of something in the way of great dramatic decoration…”. The exhibition catalog gathers a great deal of information, but it does not provide a useful perspective on the strange history of this painting, which remained unsold for decades.

Pictures within pictures were a common trope in Old Master paintings. In the 17th century, for example, Giovanni Paolo Panini represented a number of extensive ensembles of works of art. (His “Modern Rome,” from 1757, is in the Metropolitan Museum of Art.) Such paintings celebrate the power and richness of a collecting culture. In modern art, the trope has served a more personal role. In Maurice Denis’s “Homage to Cézanne” (1900), for example, a number of Cézanne’s admirers group around one of his still lifes, demonstrating the artist’s importance to Denis’s generation of painters. “The Red Studio” radicalizes and transforms that tradition by including only Matisse’s own works, and no figures, in the empty studio. It is easy to understand why Mark Rothko found the painting – a wonderful, pioneering exercise in large-scale composition – so interesting. Remove the artwork and furniture, which are immersed in the field of intense red, and you have a remarkable anticipation of the color and scale of Rothko’s paintings. But since Matisse was not interested in abstraction, it is worth approaching this painting on its own terms – not as an anticipation of Rothko or of more recent monochromatic abstraction, but as a stage in Matisse’s personal development, which is best understood by looking at some of his works (not in this show) that he produced a decade or two later in Nice.

Until relatively recently, these Nice paintings and drawings were generally seen as highly traditional works of art, with only a marginal place in Matisse’s career. Abandoning the competition with Pablo Picasso, who produced his adventurous paintings of the 1910s, and leaving his family to move to the south of France, Matisse depicts himself in the act of making art. These works depict him, his model and the image in progress. In some drawings (“Reclining Nude in the Studio,” 1935, is the best one), he develops that conception in a more radical way. In the lower right corner, the artist draws the very image you see, resulting in a mise en abyme, the infinite regression of a drawing within the drawing. This process takes the viewer imaginatively into the creative process, as if the painting is being created right before our eyes. So he discovered that he did not need to produce the large painting of his workplace that is “The Red Studio” to reveal his studio life; the ink on paper “Reclining Nude in the Studio” achieved that goal more effectively.

In the Nice images, the drawing or mirror creates the illusion of placing the viewer in a self-contained space: We are in the picture we see. Matisse produced a large number of such paintings and drawings – this theme of the radically self-sufficient artwork was deeply fascinating to him. “The Red Studio” anticipates this motif. In 1911, Matisse created a self-contained world in his studio by showing 11 earlier works of art, without the presence of the artist. The Nice images look very different from “The Red Studio”, but they achieve the same goal. But instead of the multitude of works of art in the studio, he renders only one image, the very one we see. Why show many works when only one is needed to reveal studio life? It is no wonder that “The Red Studio” has been misunderstood, because to see it as a step in the direction of modernist abstraction is to misunderstand its fundamental goal.

Matisse: The Red Studio continues at the Museum of Modern Art (11 West 53rd Street, Midtown, Manhattan) through September 10. The exhibition was organized by Ann Temkin, The Marie-Josée and Henry Kravis Chief Curator of Painting and Sculpture, The Museum of Modern Art, and Dorthe Aagesen, Chief Curator and Senior Researcher, SMK – National Gallery of Denmark; with the help of Charlotte Barat, Madeleine Haddon and Dana Liljegren; and with the collaboration of Georges Matisse and Anne Théry, Archives Henri Matisse, Issy-les-Moulineaux, France.

Editor’s Note, 8/25/2022, 5:56 PM EST: An earlier version of this article incorrectly stated that “The Red Studio” went to Pierre Matisse Gallery, instead of Bignou Gallery. This bug has been fixed.