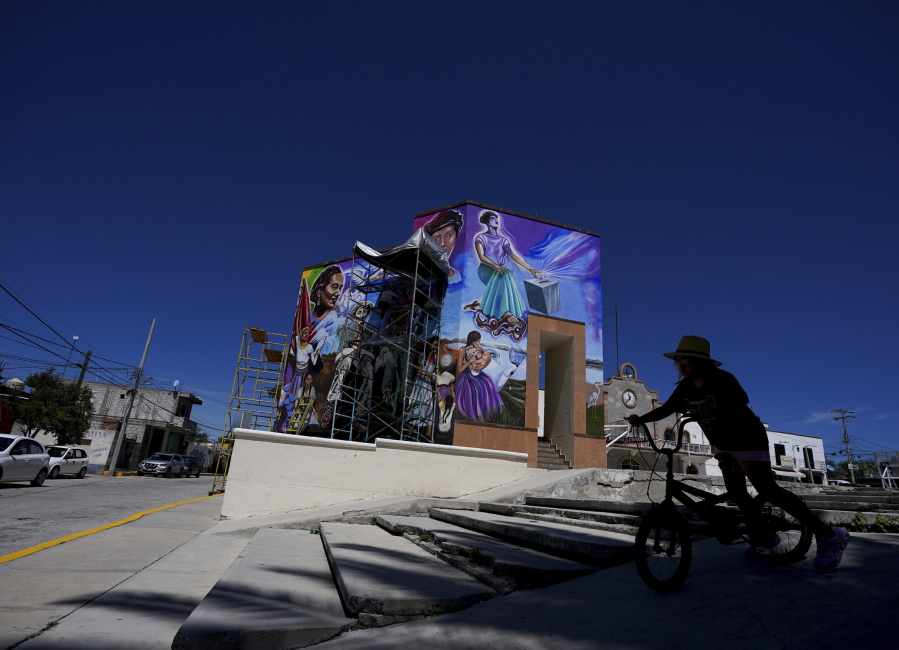 POXINDEJE, Mexico – A painter in orange overalls takes on the image of a hand holding a gun as an artist perched on scaffolding carefully places pieces of colorful ceramics into a mosaic of a guerrilla fighter.

The artists don’t just decorate a wall. Together they are helping to revive muralism, a movement that put Mexico at the forefront of art a century ago.

Just as their famous predecessors did shortly after the Mexican Revolution, teachers and students of the Siqueiros School of Muralism are on a mission to keep alive the practice of using visual images to share messages of social and political importance.

The mural in progress is on three walls of a municipal building in San Salvador, a small town of about 29,000 people north of Mexico City in the state of Hidalgo. The Siqueiros school is based in a converted primary school in the nearby hamlet of Poxindeje. One of its co-founders is Jesús Rodríguez Arévalo, a pupil of disciples of Mexico’s three muralism masters: Diego Rivera, David Alfaro Siqueiros and José Clemente Orozco.

“The school is small, a humble space, but it’s very serious and it’s professional,” Rodríguez said.

One hundred years ago, Rivera, Siqueiros and Orozco also started at a colonial-era school-turned-art laboratory. It was 1922, and they were charged with fulfilling the then Mexican Minister of Education’s mission to take art out of the galleries and into public spaces. The plan, part of a national literacy campaign sponsored by the national government, transformed Mexico and permeated the entire continent.

The artist’s manifesto was to “make ideological propaganda for the benefit of the people” and to give art “a purpose of beauty, of education and struggle for all.”

They identified with the agrarian and proletarian revolutions and mingled with European artists who fled to Mexico from both world wars. Sponsored by the government, they had access to the country’s most majestic buildings and the necessary resources to experiment with new techniques. Eventually, they began painting in other nations, including Argentina, Chile, Cuba, and the United States.

Despite the support of Mexican political leaders, their work has proved too provocative in some places outside the country: A mural Rivera painted in New York’s Rockefeller Center was censored and then demolished for glorifying communism, according to his opponents.

“We’re a little more cowardly,” said Ernesto Ríos Rocha, 53, a muralist who is trying to establish Mexico’s first muralism university in the Pacific coast state of Sinaloa. “We talk more about peace.”

However, the murals created today in San Salvador and other small towns still have much in common with those created in the early 20th century: they contain themes of war, injustice and oppression – as well as 21st century issues such as climate change and violence against women.

But Rodríguez and his students don’t expect monumental reverberations from their work. Their aspirations are lower and their income is more modest, mostly coming from local governments who commission them to paint murals and support from community members who donate meals and host foreign students.

The Poxindeje school bets on recycling and reusing discarded materials donated by glassmakers or floor manufacturers, says Janet Calderón, who founded the Siqueiros school with Rodríguez five years ago. They even make murals out of garbage.