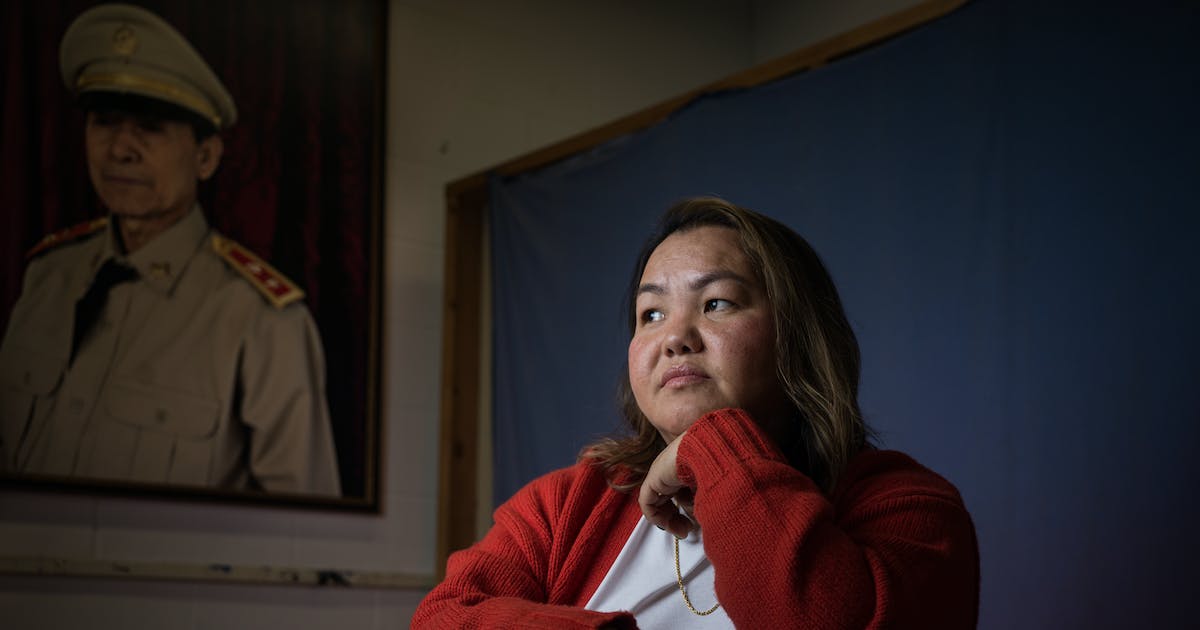 A lot has happened to photographer Pao Houa Her in the past year. In April, she became the first Hmong-American to be selected for the prestigious Whitney Biennial in New York. In July she opened a solo exhibition at the Walker Art Center, and in November she debuted a solo exhibition at Paris Photo. But Her believes that while she is certainly someone in the art world, she is not a celebrity in her own community.

“Sometimes I really enjoy the fact that I’m a nobody in the [Hmong] community,” says Her, 40. “I don’t have an audience — or the perception is that I don’t have an audience, so what I have to say doesn’t really matter. There’s something very powerful about that – not being a public figure and not having to answer to anybody has really helped me in the ways I’m able to work.”

Before her senior year, she suffered a devastating loss. In March 2021, her husband of nearly 20 years, Ya Yang, died of a sudden brain hemorrhage. They’ve known each other since junior high, and she said he was her biggest supporter. He was the person who believed in her even though she didn’t believe in herself.

Now, more than a year after Yang’s death and on the heels of an international art career explosion, Haar is the Star Tribune’s Artist of the Year.

Her Walker Art Center exhibit “Pao Houa Her: Paj qaum ngu/Flowers of the Sky,” named after the Hmong word for marijuana, explores the landscape of Northern California, where many Hmong farmers have moved to try their hand at to grow marijuana, despite anti-Asian racism in the region. Depopulated pictures, satellite photos and a double-screen installation inspired by “kwv-txhiaj,” or Hmong song poetry, give visitors a glimpse of this iteration of the Hmong diaspora.

This is typical for Her. In the project “My Mother’s Flowers,” she explored floral iconography in traditional Hmong aesthetics, and the ways in which some Hmong men search for “pure” Laotian women who are “not Westernized” on dating sites. In “Hmong Veterans — Attention,” she took portraits of Hmong veterans whose service in the Vietnam War was never recognized by the United States. In “My Grandfather Turns into a Tiger,” she traveled back to Laos, guided by a story her grandmother told her about how her grandfather, who served in the Vietnam War (known as the American War in Vietnam) turned into a tiger. and the town is haunted.

The oldest of seven children, she was born in Laos and fled to the United States with her family at the age of 4. She lived on the East Side of St. Paul grew up, graduated from the Minneapolis College of Art and Design and was the first Hmong-American to receive a Master of Fine Arts degree in photography from Yale University. She is an assistant professor in the department of photography and moving images at the University of Minnesota and has taught at many colleges throughout the region.

Her work centers the Hmong American experience, and her storytelling blends fiction and reality to create new diasporic mythologies. She never idealizes, but rather is critical of and asks questions about Hmong culture that others would choose to ignore.

Some of that aesthetic, Mouacheupao said, shows up in photos Hmong parents had their children take when they first came to the United States.

“There was a certain kind of attitude, flowers, clothes, everything, and Pao Houa brought it back and made it kind of contemporary, [made] her own version of it,” Mouacheupao said. “It was very familiar, and it’s an aesthetic that you kind of try to walk away from for young Hmong Americans, but Pao Houa brought it back in a way that I really appreciated.

“She has an aesthetic, but it’s also very intellectual and deeply rooted in culture. When you’re part of the community, it’s familiar … and I think there’s something very important about that familiarity.”

Photographer Wing Young Huie, winner of the 2018 McKnight Distinguished Artist Award, was one of the first people who helped Haar realize what she wanted to do. He is known for his projects “Chinese-ness,” a nuanced examination of identity that is part memoir and part documentary, “Frogtown,” a documentation of the ethnically diverse neighborhood in St. Paul, and his community-oriented project Lake Street USA

In his Frogtown project, “seeing the older immigrants on the street with their children reminded me of how my mother would have appeared walking the streets of Duluth, looking as if a part of her had never left China didn’t leave, while her children become cultured, Americanized,” said Huie.

“Seeing Wing’s work, what it did for me was that it helped connect these two different things for me – that I could tell a story with photographs and that the story didn’t have to be matter-of-fact, Her said. “There can be ambiguity in the photos, and that it can be a documentation of a group of people who can ask questions.”

When Huie saw Her’s work, he said, “I was struck aesthetically and emotionally. I recognize a lot in these photos – that they could be my family, and then a kind of unease unfolded.”

When Huie was invited to do a show at the Gordon Parks Gallery at Metropolitan State University in St. To guest curate Paul, he thought of Haar, who at the time was in the Yale graduate program in photography. In October 2012, shortly after graduating, Huie curated Her’s first solo exhibition, “Somebody”.

In a twist of fate, perhaps in one of the many ways that Haar and Huie’s lives crossed paths before they officially worked together, Huie took a photo of Haar’s uncle at the exact spot in Frogtown where many years later he died by suicide. In fact, Huie photographed many of Her’s family members.

In his images, she saw her people photographed for the first time.

Today she lives in Blaine, a quiet neighborhood, in the house she bought with Yang. These days the house is often filled with the sounds of her nephew Vince (6), niece Kaylee (7) and siblings Mai Youa and Julie.

When she was in graduate school, she made frequent trips back to Minnesota, sometimes every other weekend, thanks in part to Yang’s support, to take pictures of her community. She attended an elite Ivy League school on the East Coast, but her heart and people were in Minnesota.

“I’m just some photographer who happens to have a male name who sometimes takes pictures and does museum shows,” she said. “But it’s not a big deal. I kind of like this idea of ​​working in that sense.”